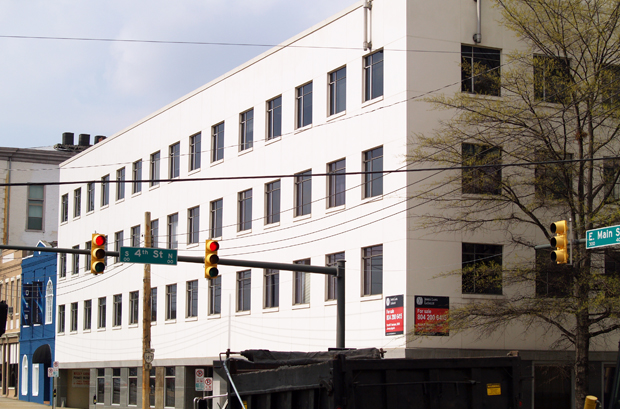 Howard Kellman of the Edison Companies has the Massey Energy building on the corner of East Main Street and Fourth Street under contract in a joint venture with the Monument Companies.

The two companies want to turn the 56,000-square-foot building into about 70 apartments, Kellman said Tuesday in an email.

The developers are trying to do the rehab as a historic tax credit deal, although Kellman said they were still “determining if the project will be eligible.”

Kellman said the neighborhood is centrally located and ripe for an influx of residents.

“It’s a section of the city that needs people,” he said. “It’s right near the slip, close to First Friday’s [Art Walk], close to VCU.

“VCU has done a great job [of bringing] the city along but before retail and restaurants come back to that neighborhood it needs a critical mass of residents.”

Kellman would not discuss how much the contract is for on the building.

Edison Company has worked with Monument Companies on a number of rehab projects around Church Hill. Monument has worked with other developers as well, including Marc Galt at Sensei Development on Shockoe Valley Heights.

“If we sell the building, we’ll likely find new space for the employees we have there now,” Pile said. “I don’t think we are getting out of Richmond all together.”

If the deal closes, there will be almost 600 new apartments in the area between Massey, the John Marshall, Miller & Rhoads and the First National Bank rehab.

Historic tax credits for what? The building is arguably the most boring looking building in the city.

Scott — looks mid-centry modern. There are very few examples of this in Richmond, but nontheless an architectual style. There is an apartment building nicely renovated on Tempsford Lane that also falls in to this category. Howard and Monument have done great projects in the past, this shoul turn out well for them.

I do not understand this project…Tax credits..Why? To make this building apartments makes no sense…there is no infrastructure to support it…Look at the old ABC building a block away…It now is a section 8 property that brings no value to anything other then pulling the real estate prices down in the area. How can you compare this project to the John Marshall…there is no comparison. This just sounds like a project that has a strong possibility of destroying this area of the business district by bring low class housing to the area if an when it fails…..what guarantee is in… Read more »

Next they need to redevelop the central national bank building on broad!

I don’t think this would work as a luxury apartment/condo development – I feel like that market is saturated and there are more attractive options elsewhere. It could work if marketed to grad students, undergrads, and working class professionals. The walk up Franklin Street to VCU from this building is very nice! Plus, Capitol Ale and Cafe Rustica are 1 and 2 blocks away. It is a very empty (and sketchy) area at night and on the weekends and that will surely be a turn off until more residents show up in this district. Mixed use would be an interesting… Read more »

This comment is to Mr. Massad, before you critisise the low income citizens you should go across the street from your office and clean up your own back yard,