Restaurateurs at the edge of the Fan are using a prime piece of real estate as a temporary parking lot until its municipal owner can sell it to developers.

Restaurants along Main and Cary streets are using the vacant lots around the GRTC bus depot on Cary Street for valet and employee parking, according to Jake Crocker, owner of Lady N’awlins and F.W. Sullivan’s.

“Right now we are allowing restaurant staff and friends of the restaurant staff to park there, and Selba is using the lot for valet.” said Crocker, who is also president of the Uptown Civic Association.

Crocker said that employees are allowed to park there from 5 p.m. to 2:30 a.m. as part of a security contract worked out with the property, owned by GRTC.

Steve McNally, the head engineer at GRTC, said the agency is giving the restaurants parking as a good-will gesture, provided they take out liability insurance.

The bus depot’s location has developers and restaurateurs salivating over the possibilities: retail, restaurants and apartments, all paid for in part by historic tax credits. The property will also boost the city’s tax rolls once it’s in private hands.

But McNally has had to tell them all to pump their brakes.

The century-old bus station, one of the first public transit hubs in the country, has decades of soil pollution that needs to be cleaned up before any new development takes place.

According to the Virginia Department of Environmental Quality, there are several feet of hydraulic fluid from old lifts and diesel fuel leaked from underground tanks in the soil on the property — damage that could take five years or longer to fix.

“We’re going to have to recover this product, and that’s going to take at least three years, because it’s a slow process of [extracting] the product, storing in containers and disposing of it,” McNally said. 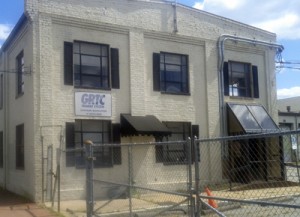 McNally said GRTC is required by law to get the soil nearly contaminate free. Faster clean-up methods are three to four times as expensive and risk damaging the historic property, he said.

(If the clean-up process damages the building extensively, it could endanger the historic tax credit possibilities, making parts of the property less valuable to potential developers.)

McNally said the cleanup process shields the company from a potential lawsuit and would make the property more valuable on the market.

The 6.8-acre property has already been sold — and unsold — once. Richmond Redevelopment & Housing Authority was set to buy the bus barn for about $5 million in 2009 before the mayor redirected the allocated money to the general fund.

The Reynolds North packaging plant, now under development for retail and apartments, is about the same size and sold for more about $13 million. WVS and Fountainhead Properties have committed about $35 million to the project.

GRTC is reviewing proposals for the removal of aboveground and underground storage tanks. McNally said that removing the tanks would cost about $1.1 million and that, once the tanks are gone, the company will start removing the hydraulic fluid and fuel from the soil. That will cost about $600,000, he said.

Robyne Bridgman, an official with Virginia Department of Environmental Quality, said that the spills in the soil didn’t represent a threat to drinking water but would pose a vapor risk if something were to be built over the affected area.

Bridgman said that once the product has been skimmed from the area, officials would have to wait a year to see if more of the fluid settles back in the area.

So until the mess is cleaned up, the bus depot will sit empty.

Crocker envisions the bus depot as a way to continue to attract nightlife seekers uptown.

“This area has really come around,” Crocker said. “Even in the past five years. The transportation options have gotten better, and more people are coming to this area. But it’s getting tight for parking. Something like a parking deck would really help.”

Crocker said the depot would also be a great location for new restaurants. The environmental issues, he said, are “a bit of a pain, but that’s how it goes.”

For now, he’ll have to content himself with some extra parking.

Why not sell the property “as is” and the developer must handle the soil remediation instead of the government? It would cut the cost and time in half.

No one will finance the property until it has been cleaned up.

See above – McNally said GRTC is required by law to get the soil nearly contaminate free.

It was not a bus depot. They were built as the shops for Richmonds extensive trolley system and in fact many of the buildings still have rails on their floors. Only after Richmond stupidly dumped its trolley system did the complex get converted to the garage complex for Richmond’s bus system.

These are shops and garage buidlings, not a depot.

Great idea using the location as parking while it’s being cleaned up!

Most thorough reporting I’ve seen done on the GRTC property. Thanks, David!

I’d love to see the shop/depot/whatever turned into a mixed-use community of studios, shops (even a garage!), and living space. I for one would literally leap at the chance to buy a combo studio/living space in exactly that setting. Really.

Great with the falling wall on Cary St, “the xxck the police” and other grafitti starting to show up, and the use as a parking lot for commercial vehicles (trolleys and a couple of smaller tanker trucks) and visitors to bars this is looking more and more like it will turn into the what the Blues Armory (old 6th Street food court) is a BLIGHT on the neighborhood. In three years, we will hear it will take another 5 to clean up the leaks from all the cars onto the newly cleaned soil!!