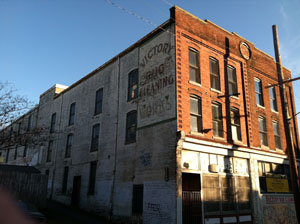 A small Richmond neighborhood is objecting to the planned development of a vacant building.

But some residents say that’s too many apartments, and they want Blundon to lower the potential headcount.

“We would prefer a plan closer to the original zoning,” said Jennifer Hancock, head of the Oregon Hill Neighborhood Association. “Personally, I’d like to see the two lots developed as single-family homes and maybe six apartments.”

Blundon filed a special-use permit application with the city last month for the project that would also include 18 parking spaces on an adjacent lot.

The current zoning for the property at 407 S. Cherry St. would allow what Hancock suggests, but there’s a problem: According to the project proposal, anything fewer than 18 apartments puts a wrench in the projects financials.

“Eighteen is the absolute minimum number of units for the building to remain a viable project economically,” the project proposal reads, going on to say that anything smaller would reduce the size and quality of the apartments and wouldn’t attract the young professionals the developer hopes to snare.

Blundon said the community doesn’t want more VCU students in the area, each with their own cars taking up spots in the neighborhood.

According to the proposal, Blundon reduced the density in the apartments after meetings with the neighborhood association from 24 apartments to 18.

Blundon bought the building, once owned by socialites Allen Mead Ferguson and his wife, Mary Rutherfoord Mercer Ferguson, last year for $600,000 at a bankruptcy auction.

The permit application calls for one studio apartment, six one-bedroom apartments and 11 two-bedroom apartments. Blundon said he is working with Xenith Bank to secure financing between $2.5 million and $3 million, or about $166,000 per door.

Hancock said she is preparing a letter detailing the neighborhood association’s concerns, which would be considered by the city during the permit process.

Neighborhood associations around town can be slow to embrace new projects. Last year, Rhode Island-based developer Gilbane had to trim its plans for a student housing development in Carver from 164 to 136 units after the residents complained about the density of their project.

On a more positive note:

Mr Blundon was warned BEFORE he closed on the property that the Neighborhood Association would oppose overly dense development and misuse of the R7 zoning so the argument on his financial requirements is not relevant. He knew exactly what he was getting into. This is the most absurd SUP proposal i’ve ever seen, from the parking scheme to the ridiculous amount of density and the part about “young professionals” and not not student based apartments. Blundon seems to have really wandered in from La La Land….

Blundon has a record of producing high quality developments whereever he’s been in the Richmond area. He has a social conscience. I’m betting he’ll produce an extremely well done apartment house on this property and it’ll be well managed.

I will be watching this one closely because I’d consider renting one of the units when completed.

Oregon Hill residents would not know what to do with themselves without some kind of development to oppose!!!

It seems like this property could potentially bring better residents to the neighborhood than those who currently reside in the unkept rowhomes. However, the density to available on-street parking does seem like an issue.

I would consider a 2 bedroom apartment in Oregon Hill. It’s an ideal location! I hope they are considering allowing large dogs, since my huge, lazy English Mastiff is acutally rated as a perfect apartment dog. Did I mention that he’s really lazy? I attended Open High School for a time and then went to VCU, I’d love to live there now and would appreciate the opportunity to rent while considering where to buy.

I’m not sure additional parking on the street would be an issue if he has proposed a parking lot.. I don’t know the particulars so I won’t throw dirt at anyone but from my perspective, a new small apartment would be better than what is there now…a run-down vacant commercial property. Richmond on a whole seems to run into this a lot. The people who live in the neighborhoods have a vision for what they want but not the financial ability to do it. Is it worth it as a community member to allow the improvement of your neighborhood even… Read more »

I will never understand why anyone would want to live next to an abandoned building. We live in a city, Oregon Hill is about a mile from downtown, and the entire area was once much denser than it is today.

As one of the affected residents, what we are objecting to is not only the parking. We are objecting to the need to baby sit what are basically overgrown highschool students who have no parental supervision. Mommy and Daddy come in and rent or purchase an apartment or residence, install their kids in them, then leave them to their own devices. The kids have no clue they are living in a working class, family neigborhood, and possess very little sense of responsibility. Graffiti, parties, wandering the streets at all hours shouting at each other. Their parents wouldn’t put up with… Read more »

This has been discussed.

While I know that students can sometimes be noisy neighbors, anyone who moved to Oregon Hill in the past 20 years or so should have been aware that living near students is a distinct possibility. I’m sure some people will vehemently disagree but that whole area from Oregon Hill up through Carver and down to Jackson Ward has benefited greatly from VCU and without VCU I think there is no doubt that entire area would be pretty desolate. When VCU expands and more students come that drives development and empty buildings such as this one to be renovated and reused,… Read more »

Did it occur to those in opposition that Oregon Hill has seen a “complete overhaul” at least partly due to VCU’s investment in the greater Fan/Oregon Hill/Monroe Ward/Carver communities? The reality of the situation is none of us can control who rents apartments around us. The market will always dictate who lives where, and at $166k spent per unit, rents will likely be over $1,000/month for a 1 bedroom. That amount means most college students would only be interested in the 11 two bedroom apartments, and not the 7 smaller units. Adding more apartments to the area will more than… Read more »

Oregon Hill Neighbors support the development of this property under the current zoning. Oregon Hill Neighbors do not support the Special Use permit proposed by the developer. If the developer wants to get the neighborhood’s support for a different SUP he is welcome to propose something else. If you saw the proposal you’d see the parking spaces proposed are not even large enough to be considered “compact” spaces. The developer paid 600k for the property and knew the risks. He is a business man and does not need the neighborhood to help bail him out of a bad business deal.