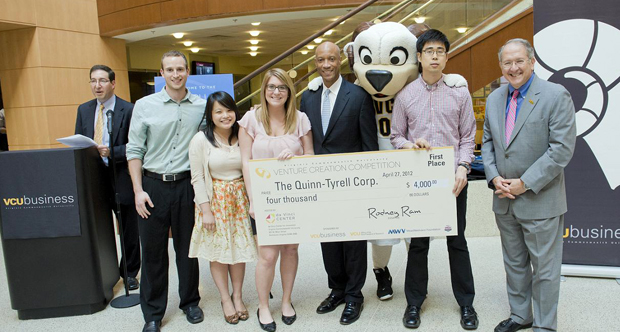 Of the 40 teams that submitted entries, five finalists pitched their business plans to a panel of 12 judges last week.

Brian Jang said the idea came about while working on a project for a class this semester.

“One question that seemed fun was what’s going to be the new cupcake?” said Jang, 35.

Jang said the group plans to use the money to cook up some new recipes, market the product and pay for living expenses while they’re still in school.

VCU School of Business students Austin Callwood, Justin Kauszler and Joshua Newton took home the $3,000 second place prize for CycleStay, a bicycle rack system with an electronic locking feature. The device would send a text message to the user’s phone if someone were tampering with the bike’s lock. Users would buy a monthly membership to reserve the locks.

Third place went to a group called Fourpoint Art, which pitched a website for artists to promote their work. Owen Duffy, a VCU School of the Arts graduate student, won $2,000 for the idea.

Two other finalists were awarded $1,000 each to put toward their potential businesses. A group called Control pitched a medical device connected with an app for asthmatics to monitor their condition, and Gryffindo proposed a 24-hour art supply store.

Kenneth B. Kahn, professor and director of the Da Vinci Center for Innovation, said this year’s event was the first competition open to all VCU students.

“One of the elements was to encourage students to take things forward past the research stage,” he said. “It’s an opportunity for them to get in front of people and use this as a vehicle for their ideas.”

Kahn said he’s already secured funding for next year and plans to hold the competition each spring.

Love this idea! Ice cream cones are like styrofoam…I’m all for a positive change!