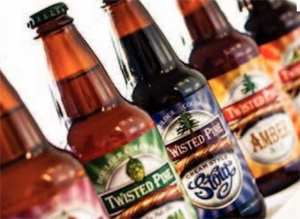 A Boulder, Colo., craft brewery known for one of the spiciest beers on the planet has landed in Richmond.

Beers from Twisted Pine Brewing Company have been picked up by locally based Brown Distributing and are available at some restaurants and retailers across town.

Richmond is the only Virginia market selling Twisted Pine, said Jacob Brunow, craft and import manager at Brown. It’s all part of Brown’s push to put Richmond on the craft beer map.

“We’re adding beers that are only available in Richmond to start off with – exclusive only to Richmond. We want Richmond to beer-centric,” Brunow said.

One of the biggest beer distributors in Richmond (the company distributes Anheuser Busch), Brown has picked up 20 to 30 craft beer brands over the past year or so.

Brunow said Brown got its first sip of Twisted Pine Beers two years ago at the American Beer Festival.

Brown then signed the brewery up for distribution in its Florida markets. But it took a little longer to work its way up to Richmond.

“[Twisted Pine] is not the biggest brewery in the world, so they are looking to come into markets that are a bit smaller,” Brunow said. “It works nicely in our Richmond market, which has eclectic taste but is kind of a smaller market.”

The beers are being sold at local beer and wine shops like Once Upon a Vine, Total Wine, Corks & Kegs, River City Cellars and Elwood Thompson’s. They are also on tap at Capital Ale House.

One of the beers that isn’t here yet is Twisted Pine’s Ghost Face Killah, a beer made with the Bhut Jolokia pepper, also known as the ghost pepper.

…..and when you find out how much they want for a 4 pack you’ll do what I did and PUT IT BACK! They are really proud of that stuff.