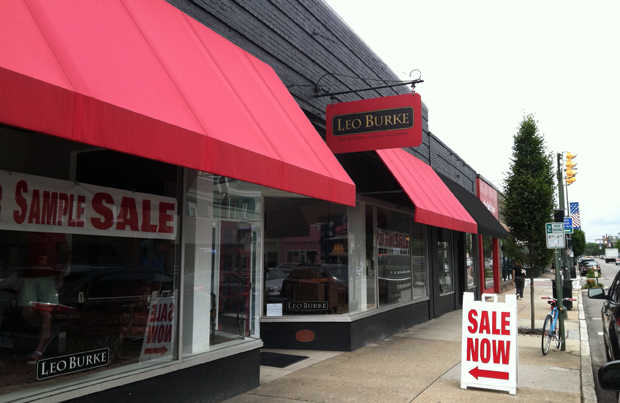 A Carytown fixture is calling it quits after five decades.

Leo Burke Furniture will close this summer after it sells off its inventory. It announced the pending closure last week in a brief paragraph on its Facebook page.

“We decided that now is the time to do it, and we’re going to do it while we’re on top,” said Jack Burke, president of the company and son of founder Leo Burke.

The store has been in the same block of Carytown since it opened in 1958.

“I’ve done it for 33 years. We’ve been in business for 54 years,” Burke said. “We’re looking at trends and so forth and felt like now is the time.”

The store has been in its current location at 3108 W. Cary St., between Belmont and Auburn avenues, since the late 1960s.

There was a steady stream of customers Wednesday, with people stopping by to pay their respects and browse the sale.

“It’s just the end of an era,” Burke told a customer who came in to wish him well. “Time marches on.”

Leo Burke’s seven employees are sad about the news, Burke said, but also understand the move.

“People have certainly changed their buying habits. Channels of distribution have shifted,” Burke said. “A lot of vendors that were important to us have gone out of business. Each time that happens, it has an impact. We felt like this isn’t going to get any better.”

The store has started a going-out-of-business sale and will start advertising it in coming weeks, Burke said.

The company owns its 9,000-square-foot store and plans to lease the space once it closes.

“We don’t have any intention of selling it,” Burke said.

Burke said that word has been spreading and that he’s received calls from people interested in the space.

“This is a good time to be a property owner in Carytown,” he said.

Burke, who was born the year his father opened the store, said the closure will mark his retirement from the retail furniture business. But he will look to continue to work in the furniture industry in some capacity.

Leo Burke is the second longtime Carytown retailer in recent months to decide to shut its doors.

Nearby Pirouzan Oriental Rugs announced this year that it would close after 27 years. Its owner made the announcement on its website.

Leo Burke’s storefront shouldn’t have a problem finding a tenant, he said.

“The location is good. It’s challenged on parking,” McVey said. “But it’s in the right block. I’d say that [it] is one of the better blocks in Carytown as far as [customer] traffic.”

Retail vacancy rates in Carytown are down from last year, he said.

Rental rates on retail space have also dropped to an average of $15 to $17 per square foot per year, McVey said.

It is sad to learn of this closing and Mr. Burke and his store have certainly been an asset to Richmond.

It would be great, and a service to the community, if BizSense could share stories of perserverance also. La Diff is also an asset to this community and many business owners could benefit from knowing how they are managing to retain their customers and business during some of the worst furniture times ever. Is it innovation? Determination? Frugal financial management? Stories such as this could benefit other RVA businesses.

To Jack and all the Burke family, I am saddened by the news of your closing. My parents, Doug and Sara, were fast friends of Peggy and Leo. My father and Leo were very close friends in addition to their business relationship through Meadowcraft, Brandt, Stroupe, and other manufacturers. I will relay the store closing and end of an era to my dad. Please give my best regards to Mrs. Peggy and the entire family. (I last visited with Peggy at Mrs. Henderson’s funeral a year or so ago). You are all wonderful, and I wish you the best going… Read more »

Leo Burke was an institution in Richmond, and Jim, Mike and Jack were finest staff in town to work with. They will be missed.

When we were first married, we purchased our dining room furniture at Leo Burke and have enjoyed the store and its dedicated staff for years. They will be sorely missed.

These Four Walls was entirely too high for the type of merchandise they were selling. I once went in there and saw a wooden box for $95. It didn’t look “special” or anything…perhaps it was an antique. Nevertheless, I’m not spending $95 on a small wooden box when I can go to Homegoods and get one for $7. La Difference can be pricey, yet you can find some really good deals in there. Plus, they have different styles of furniture as opposed to the same oversized lumps of MDF that Haynes, Room Store etc. sell or the George Washington/Thomas Jefferson… Read more »

We lived West of the Boulevard for many years;
and have fond memories of philosophising with Leo Burke. Or even, occasionally, of buying some of the wares! Jack’s comments regarding the disappearance of old-line trusted vendors and other changes of relationships is a reminder that not all change is progress. The City was a better place for having known the Burkes