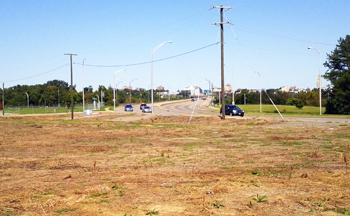 Atlanta-based Bridgeland Development has applied for a special-use permit with the City of Richmond to construct a 50-unit, 72,000-sqauare-foot apartment building.

The $8.8 million project is being financed through the Virginia Housing Development Authority and is using low-income housing tax credits. Bridgeland primarily builds projects for low-income residents.

Gary Hammond, a principal with Bridgeland, said his firm is working in Virginia because the state is friendly to outside firms competing for low-income housing tax credit dollars.

“Oftentimes developers in our particular niche can only get one or two tax credit deals per year per state, so it’s not uncommon for developers in our field to cross state lines,” Hammond said. “Virginia is very pro business and fair to out-of-state developers.”

The Belle Summit Apartments will be built on a vacant lot on near Cowardin and Springhill just across the Lee Bridge from downtown Richmond. Hammond said that his low-income apartments and the residents he’ll be accepting shouldn’t be confused with Section 8 housing.

“A lot of people hear the phrase ‘low income’ and have the bad connotation of Section 8 housing,” he said. “In Section 8 projects, a majority of the residents have subsidized rent and the apartments are occupied by people, in many cases, who don’t work.

“Section 42 [low income] housing is designed for good, hardworking people who just happen to make what is defined as low income. Nobody is paying their rent for them.”

The general contractor for the project is a division of the company called Agile Construction. Most of the work will be done by local subcontractors, Hammond said.

Bruce Milam, a broker with Colliers International (formerly Grubb & Ellis | Harrison & Bates) who represents the Manchester lot’s owner, said that the deal on the land should close this fall and that the project should break ground in December.

“I’ve been representing this property for about a year and a half,” Milam said. “We were marketing it as both apartments and a retail location and dibs to whoever came along first. Bridgeland Development seems like a classy group.”

Great news for Machester, and continues the vibrant mix of housing available in the downtown area. But I really have to question his description here: these will be “good, hardworking people.” Soooo… those in Section 8 housing are by definition bad and lazy people? Really?

I wish the developer success in his endevour and this property is and has been an eye sore for years. However no matter how anyone spins it this is a housing project. A concentration of low income housing in one area. Also lest anyone forget these will be built to section 8 eligible standards to “go there” if they cannot be rented out. Thanks for the report Biz Sense keep them coming!

Robert, your college Logic teacher would give you an F for that inference. If I say that the sheet is white, that doesn’t infer that the rest of world is black. You are reaching.

Bruce, I agree, its not logical to assume what Robert commented on, that all section 8 are not good hard working people, and I think Robert is not actually inferring he thinks that, BUT we live in an age of nuanced soundbites and hyper sensitivity where logic is not related to perception. I winced when I read that, as while I get what you are saying, many others will not. As a realtor representing this you in the “rock and hard” place situation some will complain about too many low income people and others will say the more comfortable need… Read more »

From a design perspective, why do all of these new developments look the same (boring)?

Nice….and correct response! In the late 80’s I had the pleasure of developing the Manchester Medical Building with a committed partnership of several of Richmond’s leading physicians at the corner of Bainbridge & Cowardin. Still have an old pedestal water fountain from the shuttered school we demolished to make room for state of the art medical services to the south Richmond/Manchester community.
This will become a signature addition to the community and south Richmond!

I have long felt the Manchester area, on a hill, with a wonderful view of the city, adjacent to a marketable and development rich community would be a NO BRAINER as a location for the new ball park. Why is that not being discussed seriously? It is close to downtown, but not IN downtown. There are large businesses nearby such as Sun Trust and UPS. There are adequate avenues for traffic to all parts of the city. It is centrally located, and near most of the fan base for the Squirrels. The Manchester area is potentially a dream area for… Read more »

Tom, I agree. I always get excited for new developments around town but they all seem so boring and lack character. These developers tend to only want to pay for functionality and are not willing to pay for something with actual character to it.

Sounds like a pretty good deal. All of these $1,500 apartments that are springing up are great, but what about regular folks? Seems like a pretty good fit for that area which is all small rental houses for the most part. Heck for that view and half the rent of those other projects, I’ll apply! Great deal.

anhonestview- Your statement of “area is all small rental houses for the most part” could not possibly be more incorrect. I live in that area – just south of Lee Bridge behind River Tower – and we are an area of predominantly owner occupied homes with rentals being the exception. Many, many of our owner occupants have lived in the neighborhood for extend periods as well. So basically, you don’t have the first clue what you are talking about. I’ll guess we’ll find out about the “good fit” part, but agree that these new apt. buildings are super boring and… Read more »

It’s interesting that this article does not point out the fact that this property is zoned as General Business B-3 which is mixed business use. The City of Richmond has stretched the zoning guidelines to approve of putting an apartment building with no commercial space on this property by calling the resident parking, commercial use. It is quite obvious that this apartment building is of sole residential use, with no real commercial use. Why do we have zoning codes if the City of Richmond refuses to follow them?

Springhill is an old and Historic neighborhood. We once housed a civil war battery overlooking the prison camp at Belle Isle, an old mansion on the hill over Manchester and was one of the first suburban neighborhoods along the Forest Hill trolley line. We have 52 single family homes, of which 35 are owner occupied. We have 4 duplex detached and/or townhomes and 3 large apartment buildings towering at 4, 6 and 15 stories above the modest 1 and 2 story homes. A large 4 story solid block and a half apartment building with 200 homes is planned on the… Read more »

Well said, Springhill Neighborhood Association. It would be great to have something more like the Oregon Hill development.