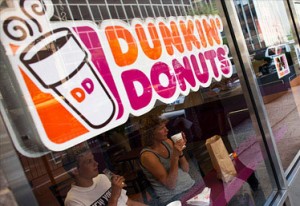 A national doughnut chain is opening its first store in the City of Richmond in Carytown.

Dunkin’ Donuts is about to begin construction at the former 7-Eleven building at 11 S. Nansemond St.

“We took over that project at the beginning of this year,” said Peter Vick, a broker with NAI Eagle who represented the landlord. “We were surprised by the lack of action it got early on. I think people were still trying to wrap their heads around the Fresh Market thing. And once people saw it was actually happening, we started to get a lot more traction.”

Vick said his firm was seeking more than $30 per square foot per year in the 2,300-square-foot building.

“We knew that locals probably wouldn’t go for it at that price, but we thought the corporate stores would come in a lot faster,” Vick said. “We’re really happy with Dunkin’ Donuts though.”

“We’re looking in the VCU, Shockoe Bottom and Tobacco Row areas for more locations,” she said.

City records show that Midlothian-based Fas Trac General Contractors has a recently approved permit for the build-out. The estimated cost of the work was about $85,000.

The store is corporately owned and not a franchise, McNamee said. There are four other Dunkin’ Donuts locations in the greater Richmond area.

Dunkin’ Donuts is following other chain stores into Carytown. Fresh Market opened last week, as did Petco and Panera, at the new shopping center at 10 Nansemond St.

Raul Cantu, owner of Nacho Mama’s and head of the Carytown Merchants Association, said Carytown is in a transition.

“Every few years, Carytown changes and sort of reinvents itself,” Cantu said. “This time we are getting the big boys to come play with us. They are realizing that Carytown is the place to be, and I think it’s a good thing. It’s good to see the vacant stores filling up, and it’s good for competition.”

Dunkin’ Donuts will compete with the locally owned Dixie Donuts, which is on the other end of Carytown near the Boulevard.

A call to the Dunkin’ Donuts corporate office was not returned by press time.

For more on the local market for sugarcoated fried dough, check out this piece about Country Style Donuts on Williamsburg Road.

I disagree that this is a good thing. More national chain stores that bite at $30/sq ft might be OK for the leasing agent, but probably doesn’t bode well for locally owned stores in the area. Competing with national chains for mindshare, advertising budgets, and foot traffic means that more landlords in the area will feel empowerd to charge similarly inflated rates, thus squeezing more locals out of the boutique shopping area. I can’t imagine that my friend Raul would feel the same if it were a Moe’s or a Taco Bell moving in. What goes into the grocery store… Read more »

Its replacing a 7-Eleven…

No Rissa it’s not. It’s replacing a vacant building that was for lease. 7-11 closed down, not sold out.

Since the Richmond area is being overtaken by “come heres” from New England, NY, NJ, and PA … you better understand donuts.

Scale 1[Poor Excuse for a Donut] to 10 [can Angels make theirs any better?].

Blackbeered… Every city in the southeast is being (or has been) overtaken from those up in the northeast. So get used to seeing more Dunkin Donuts.

With Dunkin Donuts coming to town, heavy greasy Krispy Kreme’s days are numbered. Too bad we don’t have a Polish bakery around here. The home made Polish paczki (panch-kee) we used to get from Johnny Kulak’s in Finderne were the best.

The problem with Dunkin is that there are never enough people working in there. The one on Staples Mill is a joke. I don’t even know how they stay in business. Starbucks works because they are a well oiled machine. People want to get in and out fast. At Dunkin they have one person who works the register. This person also makes the drinks, prepares the food, and boxes the donuts. The times I have been I have seen 15 people in line at the one on Staples Mill and half eventually walk out. Also, I agree with the argument… Read more »

The Westhampton Bakery on Patterson has the BEST donuts in the City, hands down.

Wow, some people do not remember when Richmond had several Dunkin donuts. All but Staples Mill closed by the early 1990s. Enterprise rental near Horsepen was one, Donut Connection on Hull Street was one too. I think metro we had 4-5 when I was a kid. (used to go every Sunday as a treat to get us up for church). And the history of small space, national restaurant chains in Carytown does not bode well for this store. The location is HARD to find and get in/out of. And the space and parking are TINY. Think of the Ben and… Read more »

WTF is wrong with you people? Do you WANT Carytown to be cannibalized by corporate mediocrity? Or would you rather have outstanding local food and retail artisans painting the unique flavor of Richmond’s favorite street?

Will still frequent Dixie Donuts, but could see us swinging by Dunkin to pick up their K-Cups

Dunkin Donuts has my favorite coffee and, as a Fan resident, I am happy to see them open a location that is convenient for me. 7-11 was a chain, so this does not add to the net amount of chain stores in Carytown. I don’t buy that argument, nor do I think any local business would have taken over the 7-11 property.

I believe the Staples Mill Road Dunkin Donuts is a franchise, while the Carytown one will be corporately owned. For this reason, I expect that there will be better service in Carytown.
Hopefully that will be the case.

I’m hoping this place goes out of business as fast as Ben & Jerry’s did. Carytown, and Richmond, should not support this especially when there are other great, locally owned options. People do realize that Dunkin doesn’t even make their own donuts right? They come in frozen on a truck and are pulled daily, thawed out, and iced/glazed as needed.

I agree with you, but if people cared where their food came from, that McDonalds would have been out of business a long time ago. Long live Capital Coffee and their incredible HOME MADE baked goods!!

Just in case anyone was wondering, here is a video of how Dunkin operates. Factory made and shipped in from outlets, AKA NOT MADE FRESH!