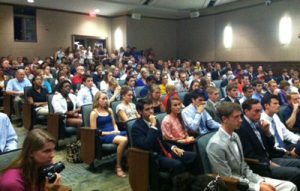 The University of Richmond considered saving its men’s soccer and track teams by increasing its athletics budget, but that would have been too costly and changed the makeup of the student body.

That was one of the explanations UR President Ed Ayers gave Sunday to a crowd of about 300 at a forum organized by athletes, faculty members and alumni in the wake of the school’s announcement that it would drop men’s soccer and track and add men’s lacrosse to its athletics lineup.

At the contentious meeting, Ayers said the school’s decision was final.

At issue is the school’s compliance with Title IX, a law that requires schools that accept federal money to offer an equal number of sports roster spots to men and women.

In April, UR said it was not going to upgrade men’s lacrosse from a club team to Division I. The track and soccer teams were safe, they were told.

But in mid-September, UR reversed that decision and announced it was upgrading lacrosse to a varsity sport with scholarships. To keep the number of male and female athletes the same and comply with the law, the school said it was cutting men’s soccer and men’s indoor and outdoor track. 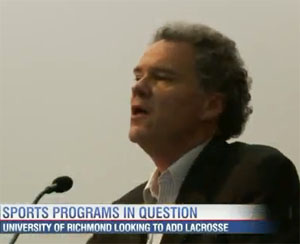 Ayers said Sunday that the school had studied adding women’s sports to remain in compliance and avoid cutting the men’s soccer and track teams, but that move would cost more than $1 million a year and require a $20 million increase in the school’s endowment.

He also said that the school didn’t want to change the makeup of incoming classes, which are usually about 13 percent athletes. “That is the highest percentage of athletes among any other school that we compete with for students,” Ayers said, adding that he was not willing to take away from students with non-athletic interests to increase the focus on sports.

The cancelation of the two sports in favor of lacrosse has created a maelstrom on campus.

In the past week, groups of alumni and students have sprung up in attempts to save track and soccer. Track boosters bought a full-page advertisement in the school newspaper with an incendiary tagline “Money can buy a lot of things, like this ad or even a lacrosse program, but it can’t buy honor.”And soccer alumni started working with a public relations firm.

Ayers, who at times seemed exasperated by interruptions at the forum, said the lacrosse program will cost the school about $400,000 a year. He said a $3 million multi-person donation would serve as an endowment to fund the program.

Several media outlets have speculated that one of the big donors is Paul Queally, a UR alumnus, Wall Street financier and member of the board of trustees.

The school’s student newspaper, the Collegian, cited an unnamed source in a report that said Queally had been described as a regular donor to the men’s club lacrosse program.

Queally said in an email to BizSense that he would not comment on the board’s decision to cut soccer and track and did not respond to a question about whether or not he donated all or the bulk of the $3 million used to start the program.

Chris Hoerner, a junior midfielder from Middleburg, Va., said soccer contributes to diversity on campus. “[The board] has let one large donor, who is also a board member, influence the decision by waving a check in its face,” he said.

Ayers said Sunday that he had decided last spring to cut the men’s soccer and track programs and that, once funding became available, the school would add a lacrosse team.

“At the time, I didn’t know if that would happen in a year or in two years or long after I leave this job,” Ayers said. “It turned out that [the donations] came in faster than we expected.”

In response to whether the decision was influenced by one powerful board member, Ayers was direct: “The answer is no,” he said.

“The members of our board serve out of a sense of loyalty and a sense of responsibility. They are smart, experienced and independent minded. And not one of them is a pushover or would take direction from another member as has been suggested,” he said.

In a document prepared by Richmond’s athletic department in advance of the decision, the school said lacrosse is the fastest growing sport among high school programs and that the school could still compete in a small Division I field.

“Because there are only [61] Division I men’s lacrosse teams, the university has the opportunity to build a highly competitive men’s lacrosse program while the field is still relatively small,” the document said.

According to Ayers, the school is saving $100,000 a year by cutting the track and soccer programs, freeing up roster spots for other sports and creating three scholarships for those sports.

There are 23 men on the track roster. Most of those men participate in both indoor and outdoor track, meaning each man fills two roster spots. So by cutting both programs, the school opens more than 40 spots. They open an additional 26 roster spots by cutting the men’s soccer team.

UR Athletics Director Jim Miller said after the forum Sunday that the lacrosse team would take about 42 roster spots.

“That leaves us with more than 20 spots that we can use to bring down the number of women on sports with rosters that are too big and gives us room to add more roster spots on men’s teams that are underserved,” Miller said.

As an example, Miller said the women’s soccer team has about five too many roster spots in an attempt to comply with Title IX. That means that not all the women can travel with the team to away games.

Men’s track and field has no scholarships. Men’s soccer has eight. Those scholarships will be transferred to the lacrosse team that will launch in 2014.

You can read an RBS investigation about the business of big-time college football in Virginia here.

Watch a video from the forum courtesy of CBS 6 News:

Great job by the young men and women to stick up for these programs and ask tough questions. Keep up the fight!

I am sure this decision was not an easy one and that many people are upset by it but Lacrosse has grown with leaps and bounds in the last 10 years and this is the right move for the school. I played both sports in high school and lacrosse in college and love to see it grow.

To the other uniformed Phil…Have you ever been to upstate NY??? I am a UR grad, and I hail from the Syracuse area. Since you are unfamiliar with the area I will take a moment to inform you. There are plenty of private schools up this way who have lacrosse programs, as well as plenty of public schools. A diverse mix if you will. With the exception of West Genesee though, the majority of talent comes from high income private AND public schools(Cazenovia,Fayeteville-Manlius,Jamesville-Dewitt, CBA,MPH), many of which are lacking any sort of diversity. A majority of the residents around here… Read more »

Well, Morgan, considering he didn’t mention anything about you calling UofR elitist, I’m assuming that wasn’t it. Maybe you should read more carefully so you can be more “informed” when you ask questions.

“go tell that to all the kids playing it in Syracuse NY where there aren’t any private schools…” If i’m not mistaking, this phrase would lead one to believe that just because lacrosse is played in public schools, then it is not an elitist sport

or was that meant to say something else? It’s called reading between the lines, Marc

Pardon me Morgan, but as a current student I can assure you that we are in no way an elitist school. I myself come from a middle class background and although I do have ambitious aspirations for my future, I in no way think of myself or my school as superior to the rest of society. It seems to me that you are equating wealth with elitism which is really a tragic assumption. There is no denying that we have a significant number of students coming from extremely prosperous backgrounds, largely from the Mid-Atlantic and Northeast, but in my years… Read more »

Phil and Marc, perhaps you should look at the demographics of Lacrosse. 75% of the athletes participating in Lacrosse come from families with incomes over 200,000 a year; less than 10% come from families that make under 50,000 (USA Today, April 2012). According to the Department of Education and Equity, Lacrosse’s diversity over the last 10 years is 1.7%. High School Lacrosse is only sanctioned in 21 states, 16 of which are on the East Coast (USAlacrosse.org). Lacrosse is a regional, wealthy, monotonous sport. Is it elitist? That’s something everyone will debate on. These, however, are the facts.

Wow, they left this little nugget out at the information session as we visited the campus late summer as one on our son’s short list. I wish I’d seen this before he slaved over yet another admission essay for this university’s supplement. It is now off the list. I would like to know how Highpoint was able to add a Lax team w/o cutting other teams. BTW my son also plays lacrosse and we are from a private MIAA high school but this smells funny. Hate to say it, but there is no doubt diversity will suffer. Yes lacrosse is… Read more »

From personal experience, I’d have to say that lacrosse isn’t a sport that encourages diversity. No high schools in my area had lacrosse; I also find it odd that lacrosse is replacing two of the most participated Olympic sports in existence.

A law that perverts a decision to add opportunities for students by requiring the elimination of other opportunities needs to be revisited. I still cannot believe the interpretation of the law requires the counting of student-athletes who pay full tuition to run around a track or any other sport towards the equality provision of the law. It is dumb and it would have been impressive if the school did everyone a favor by challenging that bean counting methodology to promote equal opportunity. Under this absurd standard, the school needs to get rid of the yellow bikes and the frisbee course… Read more »

The decision is a shameful one for U of R’s administration. They are looking only at the $$ dollar signs and the community they want to draw. Its a school that is a Virginia school in name only. Cross Country and Track and Field are sports in the Va high school system that is growing and is considered by many as one of the best HS Track and Field programs in the nation..Shame on U of R for turning their back on their running programs and all Virginia High School Track and Field athletes..Its the last straw for me..I’m done… Read more »

Come on, guys…U of R is just following the Golden Rule – “He who has the gold…” Lax is a niche sport with a high concentration of $$$…it will rule where it is allowed. It costs a lot of money to play and makes a lot of money for equipment manufacturers, who will gladly promote it. It’s the new Spring Football (just better stay out of the way of the BIG BOY).
Pretty soon U of R will have only 3 mens’ sports…unless baseball can play during summer school.