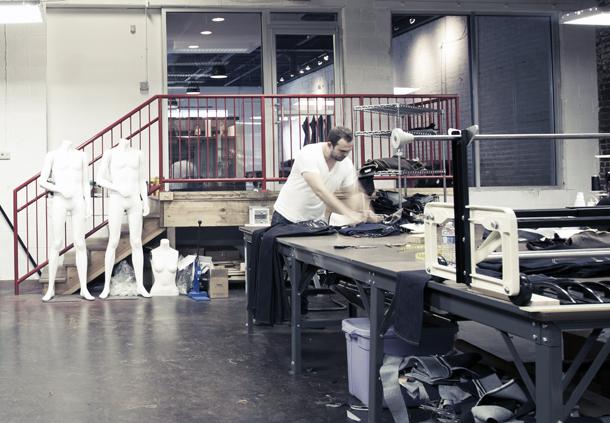 Shockoe Slip is about to get a little more fashionable.

Shockoe Denim, a custom jeans company at 13A South 15th Street, is set to open Thursday.

“Right now, we want to focus on getting our name out there,” said Anthony Lupesco, who owns the company and designs the jeans.

He said Shockoe Denim has about 200 pairs in stock for the opening.

The jeans, which are available for men and women in several fabrics and styles, will cost between $175 and $225. For a higher price, customers can request a made-to-order pair in any size or fabric. All of the jeans are designed and stitched in-house.

Lupesco said he expects most of his business will be wholesale. He’s working with a few East Coast retailers to sell his product, but said he thought Shockoe was a good home base for the store.

“I can’t imagine opening this shop anywhere else,” Lupesco said. “No other neighborhood in Richmond has as much soul or character.”

Lupesco said that he was aiming for an August opening but that a few mishaps pushed him back.

“I have a background in apparel, but I’ve never worked in production,” Lupesco said. “It’s definitely been a learning process.”

He said he had some trouble hiring his staff, and a mix-up with one of the machines cost him production time. About three months ago, Lupesco decided to recruit students from the design school at Virginia Commonwealth University.

“I really should have looked there sooner. There’s a great talent pool,” Lupesco said.

Two senior tailors oversee a staff of three design students, and Lupesco said he wants to hire a few more employees after the opening.

Faatima Muhammad, a senior in the fashion design program at VCU, started working at Shockoe Denim in mid-July after finishing an internship at Ledbury, a local shirt maker.

“Working with denim is completely different from anything I’ve ever done,” Muhammad said. “It’s extremely precious, extremely meticulous. You have to be very detail-oriented.”

It takes about four hours to finish a pair of jeans from start to finish, Muhammad said. Everything element of the product is cut and sewn by hand, she said.