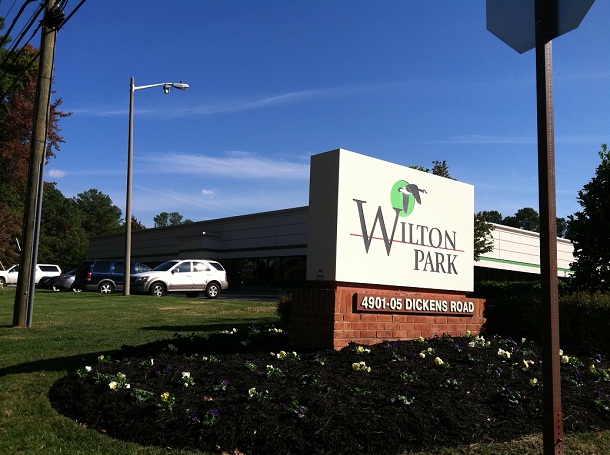 The Wilton Companies headquarters at Dickens Road and Staples Mill.

A bankrupt local developer will soon lose his remaining stake of the real estate company founded by his father.

Hank Wilton, who owed more than $70 million when he filed for bankruptcy in 2010, must relinquish his shares of the Wilton Companies in an attempt to pay back at least a portion of what is owed to dozens of creditors, according to a deal proposed this week in federal bankruptcy court.

In the deal orchestrated by a bankruptcy trustee, two principals of the Wilton Companies acting through an LLC agreed to pay almost $900,000 to purchase Hank Wilton’s 1,400 shares of the firm. But the public would likely get the first crack at bidding on the shares if the process gets court approval in November.

And in lieu of hiring an investment banker to try to broker any deals, there’s a fat finder’s fee ? $25,000 ? for anyone who helps bring in a successful bidder at more than the LLC’s bid.

This is Poole and Johnson’s second attempt to gain control of Hank Wilton’s shares since his bankruptcy filing.  The Wilton Companies develop, own and manage shopping centers, apartments, offices and other properties across Richmond.

Through Mountain Investments, Poole and Johnson acquired a debt note against Wilton from Hampton Roads Bankshares. That gave them to the ability to threaten to foreclose on Wilton’s family home and potentially force his wife into bankruptcy if he did not agree to the initial deal.

At least one of Wilton’s creditors at the time disagreed with the sale, and it was put on hold.

The last obstacle in Poole and Johnson’s way will likely be a stalking horse auction process in which Mountain Investments sets the base bidding price and the public can offer more for the shares. The set price values the shares at $630.91 each.

“I’ve just been liquidating assets,” said Keith Phillips, the trustee for Hank Wilton’s bankruptcy case. “The major asset in the case is the shares of stock in Wilton [Companies].”

Should the judge approve the stalking horse process, Phillips and his team of attorneys will publicize the sale of the shares to drum up interest.

“The hope is people will be interested enough to want to create a bidding war,” Phillips said.

The entire process is an effort to recoup some money for Hank Wilton’s many creditors.

Mr. Wilton filed for Chapter 11 bankruptcy protection in September 2010, unable to carry the debt on residential real estate projects. The case was later converted to a Chapter 7 liquidation, which revealed that he had assets of $13.9 million and liabilities of $93.2 million.

He had personally guaranteed many real estate deals often using shares of the Wilton Companies as collateral.

But once the economy and real estate market tanked, the value of his real estate plummeted, and the debt was too much for him to carry. Banks began to foreclose on the many of the properties prior to his bankruptcy.

Phillips said he has recovered a couple of hundred thousand dollars through the sale of some of Wilton’s personal household furnishings. Hank Wilton bought back many of his belongings, which included items such as jewelry, art and sports equipment.

Phillips also reclaimed dividends from the Wilton Companies paid to Hank Wilton and sold off a golf course membership.

Even with the pending sale of the shares, the recovery of assets will likely fall far short of repaying Wilton’s creditors.

“Like a lot of real estate developers, he took it on the chin,” Phillips said. “Some of his business interests have some value, and many of them don’t. He owes a lot. In terms of how much creditors may receive, even if we do have a lot of money, I don’t know how far it will go. He owes many millions of dollars.”

The Wilton Companies, founded by Hank Wilton’s father, E. Carlton Wilton, is not involved in the bankruptcy.

Hank Wilton remains a member of the Wilton Companies board. That seat will be relinquished once his shares are sold. The remaining board members are Poole, Johnson and Bryan Kornblau and Sam Kornblau.

Reached by phone this week, Hank Wilton said the bankruptcy has been a long, arduous process.

“It’s been two and a quarter years already. It gets to a point where ? because you really can’t do anything ? you’re sitting around waiting for everything to finish out,” he said.

“It takes quite a bite out of your life. My recommendation to anybody is not to go through this.”

Wilton said he’s picking up jobs here and there to manage some real estate developments, mostly for other parties. He now runs new firms, Wilton Acquisitions and Wilton Investments.

“I’m working, but I’m not making any money at it. It’s a very painful experience,” he said.

“This thing has been quite long. It’s a process that the court controls. From our point of view, we’re just trying to be supportive and helpful where we can,” Johnson said.

Phillips, the trustee, has hired Tyler Brown and Eric Flynn, attorneys from Hunton & Williams, to represent him in the case and manage the stalking horse process.

A hearing will be held Nov. 7 to consider the proposal and potentially approve Mountain Investments as the stalking horse. The shares will be offered as a package deal.

Hank Wilton’s bankruptcy will likely wind to a close once the shares are sold off. But there are still a few loose ends, Phillips said.

“Mr. Wilton had a number of different entities, and we’re still in the process of sorting out what, if any, have any value to us,” he said.