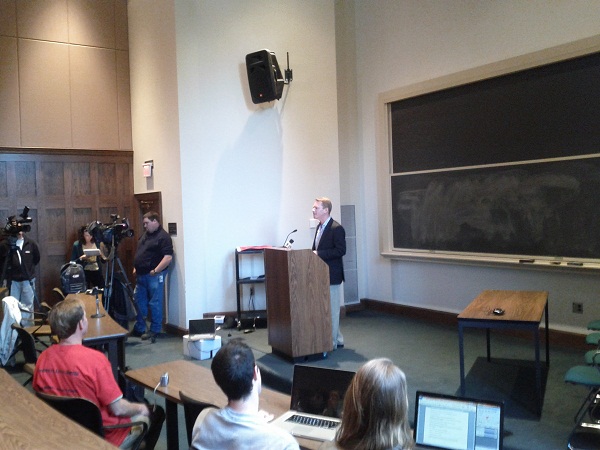 Supporters of the University of Richmond’s recently canceled men’s soccer and track teams aren’t going down without a fight.

More than a month since the school announced it had cut men’s track and soccer in favor of a division I lacrosse program, the soccer alumni have banded together to try and force the school to reconsider its decision and reinstate the canceled programs.

On Friday,  1991 alumnus Scott Byrnes took to the microphone at a press conference and outlined a series of ways in which he and his group believes the school acted dishonestly.

Some of those accusations can be found in a recent Washington Post article published last week. Look to BizSense later this week for coverage of the group’s effort to get the sports reinstated.

University of Richmond likes to claim it is committed to diversity on its campus. This move clearly indicates otherwise and is President Ayers’ and this Board’s equivalent of former President Cooper’s “Mush in – Must out” – The demographic of the LAX Bros will garner the school more money down the road… I am ashamed at how my University has prostituted itself. There are solutions to add Lacrosse while keeping all teams in place. For a school with an endowment that starts with a “B,” this is ridiculous.

I wholeheartedly agree with Kim Kacani. I am a class of 1982 alum who has lived in the Richmond area for the better part of the past 30 years. I applaud the University for its efforts over the past decade to tirelessly promote domestic and international diversity in an effort to ween itself from being so dependent on the northeast corridor for its students. In April of this year the University announced to all that it was committed to soccer and six months later backtracks on its commitment. The University speaks with forked tongue…..saying one thing and doing another. The… Read more »