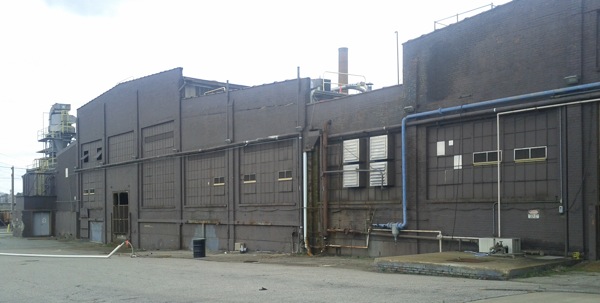 A building at the former Reynolds Metals plant. (Photo by David Larter)

Tom Wilkinson of Franklin Development Group has spent the past year trying to close on the 17-acre former Reynolds Metals plant in Manchester but lost the contract Friday.

“It’s been very challenging,” Wilkinson said. “I’m still trying to buy it. We’ve got some great plans so now I’m trying to get it back under contract.”

Wilkinson said that he was exploring another financing option but that nothing was certain. The Richmond office of CBRE is shopping the parcel around.

BizSense reported in March that Wilkinson put the property under contract and was planning a large mixed-use project with office, retail and apartments in some of the old office buildings as a possible tax credit deal. CBRE was reportedly shopping the property for about $9 million, according to several sources close to the deal.

The land is owned by New Zealand-based Reynolds Group Holdings.

Under Wilkinson’s vision, Lingerfelt Companies planned to develop an office component. Ryan Lingerfelt said that his company is still interested in office on the parcel but is not interested in buying the whole property.

“We just don’t do historic tax credit deals, and that’s what’s really going to kick this thing off,” Lingerfelt said. “We’re not looking at buying it.”

The property includes three buildings – about 210,000 square feet – that might qualify for historic tax credits.

Several other big developers looked at the property.

“When it came on the market, we did what we had to do and checked it out,” he said. “It’s not something we’re going to pursue, but that’s not say it’s not a great piece of property. I’ll be interested to see what happens with it.”