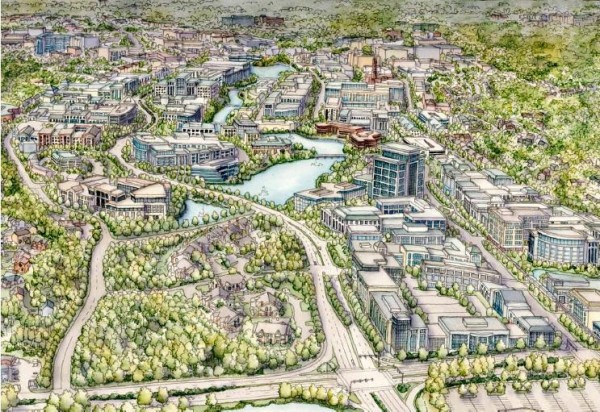 A rendering of Highwoods Properties’ plan for Innsbrook.

Highwoods Properties, the largest property owner at Innsbrook, has ambitious plans for its share of the almost 30-year-old suburban development. And Paul Kreckman is the man leading the charge.

As head of Highwood Properties’ Richmond operations, Kreckman, 63, is overseeing the planned $2 billion transformation of 200 acres of the 1,300-acre park.

Highwoods wants to redevelop 40 acres into a mixed-use downtown concept that would include 415,000 square feet of retail, 1,000 hotel rooms, 6,000 apartment and condo units, and 3.5 million square feet of office space.

The development, near the corner of Cox and Nuckols roads, would take place over 20 years at an estimated cost of $2.4 billion.

Although the plan is in its early stages, it has attracted the attention of Innsbrook residents.

Kreckman, who has a bachelor’s from Syracuse University and a master’s from the University of Virginia, both in economics, sat down with BizSense recently to discuss his plans and how Highwoods will foot the bill. Below is an edited transcript.

Richmond BizSense: You have clearance from Henrico County’s planning commission for your plans at Innsbrook. Does that mean you can start moving ahead?

Paul Kreckman: No, not yet. We’ve got the Board of Supervisors on Dec. 11, and that basically will give us approval for the broader, overall concept of what we want to do — zoning approval.

Then we have to do a master plan for the site. It’s one thing to do schematics of where the roads will go. After it’s approved, we have to go in and do the work. So we’ll have to submit a plan of development, and that will be opened for another public comment. That will typically be a hearing at the planning commission with public and planning staff inputs.

There is always a next step, but that’s the life of a developer.

RBS: Why do you think this transformation will attract more companies to the area?

PK: We are seeing a generational shift. When companies look at relocating, they are looking for a place that’s attractive and has an emphasis on more social spaces. As a provider of real estate space, we want to provide the kind of places that would weld those together.

RBS: What does the plan for the first 40 acres entail, in an ideal world?

PK: About 585,000 square feet of office, another 40,000 square feet of retail, which should be mostly neighborhood retail like groceries and restaurants, 200 hotel rooms and 1,230 residential units. The request is that we’ll be doing 100 percent apartments, but in all likelihood it will end up being a mix of condos and apartments as the market comes back.

RBS: So you’re going to use rental incomes to pay for the parking structures?

PK: Highwoods doesn’t do residential. We are talking with some very good apartment developers, and as part of their development costs, they’ll be helping to pay for the parking. We’ve selected an apartment developer, but we’re not ready to announce that.

RBS: When I hear what you are planning out in Innsbrook, I think about Silver Spring, Md., or some of the other D.C. suburbs where this model has been successful. Part of what makes it work up there is a huge defense industry and government consulting industry. Can you expect this to work in Richmond without that kind of a base?

PK: Richmond has never been an economy that is susceptible to a big crash. One of the reasons we’ve been able to survive and thrive is we have a diversified economy. One industry might lose jobs, but another will add jobs. If you think about it this way, we’re not the hare. We’re more the tortoise.

But the key is we have to grow, because if we don’t we’re going to stagnate. We have to think about what we want it to look like, and I think there is a better vision. That’s what we’re trying to provide. We want to arm our economic development people with another kind of product to go out and pitch to prospects.

RBS: Is infrastructure going to be a challenge when it comes to redeveloping Innsbrook?

PK: When Innsbrook Corporation originally developed the office park, it had these great big tracts of land it could sell off to recoup the cost of roads, utilities, etc. The problem with redeveloping a small 40-acre plot – I say small in comparison to 800-plus acres – is that you don’t have those big tracts of land to sell, so you have to increase density to be able to afford it.

RBS: Are you worried that a dense 40-acre tract will look a little out of place in Innsbrook?

PK: It’s located in a part of the park where we can do it. That’s part of the challenge we face, but that’s why we are going to do it well. It won’t help my property values if it isn’t [done well].

RBS: How does Highwoods plan to pay for all this development?

PK: At this point, we are basically self-financed. We have our own capital and lines of credit to use for these projects.

Before I joined Highwoods in 1995, I was a private developer. I came from that world, talking to banks and securing capital investors. But now, really all they ask of me is that I present wise investment decisions.

But we also know that our apartment developers are still in that world, and the talks we’ve had with them and with the banks have been very productive so far.

Highwoods is not thinking about the residents near by. Paul Kreckman needs to consider the residents opinion and work with them and secure a happy medium. Would he like a 250′ foot building behind his house?

I have lived and worked in Innsbrook for 10 years and I welcome the idea of making Innsbrook more urban. I would to like see more walking paths and easier ways to cross Nuckols and Cox when on foot. Innsbrook needs to become more pedestrian friendly. We need more lighting on the walking paths as well.

For most (if not all) people who work in Innsbrook, going to lunch means getting into your car. I like the addition of 40,000 sq ft of retail space but would also like to see more retail spread throughout Innsbrook.

I certainly hope they address the traffic issues before they start planning to build more business and residential areas. Have you ever tried to get out of Innsbrook at rush hour? Try doubling your time at the stop light or just trying to cross Cox Road to get out of a parking lot…what are they thinking?