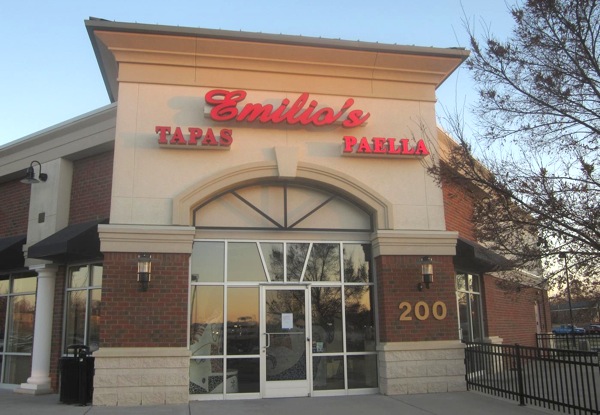 Above, the Emilio’s location at Towne Center West. Below, the eviction notice. (Photos by David Larter)

A local restaurant with three locations has been evicted from its Short Pump store.

Emilio’s Tapas y Paella this week was locked out of its Towne Center West location after three years in business there. 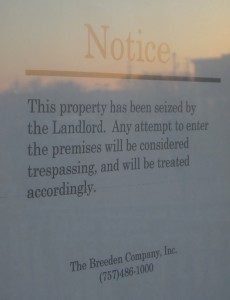 A note on the door said the restaurant had been seized by its landlord, the Breeden Company. Emilio’s owner, Emilio Peiro, could not be reached for comment by press time.

The restaurant has two remaining locations at 1847 W. Broad St. and at Woodlake Commons in Midlothian. It opened in Towne Center West near the Short Pump Hilton in July 2009.

A post on the restaurant’s Facebook page last week urged customers to come eat at the now-shuttered location.

“PLEASE support ALL of Richmond’s small businesses today,” the post read. “It’s harder than you can imagine competing with the big chains and corporations. We really need some hometown love!! Emilio’s Tapas y Paella in Short Pump is OPEN FOR LUNCH 11am-3pm. Happy Hour 4pm-7pm. Emilio will be working ALL DAY LONG.”

A call to Torrey Breeden, executive vice president at the Breeden Company, was not returned by press time.

Emilio’s is the second restaurant to close at the shopping center in the past 18 months.

Unfortunately, that’s not an area that supports local much. Sorry to hear they tanked, but that’s a dead-zone for anything that’s not a national chain …

@Casey- it’s not so much the Short Pump area as a whole- plenty of locals are thriving amongst the chains. That shopping center in particular, however, has struggled to keep anyone. Bad location, no frontage towards Short Pump, lots of vacancies.

Tough to watch a great restaurant like this one having trouble with their P&L.

I have to agree – this concept seems better suited to the city, I think short pump is for chains too

I agree with Trevor, although there are a lot of chains in Short Pump there is a good amount of local options as well. Emilios just isn’t good enough to have that many locations though. Just concentrate on making one really great. He probably would have been more successful putting money into the one downtown. The inside is ok, but there is no curb appeal, it’s hideous. Imagine how beautiful it could have looked if the money had been spent there.

In this economy it is tough to survive anywhere and my personal motto is to be Great at one thing, not just good at many. The big chains lack fantastic customer service and have the financial ability to flood the market, thereby, pushing the little guys to the curb. What is really lost is Quality, uniqueness and the honor to service the community who work hard and deserve the absolute best!! We here at THE OLIVE OIL TAPROOM wish only the best for our local businesses, Emilio’s and Breeden. We all are trying to make a living with something we… Read more »

Pay your rent and you can stay. There’s no mystery here.

A constantly rotating staff who often didn’t know what they were serving is the real reason for this place’s demise. A great menu, good food, just poorly run up front. I like going to a place with a dependable bartender, as opposed to ‘bartender of the month’ rotating staff.

The other location isn’t any better.

I know it’s not easy to run a restaurant, but consistent staff that you can depend on is a nut that Emilio has yet to successfully crack.

Successful restaurants do have the skill, ability, desire, and commitment to their employees.

I found the food and service beyond poor. I make an effort to support local biz in the Short Pump area. But I won’t spend my money on a poor experience just because it’s a local biz.

Hope and change people..This is just another in a long list that will be forced to close under Obama and his policies..Healthcare alone is putting enormous financial pressure on all businesses big and small..Soon SP Town Center will look like a ghost town..This is what you fools voted for so this is what you get..Enjoy the next for years

Mac – Many, many thanks for ruining the previous seriousness of this discussion and wasting the time of everyone with your uninformed, partisan babbling…I especially liked your unique “analysis” which seem to be based on nothing but your own hallucinations…

Hey Mac….Obama caused this? Please put down the pipe and drink a large glass of the Kool-Aid!

The only thing to HOPE for was a CHANGE in staff. Plenty of local businesses have opened and thrived recently. When the tide goes out.. you find out who’s not wearing their bathing suit.

It’d be nice to think the tide would start to come back, but it doesn’t look that way.

@mac: I fail to see how Obama had anything to do with this operation closing. Surely you are mistaken. You mean to tell me no other operation closed before Obama….get a life son.

That place was mediocre at best. I also feel as if that area is dominated by chains. I do however spend waaaaaaay more than I should every time I go into the “OliveOIl Taproom”. If you enjoy cooking and have not yet gone in there, you are doing your tastebuds a disservice! Go take the free sampling and taste for your self. Flavored olive oils and balsamic vinegars. All authentic and fresh. Incredible stuff!

Most local restaurants close due to quality. I don’t know anyone who is not willing to pay for a decent meal especially in a small business. You have to have a good menu, quality food and above average employee’s. I think this place moved way too fast to open more places before they had perfected the original. There is a restaurant that is near where we live that is locally owned and is similar in price to Panera’s. The food does not even compare in the least to Panera’s. I do not even know how this place is actually still… Read more »

Couldn’t agree more. I tried the Woodlake location when it opened and was never so upset about a meal. It was the worst Paella I ever had and the owner kept telling me how he won some huge award in Spain for it.

The poor economy has nothing to do with these failures… poor food does.

I currently work at the Wingate – Short Pump hotel and am in the Sales Department. It’s sad to see Emilio’s go! I’m not terribly sure they had the right models and ideas for Short Pump. I have a quick back story that helps support my reasons. Lately (past 6 months) in Short Pump restaurants (2) have been dropping by the hotel and speaking with our front desk associates and offering them incentive programs for referrals. It’s a great idea on a number of fronts – restaurants want patrons -> hotels have out of town guests who need to eat… Read more »

Employees or Guests? Did they offer an incentive program?

Point being they weren’t functioning on all cylinders if they didn’t adopt a program for a location (hotels) where most people (guests) need to eat out!

As the manager at Kabab Grille, another restaurant that closed in the same plaza, I can tell you that the incredibly low traffic and high rent of that plaza is what is forcing the restaurants to go out of business. Breedon charges inflated Short Pump premium for a plaza that gets NO exposure from the road. Kabab Grille thrived for five years in Chesterfield before taking the gamble of coming to Short Pump. It’s not always the restaurant’s fault if the location is bad and the leasing company is unwilling to work with its tenants!

Couldn’t disagree more. The landlords don’t have to work with the owners… that’s what lease negotiation is for. It’s the businesses’ responsibility to be able to live up to the contract they all signed. You also can’t blame low traffic for the problem because it’s one of the busiest parts of the Greater Richmond Area. If a business fails in that location it’s 100% due to poor planning, low quality food and/or service, or unwillingness to adapt. Also, you cannot compare a business that thrives in Chesterfield to one that fails in Short Pump considering the palates of people differ.… Read more »

BS, Ike. There are NO good restaurants in Short Pump. It’s the epitome of corporate blandness. Emilio was paying $6 grand a month. That’s tough to make month after month. Breeden absolutely is pricing good food out–only overpriced bland/sugary garbage like Honey Ham can exist there. They will learn when they have to drop price. BTW, my family has owned restaurants for over 100 years…

Josh I’m not sure what you are arguing? Are you arguing the fact that signing a $6,000/mo lease was a bad idea? I’m agreeing with you that Short Pump has no good restaurants so I’m not sure what that argument could be. Frankly I’m just confused… Emilio’s sucked, as does all the other food in that area. I’m just simply saying you can’t blame a landlord for evicting a tenant that fails to pay. My comment about the Chesterfield thing was that what does well in Chesterfield doesn’t necessarily translate to Short Pump because of different palates. PS… my family… Read more »

NO good restaurants? I’ve heard great things from non-Short Pump (Hanover and Richmond) folks about Iron Fish. I also agree that the foot and drive by traffic is very low in that area, with the exception of the apartment complex located behind and the two hotels. I know the Wingate – Short Pump has 102 rooms, which is nearly full every night & the Hilton – Short Pump also has a larger amount of rooms + tons of conferences. It doesn’t take a genius to find out that could be your target audience. I also don’t live in Short Pump… Read more »

Sad to see Emilio’s not make it, but the truth has been said a few times already. Short pump does not support independent restaurants. The people that live in the area go to chain restaurants and show no local loyalty. The location also stinks, so they were fighting that battle too, hope they have continued success @ their other locations 🙂

Breeden also owns the Woodlake location, I wonder what the rent is there ?

So wait, Peter Chang’s is not a good restaurant? I wonder about all those awards, both local and national that it won. I liked the Osteria, at least, their pizza was very good , certainly for Short Pump. But getting friends to go there was a chore because they didn’t really understand where it was. There is very little traffic flow past those shops. Patina Grill was one of my favorites in the area for years; though I haven’t eaten there since the ownership change, I would think it also counts as a locally owned, non chain place, and is… Read more »