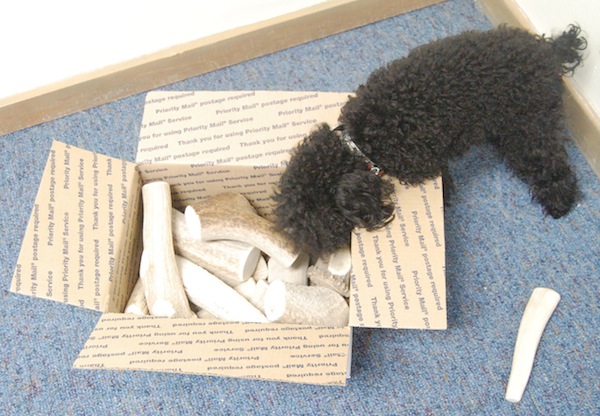 Not many startups require 1,000 pounds of elk, moose and deer antlers.

But when Karl Hindle and Ashley Darnell launched Blue Ridge Dog Chews about a month ago, that’s exactly what they needed. Hindle saws and sands the antlers down to the size of a chew toy, and the pair sells them to dog owners across the country.

“I don’t have a thousand pounds of antlers sitting in my garage,” Hindle said. “We’re getting them in shipments from the supplier. But it was a big commitment.” 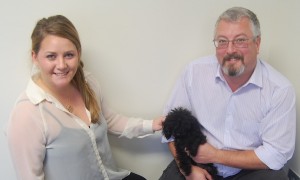 No woodland critters were harmed in the making of Blue Ridge Dog Chews. The animals shed their antlers naturally, and Hindle said a supplier in Illinois collects them from reservations and ships them to the Midlothian-based startup.

Antlers are already a common addition to furniture, and Hindle said their sturdiness and shape make them a good fit for canine treats.

“It’s a calcium-rich product that won’t splinter or shatter,” Hindle said. “They’re completely natural, so there’s nothing on this that’s going to make a dog sick.”

Blue Ridge Dog Chews made its first sale to a customer in Michigan about two weeks through eBay. Hindle said they’ve used the online auction site to feel out the market, and they like what they’ve seen.

The company has about $2,500 worth of sales pending and plans to launch a website this week. A large chew toy will run about $12, and a few customers have placed bulk orders. Eventually, Hindle said he expects the majority of the company’s sales will come from retail.

“We’re still very much in the early stages,” Hindle said. “We don’t have a single retail account booked, but we expect that will change by Christmas.”

Hindle and Darnell have compiled a list of specialty pet retailers, and getting the treats into local shops is a top priority. For now, Hindle said he’s focusing on the Richmond market.

“I’d rather have a strong local company than a weak regional one,” he said.

Blue Ridge will have some direct competition from local and national companies. Petco and Best Bully Sticks, a local dog chew company that earned a spot on the Inc. 500 this year, both sell a limited supply of antler chews.

But Hindle says specializing will work in his favor.

“We’re not trying to be all things to all people,” Hindle said. “We’re focusing on one product and doing it well. We’re also trying to build personal relationships with all of our clients.”

Hindle and Darnell work at Anderson Internet Marketing, an online branding agency that launched in July.

“It might seem sort of counterintuitive that two people from an internet marketing company are relying so heavily on old-school business methods,” Hindle said. “But that’s what works, and that’s what’s going to separate us from the competition.”

Filo, Hindle’s teacup poodle, provided the inspiration for the company. Hindle’s stepson is an avid outdoorsman, and Filo responded to a pair of discarded antlers he left on the floor after a hunting trip.

“This little teacup poodle just starting chewing on this huge antler with the wrath of God,” Hindle said. “It was the funniest thing.”

Not sure how to buy on their site…if you really want the best elk antlers available, try http://www.bestelkantlers.com, great site, fast shipping, and a never ending supply of elk antlers. Give them a try, they are Richmond based as well!

You don’t buy off our site – you pick up the phone and speak to a real live person who cares about you and your dog, or come in and see us.

And we only supply American!

Wow, really poor form for another company to try and advertise on this write up. First of all, the site owners should delete this spam, and anyone with any sense of decency should refuse to buy from people who behave in such a way. And then you act like it’s not the company but a customer testimonial?? Dishonest.

Extremely poor form “Best Elk Antlers”… I will never order from you, and anyone who mentions your brand is going to get an earful.

Ahahhaha advertising your product on a positive write up about another product? That’s low…

We finally got it launched – you can now buy directly from our website at http://www.BlueRidgeDogChews.com – thank you for all your support 🙂