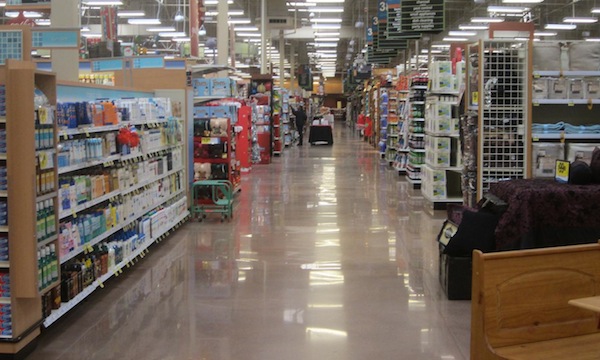 Inside the new 123,000-square-foot Kroger Marketplace . (Photos by David Larter)

In addition to launching a 123,000-square-foot Kroger Marketplace in the old Cloverleaf Mall at Midlothian Turnpike and Chippenham Parkway, the grocery chain is working on its next local store. 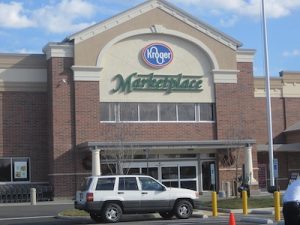 Kroger has invested $151 million in the region, remodeling several stores, including at Carytown and Willow Lawn, and building stores at Short Pump and the former Cloverleaf site, now known as Stonebridge. Cummins said that the Midlothian store is “the culmination of that effort” and that the company is entering a new phase in its plans for the Richmond area.

“We want to open two stores a year until the company stops giving us the capital,” Cummins said.

The new Henrico store will cost the company between $20 million and $23 million, and construction should be underway by the middle of next year. It will be the same size as the Midlothian store and should be open in 2014.

The store will be the anchor of a new shopping center called Staples Mill Marketplace, which Marchetti Properties is developing. Marchetti also developed the Target-anchored shopping center across the street and the Shops at Stonehenge, also off Midlothian Turnpike.

According to a flyer on the Cushman & Wakefield | Thalhimer website, the shopping center will be almost 300,000 square feet, including five outparcels and 25,000 square feet of retail for lease.

Kroger’s “Marketplace” stores feature 30,000 square feet of non-grocery goods, such as chairs, bedding, kitchen supplies and furniture. Kroger spokesperson Carl York said the prices are set to compete with chains such as HomeGoods.

The Midlothian store, which will have about 300 employees, is part of the Stonebridge development, spearheaded by shopping center developer Crosland Southeast. The firm’s website advertises the development as a two-phase, 400,000-square-foot complex with almost 200,000 square feet of additional retail and 350 apartments. Atlanta-based Collins and Arnold is the general contractor for the new store.

Cummins said Kroger is bullish on the Richmond area.

“This region has always given us some of our best return on investment,” he said.

According to the latest market share reports in the grocery trade publication Food World, Kroger had a slight year-over-year rise in market share in Richmond last year but still hangs around 12 percent.

This is really exciting news for the inner suburbs of Chesterfield. After years and years of watching retail move further west and north, it’s great to see our area of the county undergo some revitalization. Hoping some high quality cheap eats like Chipotle, Panera, etc, sense an opportunity and build in this area in the near future.

They are building a Panera Bread across the street from Kroger beside BK music. Right beside that they are rebuilding the Jamaican restaraunt Corinas. They complelty tore it down to rebuild it and make it nicer on the inside and outside. I am the manager of the Wells Fargo right beside where they are building the Panera. I can’t wait.

This store has been all over the news for weeks. Is it supposed to be the mother of all grocery stores or something? Can someone explain to me why Richmond is so excited for a grocery store?

Ruben, this store is the biggest of its kind in the area. I am glad to see something positive done with the land that has been vacant for years. Those of us in the area have a history with the site for having frequented the old Cloverleaf Mall for so many years until it became deserted. We are happy for the store and look forward to the other stores that will be built on the land. I was there this morning for opening day and saw that the store is something to behold. It is one-stop shopping for everything. Customers… Read more »

I live 10 minutes from the store. Will check it out.

Ruben, there is not another grocery store in that area for miles. Some of us, myself included, are spoiled in some areas of town such as Midlothian, Carytown and the West End. This area is a food desert. There are some convenience stores and some latin grocers but not much else. Although I am not a fan of Kroger, and certainly not a fan of this Wal-Mart Kroger hybrid, I am at least glad the folks nearby have access to something more. Also, it will help be an anchor for the area to be redeveloped that has long been ignored.

I’ve been looking at the daily RTD promos, including a front cover wrap this morning. It’s an interesting concept, but I’m surprised the promotions haven’t given the public a better reason to trek over to the new store to check it out. Groceries + housewares in the same store? Hello? It’s called WalMart. (Or Target, or…) As and advertiser, I would have like to have seen more promotions around the grand opening to motivate people to visit…. giveaways, drawings, celebrity appearances, radio remotes, demos, sampling, exclusive products, heck, even Santa would have been something… They’ve spent a lot of money.… Read more »

John, you are absolutely correct. They didn’t promote those things you listed, but guess what? Almost everything you listed was there. I live within 5 minutes of the store, so I went this morning. Groceries were greatly reduced. For example, crab legs were were reduced to $4.99 a pound. At some stores they are much higher; about $9.99/pound. There were drawing and prizes, a mascot, and samplings galore throughout the store. There were salespeople walking around with trays of samples for customers to take such as red velvet cake, Pepsi, coffee, dips, cookies, etc.. I did not know this until… Read more »

Wonder how long it will take ’em to destroy that beautiful new store?

Who says racism is dead? You stay classy Bill.

Well, aren’t you a sleuth, Brett!

The Stockner Group is the landscape/irrigation contractor for the new Stonebridge Site. We are proud to be working on this exciting project and congratulate Kroger and developer CrossLand South on bringing this economic boost to Chesterfield County. We further would like to thank the work of The Timmons Group for the great job on the landscape planning of this project. Congratulations to all the companies who helped make yesterday’s grand opening a huge success!

I am sooooo excited at the prospect of the new Kroger coming to Staples Mill Rd. Can’t wait!!!

Hey if they are expanding Ashland or next to Bass Pro would be nice since they closed the one at Brook and Parham. We have to go all the way to 301 to shop.