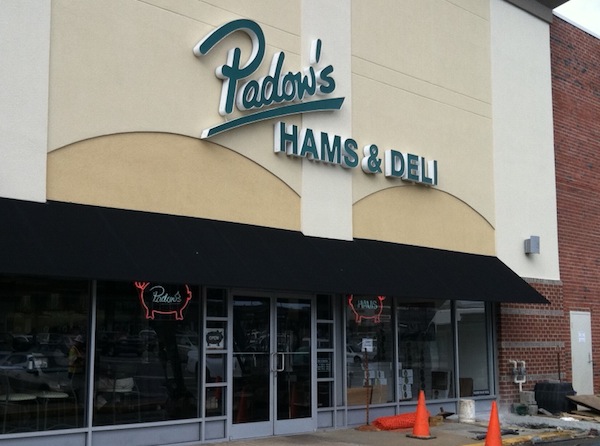 The Padow’s Hams and Deli at Willow Lawn. (Photo by Michael Schwartz)

To buy itself time after a dispute with a landlord, a longstanding Richmond sandwich shop has filed bankruptcy.

Padow’s Hams and Deli, which opened its first location in the Willow Lawn shopping center in 1988, filed for Chapter 11 bankruptcy protection in mid-November.

Padow’s president Sidney Padow said the company made the filing after falling behind on rent at the Willow Lawn location.

“It got to a point where we couldn’t afford the payments anymore,” Padow said. “We asked the landlord for some concessions, and we were basically told pay up or get out.” 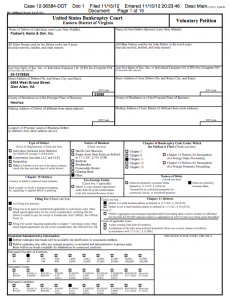 Federal Realty could not be reached for comment by press time.

Padow said the company hasn’t had any issues with its seven other Central Virginia locations. All eight locations will remain open during the bankruptcy process.

He said the dispute with Federal Realty dates back years. In 2010, the deli filed a lawsuit against Federal Realty for allegedly violating a provision of its lease agreement that prevented the landlord from leasing space to what Padow’s considers competitors: in this case, Five Guys and Qdoba restaurants. The suit was settled out of court.

Padow said rent for the Willow Lawn space is more than $9,000 per month, accounting for about 25 percent of the store’s monthly sales. On top of late fees and other penalties, Padow said it’s almost impossible for the deli to keep up with payments.

“We’re working hard, trying to keep our prices low,” Padow said. “That store used to be slamming, but sales aren’t what they used to be. It’s the same story for a lot of people in the restaurant industry.”

In its filing, the deli lists $339,000 in assets and $1.42 million in liabilities, with more than 50 creditors. A sister company, Padow’s Deli Inc., simultaneously filed for Chapter 11. That entity has only a few hundred dollars in assets, and the company has asked the court to combine to the two filings.

Padow said he hasn’t had problems with any of the company’s other creditors, which include Sledd Properties/Thahimers (its landlord at the West Broad Street location), Capital One and the Virginia Department of Taxation.

Paula Beran, with the firm Tavenner and Beran, is representing Padow’s.

Although Padow expects a rush around the holidays, he said overall sales at the chain have dropped about 25 percent since 2008.

Two of the eight locations around Richmond – at Willow Lawn and at West Broad Street and Gaskins Road – are corporate owned by Padow’s. The other stores are franchises, a model it adopted in the mid-1990s.

The Padow family broke into the Richmond food business in 1936, when Sidney Padow’s father, George, opened a grocery store in Jackson Ward and made a reputation for quality hams.

Today, Sidney Padow runs the company with his brother, Eddie.

I’ve been a long-time lover and patron of Padows, but their quality went way down in recent years. They could not compete with better places. I took a friend who’d just moved to Richmond there and was embarassed as she opened her sandwich to two little measley slices of meat. This isn’t market dynamics, but getting lazy about keeping competitive.

Used to go to Padow’s downtown and Gaskins all the time but over $10 for chips, a drink, and a club sandwich with less meat than a Subway sub, the thinnest wheat bread on the planet just isn’t a good value compared to what’s out there now. And since they added Celebrity Room pizza at Gaskins, you can’t go in to the counter an order a sandwich for dinner and eat it there without having to tip someone to bring it to your table.

Fortunately Padows will remain open but It seems we read daily of the demise of established businesses due to landlords unwillingness to renegotiate long term leases signed when the economy was booming and rents were at a premium. With that stance of pay up or get out one would think these landlords have budinesses clamoring for space yet look at all the vacant spaces at shopping centers and its clear the economy is still in a slump. Lowered rent might make the difference between closing the doors and dumping more onto unemployment rolls and businesses being able to continue until… Read more »

Big fan of Padow’s. We eat there about once a week and Sidney and Eddie have always taken care of us. Bought our Thanksgiving hams and turkeys there. They were excellent. Hang tough guys!

I tried it once upon moving to Richmond. Felt I paid a lot for not much, and haven’t had the urge to go back. I think that’s a big part of their problems…

A lot of the restaurants closing around Richmond, like bills for example, seem to be making the economy the excuse, and ignoring the elephant in the room – selling bad value product is no way to stay in business

Padow’s has been a long time business in Richmond when it started in the 1930’s with the grocery store in Oregon Hill. They have always provided quality products and good customer service. Sidney and Eddie Padow have put their heart and soul into the business. Unfortunately, the economy have a negative effect on businesses especially the locally owned businesses. Landlords rather have vacant space instead of renegoiating a long term lease with a long term tenant.

It didn’t help that Willow Lawn keeps reinventing itself. They tore the whole place up in 2006 which made it a construction zone for 1 year, then did it again last year. I frequent Willow Lawn a lot but it doesn’t take a genius to see how detouring to business the last 2 renovations were. Willow Lawn is better for it, it’s a shame the landlord can’t work out a deal to help a long standing tenant who stuck with them while the shopping center was tearing itself up to ensure it’s future while jeopardizing it’s tenants. All the while… Read more »

Sidney, Eddie and Padows are Richmond legends and I am hopeful that after the reorganization they can return to sound footing..
I enjoy their convenience and have always received a fair meal @ a fair price..

way way to much rent for a store such as that,no wonder so much vacant property

My experience with Padows at the Brandermill location in recent (last month) visits has been similar to what others reported here–high prices for small sandwiches that had very little ham. Padows is an ol’ Richmond tradition, but with Ukrops gone, about the only “ol’ Richmond brand” in retailing that earns its keep these days is Pleasants Hardware.

I feel sorry for the franchisees who are having the franchise name sullied. The general public will say over and over and over “I thought you were going out of business.” Franchisees could use this as an excuse to try to get out of royalties ala “you trashed the good name.”

Padows… too much $ for too little value

Seems their Willow Lawn landlord had a similar business model.

I expect the same results.

Great article- very informative. Though I will say it seems likely there is more to blame than just the dispute with the landlord. A chain with multiple locations would theoretically be able to cover the higher rent at one single location if it had sufficient liquid assets. Unfortunately it sounds like they have had problems compounding for awhile given the 50 creditors and a history of missed payment deadlines. A sad situation for a great sandwich joint.