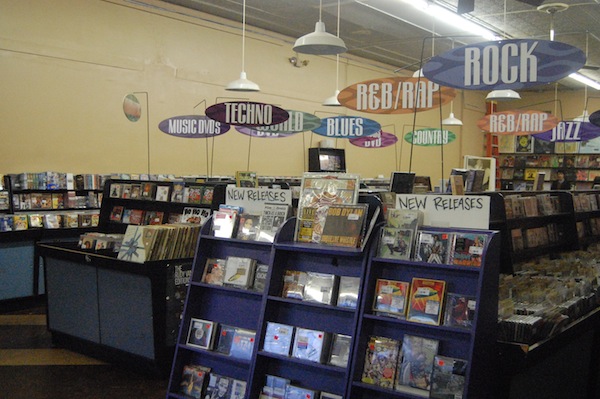 An iconic Carytown music store is downsized but not out.

Plan 9 Music last week moved into a 3,300-square-foot space at 3017 W. Cary St. Its new smaller shop is across the street from Plan 9’s previous location, where Richmonders bought new and used CDs and records for more than a decade.

The move is part of owner Jim Bland’s plan to cut operating costs after the business filed for bankruptcy protection in October 2011 to reorganize its debts.

Bland is still working with the landlord for long term rental of the smaller space, previously occupied by Pirouzan Oriental Rugs, but might have to move again if the price isn’t right.

Bland opened the first Plan 9 in 1981, a few blocks away from where the store is today, and long before the Internet would pose a threat to shops like his. By the early 2000s, he owned 10 independent music stores from Roanoke to the Carolinas.

BizSense caught up with Bland, 61, to talk about the move and how the store competes with online downloads. Below is an edited transcript.

Richmond BizSense: What does it take to keep a music store in business today?

Jim Bland: It’s been a struggle. The leases and obligations got ahead of us. You think, ‘Okay, we’ve lost a percentage of sales, but maybe it’ll level out.’ But then it doesn’t level out, it goes down again. You just get in a bind, and that’s what got us in trouble. So you start losing stores, and you start losing personnel. That’s the toughest thing I’ve had to do, because some of those people had been with me 10, 15 years. One by one we had to peel them off, and everyone understood. But it just wasn’t a pleasant place to be. So that’s one thing: Just try to downsize as much as possible. 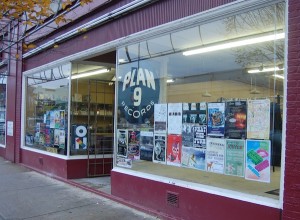 JB: Toward the middle part of January, maybe sooner. We’re getting some estimates on some things — what we can do as far as rent goes.

RBS: Can you talk about your history with Carytown?

JB: This is our fifth location in the area. In the middle, we were growing. Carytown was growing, more businesses were coming in. At the time we moved in there, there were only about half a dozen viable retailers. There was an antique shop, a coffee shop, Ellman’s [Dancewear]. We’re one of the few who had been there 31 years and are still there.

RBS: Why do you want to stay in that area?

JB: Part of it’s the fact we’ve been there forever. That’s been our known destination for years and years. So if we can find a way to afford it, we’ll stay. There’s still enough foot traffic. Right now we think we’re still enough of a destination — people can pull up and bring in their boxes of records and CDs.

RBS: What kind of response have you had to the new space?

JB: We had some regulars who were in there right away. People seem to like the space. I’ve had people say they’re really glad we’re still here. It’s a little cozier, but we were able to fit in all of the product we had at the old store.

RBS: Do you have a lot of regular, repeat customers?

JB: Oh, yeah. A guy was in there the day we opened. He’s from Virginia Beach but drove down for the opening. I recognized him as someone I’d seen around for years — turns out he used to come to the first location we had. We do have some customers who have been with us that long. We also have a lot of parents who used to bring their kids in, and now the kids are buyers.

RBS: Have you seen that customer base change over the years?

JB: Well, the biggest change over the last five years has just been the loss of so many customers. Over the years, we’ve had a lot of people who were at first reticent become more comfortable with buying online.

JB: The new vinyl. People are looking for cleaners and accessories. And there are still people who like to own music. When Napster first came out, people were saying music stores have five years left and they’ll be done. Well, here it is 15 years later. It was a much slower decline than was anticipated, because you’re talking about changing people’s habits.

RBS: You own a second location in Charlottesville. How’s that store doing?

JB: We’re hanging in there. That market is dominated by students, who are all well-versed in online music in every capacity. The thing is, we were geared to college-aged consumers. We knew their tastes because they were our tastes. But we’re back now to the regular customers who have been coming around for years. And there are just fewer of them. But we’re doing the best we can. We do sell a lot, all the time. We want to keep that. That gives us more of a presence.

RBS: What do you see five or 10 years down the road?

JB: Five years is about as far as I can look. But we have the bankruptcy plan ahead of us, so that gets phased in. I could certainly see being the last guy with a small shop, behind the counter looking at someone’s used records. Hopefully that won’t be the case. If I can keep shedding the operation costs that I have, we’ll be in a better place. And a better place would allow us to make debt payments. And make a reasonable enough livelihood for me and my core guys to make a living.

Happy that Plan 9 was able to move and for now at least remain viable. As someone who has spent a sizable chunk of their income there, it had gotten pretty depressing the last couple of years to see the old awning in such bad shape and the lack of recent releases being stocked. Hopefully the bankruptcy plans will given them a little more breathing room to afford to stock both new releases and some back catalogs.

Yes, keep the focus on vinyl. Please sell different needles and cartridges and players and receivers. Used good quality receiver and speaker exchange could be cool. I love vinyl, in this age of digital music, many still prefer the warmer sounds of vinyl. Also keep the Tshirt sales going!