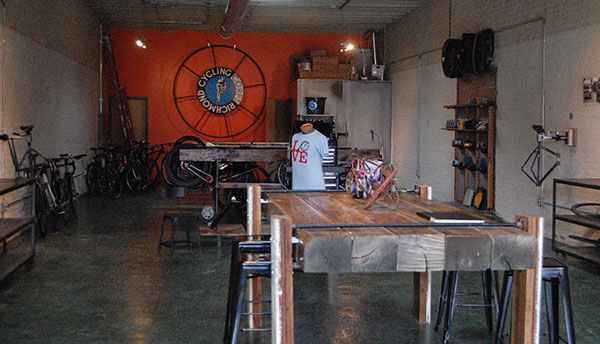 A local business dedicated to all things cycling just got bigger.

Richmond Cycling Corps this month expanded into a 2,000-square-foot space adjacent to the organization’s existing building in Scott’s Addition that was recently vacated by a local coffee shop.

Founder Craig Dodson said the extra square footage would give the nonprofit side of his business, which takes underprivileged young people on long-distance cycling trips, a distinct space.

Dodson also owns the Richmond Bicycle Studio, a for-profit bike shop used to fund the nonprofit. Before the expansion, both parts of the business operated out of the same warehouse at 1717 Summit Ave.

“We think the expansion is going the help people mentally separate the two parts of our business: the shop and the nonprofit,” Dodson said.

He started thinking of expanding when Lamplighter Roasting Company vacated the space in September. Lamplighter ran its Kickstand shop there until it moved a few doors down.

The new space is owned by local developer Scott Coleman, who co-owns the 3,300-square-foot cycling studio next door with Dodson. That property was formerly owned by imprisoned local developer Justin French. French donated use of the space to RCC in February 2010.

Dodson cut down on renovation expenses for the new space by accepting donated furniture and tackling most of the build-out himself. He said he spent about $3,500 on the expansion.

Since the bike studio opened last year, Dodson said he’s sold about 80 bikes that retail for between $5,000 and $6,000. He said that he puts the bulk of the revenue from the studio back into the nonprofit and that he hasn’t had to rely on grants or monetary donations.

About 50 students from a nearby public housing community have enrolled in the program since the organization launched in 2010.

“We try to use the bikes as a hook to get kids into our program,” Dodson said. “From there we just try to help out wherever we can, whether it’s bringing in college guides or driving someone to an ACT test.”

Thanks BizSense. A few notes: 1. 100% of the funding that Richmond Bicycle Studio generates goes towards supporting the outreach efforts of Richmond Cycling Corps– and therefore, Richmond Bicycle Studio is not a for-profit company– but rather our non-profit funding generator. 2. We still very much rely on monetary donations from supporters– so please keep donating to help us change the lives of youth in Richmond’s public housing projects.

Craig and Richmond Cycling Corps, So glad to hear things are going well. Keep up the great work you are doing. I know you have a huge impact on kid’s lives. It’s been a pleasure seeing your program grown over the years. The Bicycle Studio is an excellent idea.

Your Friends at Bike Virginia