When Marshall Morton arrived 23 years ago at Media General, profits in the newspaper industry seemingly knew no bounds and people still subscribed to morning and afternoon papers. 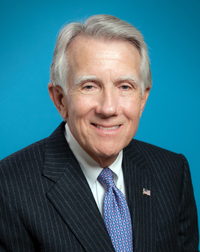 Morton, a Chicago native and University of Virginia graduate, came to the company as a number cruncher from the textiles industry and filled the role of CFO at a company that owned more than 100 newspapers, TV stations and a cable company.

In two weeks, Morton, 66, will retire as chief executive of a dramatically transformed company. In his seven years at the helm, he oversaw the publicly-traded company’s continued attempts to reconcile the Internet’s effects on newspapers and the recession’s effects on advertising while also managing Media General’s looming pile of corporate debt.

His swan song was a deal last summer to unload the company’s 63 newspapers, including the Richmond Times-Dispatch, in a $142 million deal with Warren Buffet’s Berkshire Hathaway. Morton announced his retirement weeks later.

BizSense caught up with Morton as he prepares for his last day in the top office to discuss what he’s learned over the years, why he didn’t retire two years ago and the relief he’s feeling.

Richmond BizSense: You retire in two weeks. What’s the first thing you’ll do?

Marshall Morton: The thing I’m looking forward to is having a little a less structure imposed on my calendar. It’ll be nice to take a long weekend to go visit friends without feeling I’m slowing things down for other people.

RBS: Why did you decide that now is the right time to exit?

MM: A piece of it is I’m 67. And I didn’t retire at 65 because we were in the middle of a recession. I wanted to feel I was leaving with everything settled. And now we have a tight focus in the digital world and the broadcast world. I feel comfortable in retiring now. There are good people here to follow me that know the company well.

RBS: As the outgoing head of a media company in the 24/7 news cycle, will it be difficult for you to unplug?

MM: I don’t think so. The people who handle the breaking news and make the news decisions, those folks are the ones who are plugged in. I can see where they would have a lot of trouble really letting go. I was always attempting to look to the next mountaintop and then decide what pathway would be the most productive one to get there. That kind of longer range thinking is really more contemplative. I was always one level removed from the mad rush.

RBS: The company you leave behind is profoundly different from when you took the helm. Did you foresee when you took over in 2005 that Media General would soon be newspaper-less?

MM: No. No one ever thought we would be newspaper-less. I came as a finance guy. It was to bring some financial discipline to decision making. Before, you hadn’t really needed that, because the media business was so profitable. My predecessor realized those days couldn’t last forever.

RBS: Is it a relief to be rid of the newspapers and only have to worry about running TV stations now?

MM: Yes, it is a relief. In the past, if we encountered two years of downturn in revenue, we’d have said, “It’s a cycle. It’ll turn around. It always has.” But I did worry about the newspapers. These were our long-term employees who worked hard in a business that had a lot of value in our community. But we just were not able to make any headway. They did induce concern on my part. We’re talking about real people here. So to find an owner like Warren Buffett or Berkshire Hathaway, it was the answer. I’m not going to call it too good to be true, but it was the answer we really didn’t allow ourselves to believe would happen.

RBS: Do you get a lot of people asking you if you’ve met Warren Buffett?

MM: I do. We’ve exchanged letters, but I have not met him.

RBS: So the deal was 63 newspapers for $142 million. When you decided to sell, what was how much did you think they could go for?

MM: We had gone out to test the market. In our pro formas, we were using a number very similar to the one we wound up with Buffett. So I was not terribly surprised. We had a pretty clear view of the future of newspapers. We got what we thought was a fair value.

RBS: You’ve said you were more of a numbers guy and learned the media side on the fly. How hard has it been to be the head of a media company in the digital age?

MM: I liked it. Any finance guy likes the challenge of dealing with shifting situations. It can be pretty boring, doing P&Ls and things like that. I found it very challenging.

RBS: We’ve spoken previously about how the world has changed for print media. What are your thoughts on how consumption of television is changing amid the rise of online/streaming video content such as Netflix, Hulu, TiVo and on-demand products?

MM: Right now it has not disrupted the revenue cycles. A lot of us are using DVRs to record things. That advertising is more and more artfully done, so even if you see it at fast speed, it’s still having impact. And advertising on the Internet is getting more and more effective. I think we have to make sure we understand how the user is changing and figure out how to get to the user on his terms.

RBS: What’s your proudest accomplishment in your career?

MM: You tend to think of accomplishments in terms of people you did them with. You probably get that answer from a lot of people. But I think the most recent one would be bringing the company into a tighter focus [broadcast, digital and no newspapers]. I’m proud that we bit this bullet, because it was a pretty big bullet to bite.

RBS: Do you have any regrets, or anything you wish you had done differently in your career, not just at Media General?

MM: I do not. I’m among the most fortunate people I know in that respect.

RBS: Any major plans for retirement?

MM: I enjoy tennis and have not been able to play a lot of it over the last 10 or 15 years. I probably need a lesson or two. And I enjoy woodworking of various kinds. So I’ll probably start fiddling around with that again.

I’ll still have an office here as a courtesy. I’ll come in and read the paper. And I’m still on the board as vice chairman. I would think at the start I’ll come in more often. I have some projects I’m interested in doing.