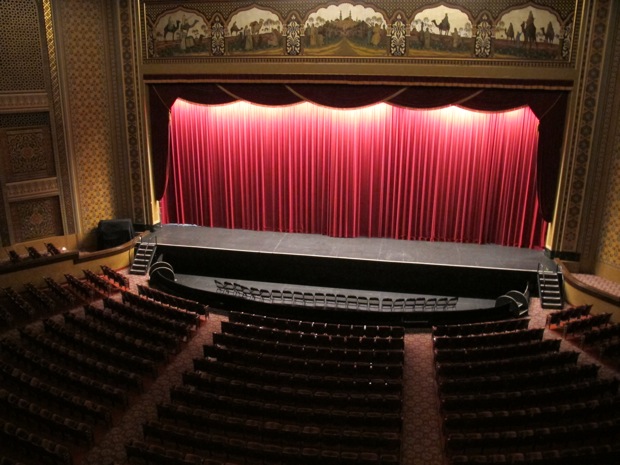 Dominion’s donation gives it the naming rights to the stage of the soon-to-be Altria Theater. (RBS)

The City of Richmond and CenterStage Foundation announced Thursday evening that the non-profit had secured a $2 million donation from Richmond-based utility giant Dominion Resources to help fund the continued renovation of the 85-year-old theater. 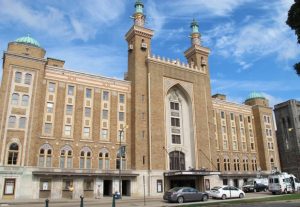 The Landmark Theater on North Laurel.

Mayor Dwight Jones and Dominion chief executive Tom Farrell showed up downtown at the Carpenter Theatre to announce the donation to the $50 million Landmark renovation project, which kicked off in July.

The announcement marks the second big donation toward work on the theater from Richmond’s corporate world. Altria donated $10 million to the project this summer to CenterStage, securing the naming rights to the building. The theater will be renamed the Altria Theatre in October.

Dominion’s money will give it naming rights to the theater’s stage.

“This is going to create millions of dollars in revenue for local business,” Jones said. “I’ve heard people when they come to the Landmark that they haven’t been to the city in years. These are people from places like Henrico and Chesterfield. It brings people into the city, and when they come here they spend money.”

The city, which owns the theater that sits on North Laurel Street in the heart of the VCU Monroe Park campus, allocated $14 million for the renovations.

At a news conference after Thursday’s announcement, which took place before a 7 p.m. performance of “The Nutcracker,” Farrell said that Richmond CenterStage still needs to raise $8 million to complete the Landmark’s renovations and establish a foundation for it.

CenterStage Foundation operates both the Landmark and the Carpenter theaters.

Farrell sits at the head of the Richmond Performing Arts Council, a wholly owned for-profit subsidiary of the CenterStage Foundation. RPAC is acting as the developer for the Landmark renovations.

The renovations are being funded, in part, by historic tax credits.

RPAC hired the Rhode Island-based firm Gilbane as general contractor. The architect on the project is the Massachusetts-based Wilson Butler Architects.

CarMax Presents: Broadway in Richmond’s “The Grinch!” at The Dominion Stage at Altria Theatre! Don’t forget your popcorn and drink at the Snag-A-Job Concessions stand. MeadWestVaco Restrooms are in the Owens&Minor Lobby. In case of emergency, there are four Genworth Financial emergency exits at each corner of the theater. Enjoy the show!

And if they didnt use cooperate money you would whine because too much tax payer money was used. What a joke you are.

Joe (and jd) where’s the Holiday Spirit? It’s just a light-hearted joke; calm down. I, for one, am GLAD to see our corporate citizens step up and give back to the community. I’m just amused at the branding aspect of it all. But since you asked, I would probably not “whine because too much tax payer money was used.” I’d much rather see tax payer money being used to make artistic, cultural, and educational investments for our city than the countless other ways that money could be spent. No need to get personal or call me “a joke” especially when… Read more »

Another good one! Couldn’t agree more.

A question for Mayor Jones: Why do you think the money is going to pour in from citizens of Chesterfield and Henrico to see shows at the Altria Theatre? Some will go to dinner before the show but that is no guarantee that they will eat in the city with its much higher meals tax. If the same citizens went to the Diamond to see the Flying Squirrels they would definitely be spending dollars for tickets, food,parking and merchandise, so it’s time for the city to step up to the plate and develop the plans for a new ball park… Read more »

Some people don’t have a sense of humor. I thought Jay’s comment was funny.

People who are worried about bringing people in from the burbs to make the city better, or richer, are living in the past. We don’t need them to be successful. I mean it doesn’t hurt, but it’s not necessary. We have thousands of people pouring into the city to work, eat, play and now LIVE. Also, screw baseball. It’s a waste of money. I don’t think you can say that there are 430,000 fans. That was total attendance for the year. A lot of people are counted more than once. We would be better off with something that could benefit… Read more »

They could call it the “DIAMONDSEUM”