Tom Yeager is no rookie: He’s been in the business of college sports since the late 1970s. But he’s never seen anything like what’s happening these days.

Yeager, 62, has been commissioner of the Richmond-based Colonial Athletic Association since 1985. That’s a rare mark of longevity in a time when college sports conference allegiances have gone out the door in pursuit of fortune and fame.

Headquartered on Parham Road, the CAA has taken some lumps as a result of the seemingly nonstop realignment, losing two schools whose men’s basketball programs helped put it on the map in recent years: The annual grudge match for CAA glory between Old Dominion University and Virginia Commonwealth University has lost most of its grudge thanks to ODU’s departure for Conference USA and VCU packing up for the Atlantic 10.

Yeager, a native of Allentown, Pa., and graduate of Springfield College in Massachusetts, is still trying to make sense of it all while making sure the CAA stays competitive.

BizSense caught up recently with Yeager, just weeks after the league announced it was moving its annual tournament from its longtime home at the Richmond Coliseum to Baltimore. Yeager discussed realignment, the loss of regional rivalries and whether schools like VCU will be better off for the moves they’ve made. Below is an edited transcript.

Tom Yeager: I’ve never seen anything like it. I’ve been in college athletics going on 38 years. There has never been a period like it. It’s really been kind of an earth change. Traditional teams and traditional rivalries are all going by the wayside.

RBS: What’s causing it? Is it purely money?

TY: Some of them were money. But I think equal if not greater value is the ego that’s involved. Ego of the institution. Ego of the boards and donors. You have now worldwide, widespread media. People used to travel by train and take two days to go to games. The funding has increased so much. Now teams travel by charter. There are no real regional borders in anything we do.

It’s all about positioning and rebranding. It’s like having an address in the right neighborhood. People are drawing on the perception of “I’m in the Big 10. I’m in the SEC.” It’s a beauty contest in a lot of ways. It’s like you’ve left your spouse because someone winked at you. In this industry, we do keep score. And time will tell whether decisions for a lot of different schools worked out as planned.

RBS: How big is the money in the business of college sports now compared with when you came on the scene?

TY: Look at the larger athletic departments that have budgets in excess of $150 million a year. You have media contracts that start in the billions. It’s much more than it ever used to be.

RBS: How has cable TV and all the sports channels changed things?

TY: We’ll probably have almost 100 men’s and women’s basketball games on TV in a season. We’ve been fortunate to have a new contract with NBC Sports. But when we want to expand beyond that, that’s when the marketplace comes in. The standard cost to broadcast a basketball game is probably about $35,000 a game. Other leagues take it out of petty cash. They have these gazillion-dollar media contracts that cover all these sports. Heck, the Big 10 has its own network.

Then I have a group of coaches in another sport saying, “Why can’t we get our championship on TV?” On the women’s side, it’s a difficult sell. Our female athletes work every bit as hard as our guys and want to look for similar exposure. But it’s a marketplace-driven thing. 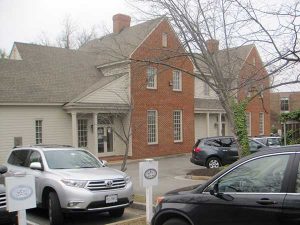 The CAA headquarters on Parham Road.

RBS: You mentioned how this eliminates regional rivalries. The loss of VCU and ODU playing in each other’s backyards twice a year comes to mind.

TY: The jury is going to be out for a while as to whether some of the basic fabric of what made college sports so popular continues to exist. College athletics thrives on emotion. Kids from Richmond high schools scattered all over the place, but they come home and see friends of other schools that they’ve played and say, “Hey, we beat you.” That starts to disappear when you have opponents that are more far flung. They don’t have as many attachments to the emotional side.

That’s not saying that new rivalries won’t develop and intensify.

RBS: The CAA obviously hasn’t been immune to this realignment craziness. How did the CAA get caught up in it?

TY: It started as somewhat of a trickle-down. As the conferences started to shift and people started to look at other options, that opened up the discussion. At the time, in the A-10 you had an opening with Temple University leaving. Conference USA, with ODU, had a number of schools that left and were going to join the Big East. The Big East lost people to the ACC. Georgia State [which is also leaving the CAA] had football aspirations and went to the Sun Belt Conference.

RBS: What can you do to keep the CAA competitive given the departures?

TY: It starts with brand identification. And what are the institutions’ core values and goals with the athletic program. Then you go out on a sales pitch. Sometimes it’s very well received; sometimes it’s not. It’s a constant: Be prepared, be proactive and reactive.

TY: We have since added College of Charleston and remain very active. When we looked at new markets for expansion, a lot of the alumni are in the Northeast corridor. That’s a place where a lot of our schools would like to have exposure. They can use the game as an opportunity to touch base where it helps student recruitment, alumni relations and donor bases that are there when our teams are in New York playing Hofstra, for example. People want to join this league. But it needs to be a nice fit.

RBS: With College of Charleston coming on, you’ll have 10 teams next year. What’s the right number given that some conferences have gone beyond 12 teams?

TY: For decades, leagues were eight and 10 schools. They were geographical. Now it seems like conferences with 12 seem to be the norm. We’re getting into 14-plus-team league alignments. That’s going to be a different scheduling idea. If you’re sitting at UVA, in the old days Duke and Carolina are in your building every year. Now that’s gone away. Who knows if that’s better or not? It’s more money. If that’s the ultimate goal, then it’s a good thing.

RBS: The CAA had a banner year in 2010-11 when ODU, George Mason and VCU all performed well at the NCAA tournament. Is that momentum for the conference gone now because two of the three strongest have left?

TY: In 2000, when University of Richmond and East Carolina University left, it was said that was the high-water mark and the CAA would never rebound. But we built back up. In 2006, Mason went to the Final Four. That was unheard of. The fact that this league produced two Final Four teams in six years out of what was supposed to be a nondescript league is reflective of the commitments our institutions made to hiring the right coaches and in investing the infrastructure.

I don’t think anybody is walking around here with a “woe is us” mentality. You go in the game with the expectation of winning, whether you’re a big underdog or not.

RBS: There’s always the chance that some CAA unknown can make a run and all of sudden the league is back in the discussion. Is that the beauty of the business?

TY: In 2006, when Mason made a run, are you kidding me? Did anybody predict that? Some great things can happen, and all of sudden it doesn’t matter what your pedigree is. If the ball goes in the hoop, you advance. If doesn’t, you pack up and go home. That starts the whole chatter over again.

All I know is that on March 11 some kid will be climbing a ladder at the Richmond Coliseum with a pair of scissors in his hand, cutting down the nets and going to the NCAA tournament. All this other stuff that’s going on doesn’t matter then. They’ve got a ticket to the dance. That’s the thing you can’t lose sight of.