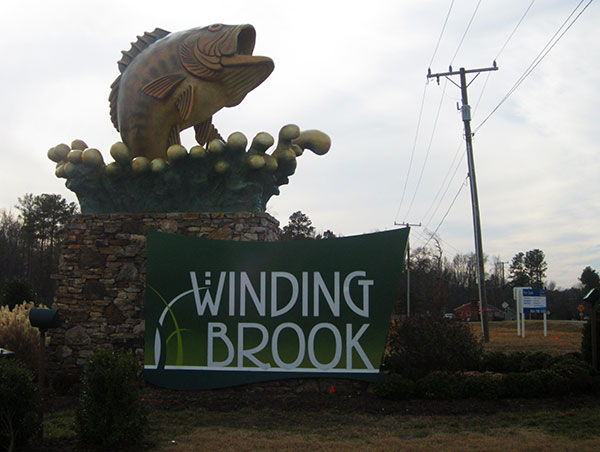 A 392,000-square-foot mall is planned near the Winding Brook development. (Photos by David Larter)

Outlet shopping in Richmond just got one step closer to reality.

A California-based developer this week purchased 43 acres near Bass Pro Shops and the Winding Brook development in Ashland, where it plans a 392,000-square-foot outlet mall.

Craig Realty Group bought the land at the northeast corner of the intersection of Lewistown Road and Lakeridge Parkway just off Interstate 95 from local developer Gibson Wright for an undisclosed price. 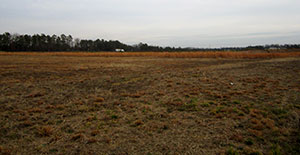 The site of the planned Outlets at Richmond.

Kay Pangraze, a development consultant and local representative for Craig Realty Group, said that the cost of the development would be “well over $50 million” but that it was too early in the process to know an exact figure.

Steve Craig, chief executive of Craig Realty Group, said his company is working on getting the project approved by Hanover County and pre-leasing. The development is to be called Outlets at Richmond.

Both Craig and Wright declined to comment on the purchase price for the property, citing a non-disclosure agreement.

Craig said closing on the land was a big first step.

“The announcement today isn’t just a flyer we threw out there to say ‘Hey, we’re here,’” Craig said. “We’ve been working on this for almost three years now, and this is very much the culmination of those years of effort. Right now we’re at the point of executing leases.”

Craig said his company would pull the trigger on construction once the project is 50 percent leased.

Pangraze said she was hopeful that the first of two phases of the development would break ground within the year.

An outlet mall development near Winding Brook has been talked about for years.

A mall was slated to be part of Winding Brook, less than a mile south on Lakeridge near the 150,000-square-foot Bass Pro Shop on land developed by Holladay Properties. Pangraze said Craig started negotiating with Wright’s property companies, Northlake Land Investments and Dominion Land & Development, about six months ago.

Wright, who owns more land in the vicinity, said his site was well suited for the outlet center.

“It’s a good piece of land,” he said. “It’s flat and easy to develop. It’s got great access to the highway. Craig is a quality developer, and I think this will do a lot to get a critical mass of retail in the area.”

Just what we need–another mall.

All I can say is it is about time. Can’t wait! Now we just need a Kroger up there.

So whats going to happen to VCC?

Have you been to VCC lately? VCC has been dying a slow death for the last three years a least. Every time I walk in there another store is closed.

No kidding – I give it a year or two before it goes belly up. If this outlet mall gets started soon, it may be the final nail in the coffin for VCC.

Now that I’m thinking about that, why didn’t they just buy VCC and retool into an outlet mall?

I was just at the Williamsburg outlets last night and commented how great it would be to have an similar outlet shopping center in/around Richmond. The williamsburg outlets, despite thw cold, were flooded with people. I’m curious to see what shops would be at this center.

I thought Hanover claimed to be rural?

The local economy got roughed up pretty badly by the Recession. Being a county hostile to business and reliant on farming and cottage industries was retroactive before – now with half of Ashland under vacancy signs, the folks in Hanover are doing a different dance about development.

As many shoppes that are in driving distance from there why is there a need to have more unnecessary development?

This location is going to kill it. Williamsburg gets all the traffic from I64 going to and from the beach. I95 has a lot more traffic

Why on earth would they name it “outlets of Richmond, instead of Ashland or Hanover???
It’s not in Richmond!! What’s up Ashland supervisors? Why would you allow that name?
So disappointed. Ashland or Hanover would be a more positive name!

1) The supervisors probably have no say in what the developer names this project.

2). Outlet malls are typically regional in nature. Richmond is a much more regionally known name than Ashland and Hanover. Someone in North Carolina or MD may know where Richmond is but not Ashland or Hanover.

@Sharon “More positive”? What does that mean? Like it or not, Richmond is the major City in central VA and this project would not be happening if RVA were not just down the road. These projects rely on people coming from all over…many of those people want to do other things on their travels…things that quite frankly are not available in Ashland/Hanover. Marketing the shops as Richmond ties in all the great recreation and entertainment RVA has to offer. How was this not obvious?

Why does everyone complain when someone has ideas for development in Richmond? Sounds so much like the debacle surrounding the baseball stadium for the Flying Squirrels, already loss one baseball team, believe me the Squirrels will be next, because everyone complains when developers attempt to do something to bring revenue to Richmond, now its an outlet mall … guarantee the same people complaining about it, will be the same ones shopping there for Christmas.

Any recent news on this?