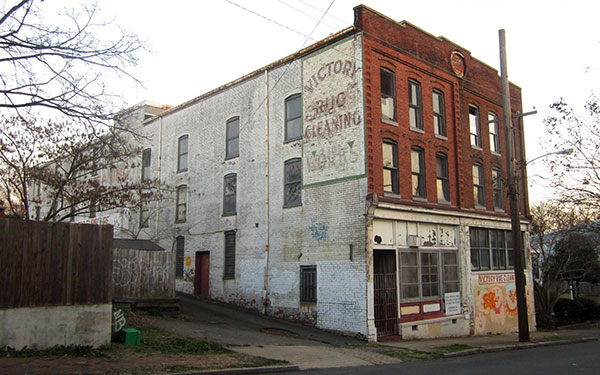 Clarification: In the revised plans for the Victory Rug apartments, the developer will provide eight parking spots, not 15 as originally stated.

A local developer pulled off some last-minute acrobatics and sent his controversial development in Oregon Hill sailing through the planning commission on its way to City Council.

Guy Blundon of CMB Development, who is planning a rehab apartment project in the old Victory Rug building at 407 S. Cherry St., on Monday struck an eleventh-hour deal with the Oregon Hill Neighborhood Association to drop its opposition to the development, allowing Blundon to gain unanimous approval for his project at the city planning commission.

“We finished that deal outside before the meeting,” Blundon said. “We signed the papers just before going in.”

In exchange for having the neighbors back down, Blundon agreed to restrict VCU students from leasing the units, other than “clearly responsible adults” such as military veterans and married couples.

The neighbors had launched vociferous opposition to Blundon’s original plan to build 24 apartments in the 18,500-square-foot building, using an adjoining vacant lot for parking.

After more than a year of wrangling, Blundon reduced the number of units to 12, and he will use part of the vacant lot to build a three-bedroom, single-family home that will screen the parking lot from its frontage on Albemarle Street.

“These are going to be unusually large apartments,” Blundon said at the hearing. “Rents based on price per square foot are going to be significantly lower than in comparable properties.”

Blundon originally estimated the cost of the development to be about $3 million. The final cost, with the reduced number of units and the addition of a 2,000-square-foot house on the vacant lot, isn’t yet clear.

He is financing the project with Xenith Bank.

Blundon told the planning commission he was going to ask between $1,300 and $1,800 per unit for rent.

Todd Woodson, the treasurer of the Oregon Hill neighborhood association, told the commission that the neighbors were still not thrilled about the impact on parking in the neighborhood – Blundon is providing 8 parking spots – but that the developer’s effort to keep students out of the apartments was enough to warrant their support of the final plan.

Several residents did speak out against the project at Monday’s meeting despite the neighborhood association’s official stamp of approval, saying that the language in the agreement didn’t go far enough to exclude all students from living in the apartments.

Residents have maintained that the large number of VCU students living in the Oregon Hill area drag down the neighborhood because they make too much noise.

Amy Howard, a University of Richmond professor and member of the planning commission, questioned the deal to keep VCU students out, asking if it might be discriminatory to exclude students.

Blundon said it was a tricky solution but one he thought would pass legal muster.

“I’ve checked with my lawyer on this one, and it turns out that college students are not a protected class,” he said. “It’s a minefield, but I think it’s doable.”

Blundon said that as long as he was not specifically discriminating against anyone for matters such as race or age, he should be able to stick to the agreed upon restriction.

Blundon and his company CMB Development most recently developed the Link Apartments in Manchester in partnership with Dominion Realty Partners and Grubb Properties. He has also developed senior housing apartments, including the Atlantic at Twin Hickory and the Atlantic at Brook Run.

He’d actually probably cause less trouble if he discriminated on age vs status as a college student. If I understand the law correcty, age (specifically youth) is not a protected class except against people 40 and older (and I’m not even sure that applies to housing). For instance, he could say no residents under the age of 25 (I think the Prestwould condominium building has a similar statute: the primary resident must be over 25). This is how senior living facilities are permitted. I’m betting he agreed to the “no VCU student” agreement knowing that it would be fairly easy… Read more »

He is prob safe on Fair Housing issues for Age and Matriculation (students). And sounds like Oregon Hill residents just learned how to address their concerns in the future. A future without newly-educated people wanting to live in Oregon Hill.

Actually the developer is only providing 8 off-street parking spaces.

At least Henricofield cul de sacs don’t have people throwing beer bottles in their front yards and they have a place to park their cars. I’ve lived in the neighborhood for 6 years and the level of neighborhood respect of owner’s vs. renters has a large gap. The compromise of 12 apartments is a much better outcome than what was originally proposed. I just feel that people who read this article and don’t live in the area should know that where the residents’ concerns lie is the parking and the increase in graffiti, littering, and destruction of personal property that… Read more »

There is also a substantial number of renters and VCU students in the Fan, Carver, and Jackson Ward, so I am not so sure the logic holds up for sagging down the neighborhood.

Perhaps what’s actually holding down the neighborhood are slumlords? inept property owners? too much resistance to development few are willing to make new investments?

Ditto what Jason said. The neighborhoods he mentioned also have permitted resident street parking which OH has refused for years, thus causing the very shortage of “free” parking they complain about today.

How’s the atmosphere of the neighborhood in this places? Is this a safe street?

As a resident, I would like to confirm Christina’s comments. And by the way, I hear the same complaints from residents in the Fan, Carver, and Jackson Ward. There’s a reason there is now a City noise ordinance and a Fan party patrol, and that reason is too many students who either don’t know how to live in an urban neighborhood or don’t care to learn. VCU has done some good things for Richmond, but it’s community relations suck despite its nonstop p.r. campaigns. I think its pretty telling that even though an agreement was reached there are still haters… Read more »

Thank you Jason and Stuart… pretty soon no one is going to take Oregon Hill’s complaints seriously–in some instances, that’s already happening. I wonder if the neighbors have actually introduced themselves to the students and made an effort to formulate a relationship?

The fact that being married or a veteran automatically classifies you as a responsible adult is amusing to me.

Jesse i wouldn’t consider being on my death bed or married “responsible” either. I think owning a home and caring what happens around me, makes me responsible. I’m in my 20’s and care a great deal about what happens in Oregon Hill. I can say yes i have intorduced myself to the neighbors. I can name every single person who lives 3-4 four houses to the left and right of me. I walk my dog as do others and we greet each other when we do. We look out for each other when we see things that shouldn’t be happening,… Read more »

Could a parent of a student sign a lease making the lease is between the landlord and non-student?

I don’t know the answer Cristina, but what good has no parking restriction done for the neighborhood? If it was an effective policy we wouldn’t have to listen to the constant griping about VCU students taking all the neighborhood parking. To the point about parked cars impeding traffic on Cherry Street, the city should prohibit parking there since the ROW is so narrow. That’s a separate issue from the occupancy of the adjacent buildings. The character of OH has certainly changed in the last couple decades, and not just in the number of students. In the 90’s the neighborhood had… Read more »

I live in the neighborhood and the Oregon Hill Neighborhood Association does not speak for me. Im embarassed by this. I moved here for differsity and open minded people. Look what I am getting. Why does someone move to Oregon Hill if they dont like VCU? Theres plenty of room in the suburbs for close minded people. Please move.