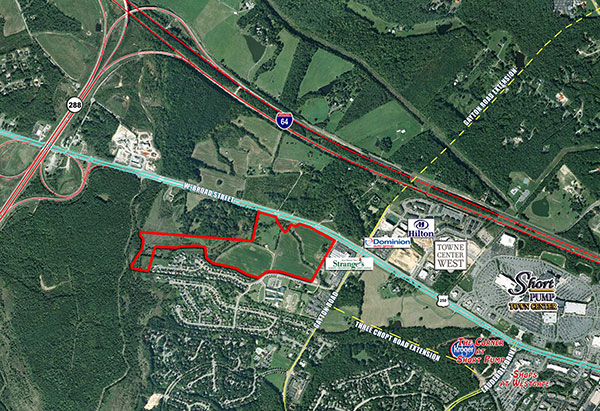 The local private equity firm – which over the past year raised $53 million in new capital – purchased 75 acres of farmland on West Broad Street at the western edge of Henrico County.

The properties are west of the North Gayton Road extension.

Mark Douglas, a senior vice president at Cushman & Wakefield | Thalhimer, represented the Nuckols family in the sale of their land and represented Markel | Eagle in the Worcester deal.

The company paid about $8.5 million in cash for both parcels in a deal that closed in just under 30 days.

J.B. Gurley, a principal at Markel | Eagle, said the company is working with land planners to figure out what to do with property. He hinted that a mixed-use development could be in the works.

“Through our involvement in West Broad Village, we have been well schooled in what works and what doesn’t work in a mixed-use project. And we plan to apply those lessons to the future development of the property,” Gurley said.

Markel | Eagle has, from its inception in 2009, invested in distressed and foreclosed properties. Its most visible project is West Broad Village, a bustling mixed-use development that recently added an ACAC gym as its latest tenant.

Ricky Core, principal at Markel | Eagle, said the latest purchase is a natural move for a firm with deep pockets.

“Market conditions have shifted somewhat from distressed, bank-owned projects, but there is continuing distress in the finance markets,” he said. “So it gives an all-cash buyer a competitive advantage.”

Markel | Eagle in November closed its second fund after raising more than $53 million from investors in less than a year, part of which it used to buy the land in this deal.

Is this the same property, or does it border the property, that Lingerfelt was looking to develop a medical center on?

This is great news for Henrico. I wish the developers success with the project. I wonder if they would consider hiring a planner to avoid the design concerns of West Broad Village, particularly the traffic pattern going in and out of the property. I also wonder how many county officials are salivating over wasting more of the publics money on eminent domain proceedings regarding this area?