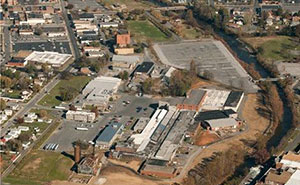 The 41-acre riverfront property known as the Mill at South River. (Courtesy of Rebkee)

Rebkee is on a roll.

The Midlothian developer closed Dec. 28 on a 480,000-square-foot former textile mill in Waynesboro, Va., for $1.75 million, at least its third deal in the past month.

The 41-acre riverfront property, known as the Mill at South River, was initially listed for $5.8 million. The property was owned as part of an estate by Beverley Shoemaker, a Northern Virginia resident who also financed Rebkee’s purchase.

Sitting at 200 W. 12th St. in Waynesboro, the property is about 100 miles northwest of Richmond in the Shenandoah Valley.

He said that the company is trying to figure out what to do with the mill but that it plans on pursuing historic tax credits for apartments as part of the future project.

“It’s already got an income stream, so that makes me a little more comfortable,” Hargett said. “It’s got some interesting tenants already. It’s got a glass blower, a steeple maker, Waynesboro Health Department. It’s going to take a while to figure out what works there.”

The mill property has about 150,000 square feet already leased. Rebkee is working with Charlottesville-based Blue Springs Development on the project, Hargett said.

Shoemaker recently completed a $5.5 million soil remediation project at the mill to prepare it for future development.

Robby Brownfield and David Crawford, brokers with CBRE, represented Shoemaker in the deal.

Fascinating: buy something enormous, then figure out what it might be good for. I wish them luck. OTOH, at bargain-sale prices everything starts to look attractive.