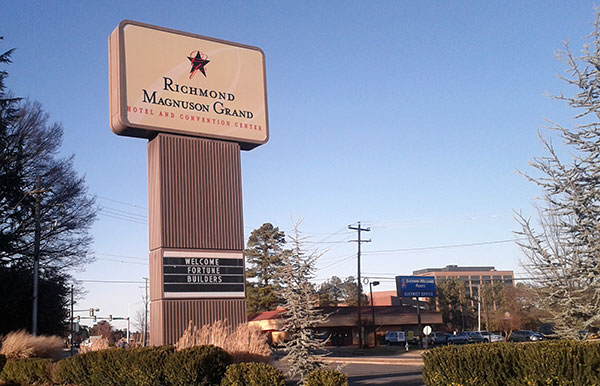 A hotel on West Broad Street has a new flag and a new owner.

The former Crown Plaza West near West Broad Street and Dickens Road is now the Richmond Magnuson Grand Hotel and Convention Center after it was purchased on Dec. 19 for $2.5 million.

The new owner is SN Holdings LLC, a company out of Portland, Ore. It purchased the 282-room hotel, 6.7-acre property from Columbia Sussex Corp., a Kentucky-based hotel operator.

The property was most recently assessed by Henrico County at $3.3 million.

SN Holdings does not have a listed phone number, and its address corresponds to a Portland shopping center. Derek Haught, vice president of finance at Columbia Sussex, would not comment on who is behind the SN Holdings.

Hotels in that stretch of West Broad have had a rough run recently. BizSense reported in November that the Embassy Suites near Broad and Glenside was headed to foreclosure.

According to the latest report from the commercial loan tracking firm Trepp, the Embassy Suites is scheduled to transfer to a special servicer in April.