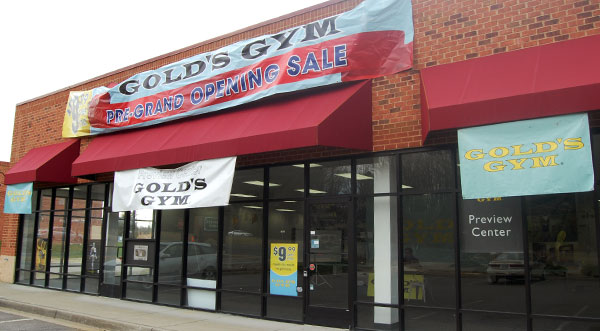 With Richmond’s first Fitness Evolution health club opening on Brook Road, Gold’s Gym leased a storefront about a block away in the Brook Run North shopping center and draped it with a colorful “pre-grand opening sale” banner.

But Gold’s isn’t opening a gym in the Northside retail space.

Gold’s is simply flexing its marketing muscle and calls the small space a “preview center” that directs potential customers to the gym’s Willow Lawn location five miles away. 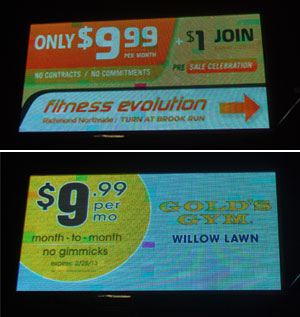 Instead of treadmills and stationary bikes, the center comes equipped with a single attendant sitting at a folding table, handing out information about memberships to the Willow Lawn club. The attendant said the bulk of potential customers wandered into the space expecting to find a new gym.

The Gold’s at Willow Lawn also snapped up a placement on a nearby digital billboard, advertising the same $9.99 a month “no gimmicks” special as Fitness Evolution on its billboard ad. Both offers expire at the end of the month.

And Gold’s lined the road leading into the shopping center with signs.

The general manager of the Willow Lawn Gold’s did not return multiple calls over several days requesting comment about the banner.

“I think Gold’s probably saw a major competitor leaving the area, and decided to take a swing at any members that were left homeless,” said Paul Summers, owner of the new Fitness Evolution and the company’s president of franchising.

“If it’s had an effect on our membership numbers, I haven’t seen it. We’re already ahead of where we thought we’d be at this point.”

Fitness Evolution took over the 32,000-square-foot facility at 5750 Brook Road this year after American Family Fitness relocated to the Virginia Center Commons.

Summers said Fitness Evolution would completely overhaul the facility. That includes making major renovations to the pool and installing about 100 pieces of cardio equipment.

The Northside spot will be Fitness Evolution’s first location in Central Virginia, but the club has staked out territory in California, Washington and Maryland. Gold’s has seven gyms in the Richmond area, including locations in the Fan and in Midlothian.

“At the end of the day, convenience is going to trump everything,” Summers said. “People that live in this area are going to realize that, instead of driving four or eight miles to another facility.”

Love this story. Take it to em Golds!

Excited for this new gym to come in since AmFam was outdated and Gold’s Gym at Willow Lawn is getting to crowded.