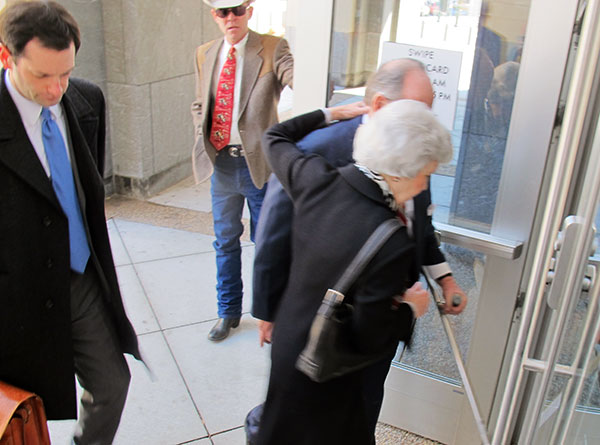 Mary Ferguson supports her husband, Allen Mead Ferguson, as they enter the courthouse.

Ferguson, 75, was also ordered by U.S. District Court Judge Henry Hudson to pay $2.94 million in restitution. The judge will allow Ferguson to remain free until March 18, when he must report to a minimum security prison.

Hudson emphasized that Ferguson submitted false loan applications 13 times to several different banks to the tune of $5 million, calling it “a calculated scheme over a period of 5 years.”

Ferguson pleaded guilty in November after being charged by the U.S. Attorney’s Office. The charges stemmed from millions of dollars in bank loans Ferguson secured after lying to several banks about his wealth in order to continue borrowing money.

With dozens of supporters lining the courtroom, Ferguson expressed guilt and regret for the pain he had caused his family.

“I will live with that remorse the rest of my life,” Ferguson said.

Choking up at one point, he said he wished he could go back.

He apologized to the banks and said he thought at the time that he borrowed the money that he had enough assets to pay them back.

“I was wrong. I’m at your disposal,” Ferguson said to the judge. 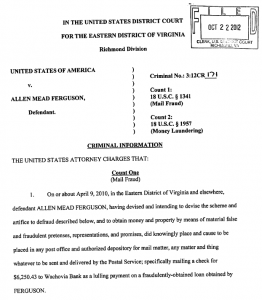 Prosecutors from the U.S. attorney’s office sought 36 months in federal prison for Ferguson. His attorneys had pushed for a sentence of supervised release with three years of home confinement, community service and restitution rather than prison.

Assistant U.S. Attorney Jessica Brumberg argued at Friday’s hearing that Ferguson’s background in the financial industry made him different than other defendants in such cases.

“He well knew the importance of providing true information to financial institutions,” Brumberg said. “He was and is sophisticated. He knew better than the average borrower.”

Ferguson had been allowed to remain free from the time he was charged in October. During that time, almost 50 of his friends submitted letters to on his behalf, extolling his character and generosity.

The letters – written by a who’s who of the local business community – implored his attorneys to push the judge to consider Ferguson’s philanthropy, age, health and supposed public humiliation as reasons for leniency at his sentencing.

“He was generous in his donations, but unfortunately a lot of that was stolen money,” Judge Hudson said, adding that it appears that much of Allen Ferguson’s income in the last few years leading up to his bankruptcy was the money he received from the bank loans.

Ferguson and his wife, Mary Rutherfoord Mercer Ferguson, who are known for their involvement in the Richmond philanthropic scene, filed for personal bankruptcy in early 2011, their wealth having apparently been largely diminished.

The bankruptcy revealed a lifestyle and social status that was running a $20,000 deficit every month.

They were eventually forced to liquidate their assets, including their homes, furniture, artwork, membership interests in the Country Club of Virginia and other effects that have helped recoup about $3 million for creditors.

Their personal bankruptcy also led to the sale of Mary Ferguson’s family rug cleaning business and commercial property around Richmond.

It was during the couple’s bankruptcy hearings that Allen Ferguson, once the head of old-time Richmond investment banking firm Craigie, admitted to lying about the existence of millions of dollars in investment assets to secure more loans.

The couple was eventually sued by the three banks that had been deceived: Union First Market Bank, Wells Fargo and EVB.

The FBI, IRS and U.S. Postal Inspection Service were all part of the criminal investigation that led to the charges against Ferguson.

Mary Ferguson was not charged in the criminal case.

Irresponsible and debt-addicted? Sure. But… “Ferguson submitted false loan applications”… so did about half the country, and they’re all getting mortgage bailouts courtesy of the rest of us. Sucks to be the rest of us…