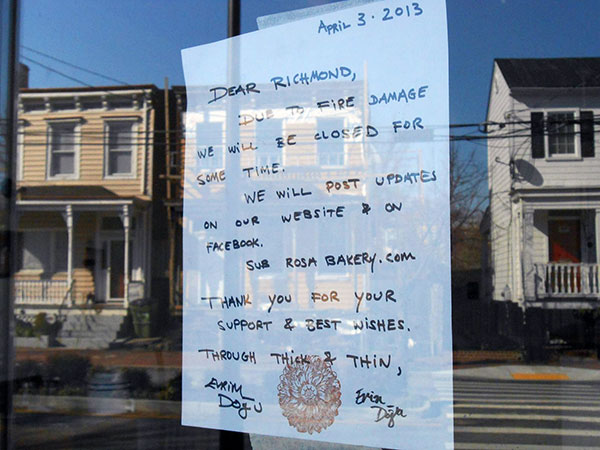 A message to patrons posted Wednesday at Sub Rosa. (Photos by David Larter)

Evrim Dogu, who co-owns Sub Rosa Bakery at 620 N. 25th St. with his sister Evin, said most of the fire damage was to the apartment above the bakery. Dogu co-owns the building with his father. 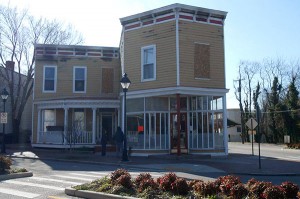 The bakery’s Church Hill building after the fire.

There’s no timeline for when Sub Rosa will reopen, Dogu said. They’ve started filing insurance claims and applying for building permits with the city, and he said they are exploring other ways to keep baking.

“We’re going to find some way to bake,” Dogu said. “We can’t keep our hands out of it for too long. But we’re still trying to figure out the best way to rebuild Sub Rosa.”

Dogu said the owners of Dutch & Company, a nearby Church Hill restaurant, offered the use of their kitchens in the interim.

The offer was one of many the bakery received as word about the fire spread, he said.

“The outpouring of support from the community has just been overwhelming,” Dogu said.

RVA Street Foodies and Hardywood Park Craft Brewery are donating some of the proceeds from their weekly food truck court Thursday to the rebuilding effort. Lamplighter Roasting Company will sell a blend of Sub Rosa whole bean coffee to benefit the bakery.

Corey Lane, a neighbor of the bakery, set up an online campaign to supplement the insurance money. The goal was to raise $5,000 over two months – a goal that was met in less than 12 hours.

“Corey asked if he could set up a fundraising campaign for us. I thought this would be something months down the line. It was online five minutes later,” Dogu said. “We’re incredibly thankful.”

Nice to see such great support from the local community – kudos to those helping out and good luck to Sub Rosa!

Awesome support from local Richmonder’s. It’s nice to know people are there to help in hard times like these. I wish the best for Evrim, and hope they get back on their feet soon.

What a positive story of community and humanity. I hope, in concert with the efforts of the community, the bakery is able to resume operations soon.

Has anyone figured out how the fire started? So far the answer given is spontaneous combustion.

I love Richmond. It’s so pleasing to see all the foodies banning together to support one another. Such a great community.