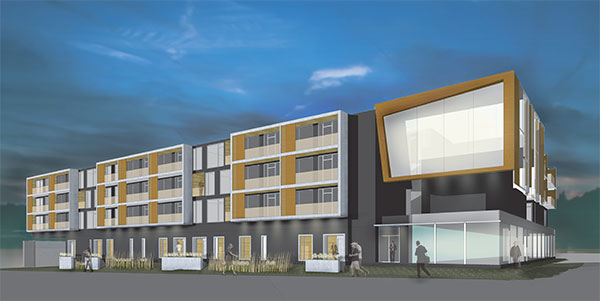 A rendering of the planned 75,000-square-foot Port RVA apartment building. (Courtesy of SMBW)

Correction: A previous version of the story said that firm SMBW designed the Port RVA project. Joseph F Yates, Architect designed the project and is collaborating with SMBW.

Tack another 102 onto the tally of new apartments in Manchester.

But developers Sam McDonald and Mark Scordo of Property Results have something a little different in mind for their planned $10 million project on the site of a long-vacant Burger King at Fifth and Hull streets.

“At some point, the market is going to turn, and apartments are going to be more difficult to develop,” McDonald said. “When we looked at all our properties, we noticed that the units that had the least vacancy and were the easiest to lease up were all the smaller units.”

With that in mind, units at the new project – dubbed Port RVA – will be between 400 and 600 square feet, McDonald said.

“There shouldn’t be anything in there more than $1,000 per month,” he said. “I think the market may be missing a segment of the population who may want to live downtown but are being priced out.”

McDonald said the apartments would lease for between $700 to under $1,000 per month.

Scordo said the goal is to break ground this summer on the 75,000-square-foot project, which Joesph F Yates, Architect designed collaborating with SMBW Architects. MGT is the contractor. Xenith Bank is financing it.

The project includes an outdoor pool, a two-story fitness room and a balcony for every unit.

“If you are trying to find apartments this size with outdoor space, it would be hard,” Scordo said.

Property Results in August bought the one-acre lot for $550,000. The developers also own a vacant gas station next to the Port RVA site, but the lot will largely be used as surface parking for the project for now.

They plan to have the development finished by summer 2014, when it will join a competitive Manchester apartment market. More than 600 apartments have either recently opened, are under construction or are in the planning phase.

Sounds like a great project and it provides a unique alternative to the existing apartment inventory in the market. Glad to hear great amenities will be part of this too.

Now there is a 4 story apartment building the Belle summit should be jealous of.

Belle Summit is going to be a dump and unleaseable like The Links is….And a $1000 for 600 square feet….I am sorry if they think there is a market for that they better do some more researching….All this is gonna do is drive the rent up on the older apartments and leave Manchester abandoned

I doubt if this will leave Manchester abandoned. With all the building/revitalization of Richmond (especially the riverfront), Manchester will be more and more desireable because it will be one of the places that is “close to everything” people want to be near. I give it until 2015-2018 and it will be a different/better Richmond.

Joseph F. Yates, Architect is the architect of record and SMBW is working with them. Mike Koelzer is handling the structural and Timmons is the civil engineer. While these aren’t quite the micro units now being done in big cities, we certainly have larger square foot units for those that need more space! http://www.propertyresults.com.

Great looking, high visibility project that will dramatically change the face of Manchester and Hull Street. This is a game changer.

400 square feet? Who in the world would be leasing that? That’s like living in a hotel room. No thanks.

you people are crazy if you think manchester is “close to all the places you want to go”.
There is nothing in manchester. You have to go across the river to do anything. Until there is more commercial development and less apartments, I don’t see people spending too long living over there before they move back to the north bank.

I said…..With all the building/revitalization of Richmond (especially the riverfront), Manchester will be more and more desireable because it will be one of the places that is “close to everything” people want to be near…..key 2 words, will be.

You’re right, as of now, there is nothing in Manchester.

also, i agree, there needs to be more commercial development but i think that is coming with population growth in the area.

Really? How about “to work”. It’s a two minute drive to downtown. And therefore it’s close to the downtown expressway as well. It’s true there are not many amenities in Manchester – for now – but the amenities aren’t that far away either. There are a lot of people who can boast they are two minutes from their favorite shopping and restaurants but have to spend an hour or more of every weekday, five days a week, getting back and forth to work. Who has the better deal?

This has been done in Dallas for years.

There is a lot in Manchester. Great restaurants, a community garden, event spaces and galleries. It is also right next to the James, Downtown, and a mile from VCU. The problem is that people think $1000 for 600 square feet is affordable. The neighborhood has several new apartment buildings, with Monroe Properties owning most of the vacant land in hopes of building more expensive condos and townhouses. Manchester is the hot spot, but it will soon be filled with the upper class, business people that can pay $1000 for a 1 bedroom apartment. As a lower-middle class person, of immense… Read more »

Jordan nice sales job but the development of Manchester has always been an attempt to make more money off an area than it was worth. 5 years back they were looking for $2000 for 400 square feet and that was before all galleries and Restaurants. It is still very much an Industrial Corridor trying to living space but at a price that only a few would pay and they would have at least a decade to get return on that investment. It is a better development place than Shockoe Bottom but Just like Shockoe Bottom Lacks the basics to make… Read more »

Manchester is near the James River !! Everybody doesn’t want to live in the gawd awful suburbs.

I lived in Warehouse 201 for a few years before the parachute factory was redone. It was nice being near the river, but shopping was always far. Getting in and out of those rough roads were hell on a car also. When I was there, you had to cross the river to get to the bars. I’m not lazy, but it’s no fun traipsing across the Mayo Bridge after an evening out. The actual lack of green space in the area was a huge problem for me. Even on the riverbank, you are surrounded with concrete. It just didn’t seem… Read more »