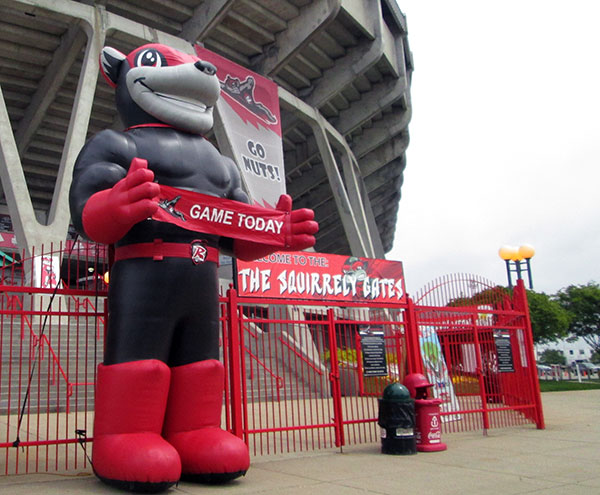 A larger-than-life Nutzy outside the Diamond’s “Squirrely Gates.” (Photo by Michael Schwartz)

Beers from Center of the Universe Brewing Co. and Hardywood Park Craft Brewery are now on tap at the Diamond. They join beers from Legend Brewing and Nelson County, Va.-based Star Hill, which the ballpark started selling last season.

“Just by looking at the lines at the games and communicating with fans, you can tell it has been very warmly received,” Parnell said.

Through the first 31 games, the ballpark is averaging about 6,100 people per game this season. Average attendance last season was 6,257.

The Squirrels worked with Brown Distributing, which represents Hardywood, Center of the Universe and Legend, to get the local drafts in the stadium.

Dave Sorokowski, director of sales at Brown, said the Diamond sold about 150 kegs of Legend and Star Hill last season. Craft beer prices at the stadium run about $6.25 for 14 ounces and $10 for 32 ounces.

“There was a huge demand for it,” Sorokowski said. “Sales were beyond anybody’s expectations. So we’re giving people the option to explore more local breweries, and we’ve had a huge response so far.”

Hardywood co-owner Eric McKay said he expects Squirrels fans to go through between 50 and 60 kegs of the brewery’s flagship Singel this season.

“I think there’s a strong, consumer-driven interest in craft beer at events like baseball games,” McKay said. “And it’s a really exciting opportunity for some cross-promotional events.”

McKay said Hardywood hopes to start selling cans of its Cream Ale at the Diamond this summer.

Center of the Universe’s Ray Ray’s Pale Ale is the Ashland brewery’s current offering at the ballpark.

With at least three new local breweries working to get up and running, Parnell sees continued potential for the Diamond’s beverage selection.

“I’m confident this is something we will continue and perhaps even expand in the future,” he said.

It seems like they are not having any issues with sales but is would be nice if the food and beer were not so expensive. $10 for a beer at a local ball game seems way over the top. Also cheaper food/beverage prices might fill the seats

I know that it is AA, but I was in Cleveland for a MLB game over the weekend where they recently lowered the price of beer to $4 for a 12oz domestic or sell 12oz craft brew for $7.50. So $10 nearly 3 beers is a steal.

Think about how much a pint of Starr Hill or Legend runs at Mekong. I would imagine that it is about $5, so 2x the size for $10 makes this price comparable and at a ballgame nonetheless.

32 oz of Hardywood Singel would cost more than $10 most other places in town, so I consider it to be a win-win. I win because I don’t have to drink the crappy beer that used to be my only option, and I win again because it costs less per ounce than in most Richmond bars/restaurants.

The prices at the stadium are definitely reasonable. In order for a club to be successful, it first has to make money, and ticket sales are not where the margins are. $10 for 22+oz. of craft beer is appropriately priced.

I think the prices at the Diamond are fine honestly. The beer prices are not that bad and $10 gets you a lot of beer! I don’t mind paying for the food as it’s better than the food was when the Braves were here.

Now if they would just lower the price of drinks and popcorn at movie theaters. That is the place where prices are outrageous.

Awesome news. Now how about bringing in some local food!?!? Food carts? Local restaurants? The food offered is so bad I don’t eat there at all. I’m not a food snob, but I do know that adding some local options would enhance the quality and selection of choices and drive revenue for the squirrels and local businesses.

Great to see local brews being offered at the Diamond. Hot dogs, craft beers, and baseball! Doesn’t get any better than that!