Strangeways Brewing owner Neil Burton announced Thursday that his nascent brewery has tied the knot with Brown for distribution, an agreement that is about as binding as it gets in business. 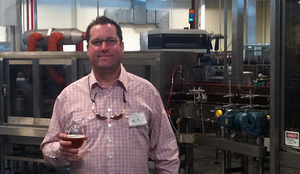 “It was a tough decision,” Burton said. “Loveland [Distributing], Brown and Specialty [Beverage of Virginia] are all good, fantastic people. Richmond is lucky to have three good distributors in the market.”

Burton said the decision to go with Brown was what “felt right for the business” but wouldn’t comment further.

Strangeways’ location at 2277 Dabney Road is directly across the street from Loveland Distributing.

The agreement between a distributor and brewery is permanent. Jacob Brunow, head of the craft and import division at Brown, said that’s because of Virginia franchise laws. Only the distributor can sever the relationship.

Burton said Strangeways is still a couple of weeks out from divulging details on what sorts of beer it will brew and when it will open. But he did say it is operating a 20-barrel system, which is about the same scale as Hardywood.

The brewery will feature multiple tasting rooms, he said.

Strangeways settled on its Dabney Road home after also looking at a space in Manchester, Burton said.

“We needed two things: 18-foot ceilings and M-2 zoning,” he said. “So it was really between where we are and a location in Manchester.”

The location in Manchester needed about $200,000 in upgrades, so he went the other direction. Still, upgrading water, gas and electric to support a brewery was time-consuming and expensive, he said.

Burton would not comment on startup costs for the brewery.

As for a launch date, Burton said there are a few more utility upgrades to go and, of course, he needs to start brewing beer. He said he would announce an opening date soon.

Great news! Can’t wait to see (and taste) what they put out.

Can someone in the know explain to this layman how the arrangement below came to be? Seems like the distributor holds all of the cards. Is there no recourse for the brewer should the relationship go south?

“The agreement between a distributor and brewery is permanent. Jacob Brunow, head of the craft and import division at Brown, said that’s because of Virginia franchise laws. Only the distributor can sever the relationship.”

Seems like this is another law that needs to be changed to help the local beer industry flourish. I too would like someone to explain what the benefit to beer industry overall that relationship has. Seems to me as well that it only favors the distributer.

The article, perhaps, overstates the law. The agreement is not permanent, technically. Rather, the brewer may only terminate it for cause. In this context, “cause” requires some pretty serious acts or omissions. The reason the law is the way it is is easy enough to understand: the distributors are local (brewers are not, generally), loaded with cash and they have excellent lobbyists.

Neil…we can’t wait to taste the beer. I have told a lot of people about your adventure. Best of Luck to You!!