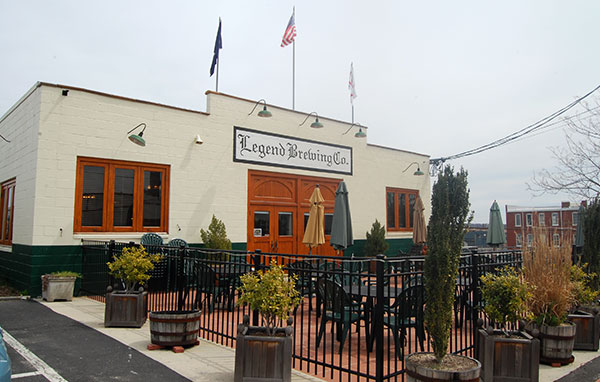 Legend Brewing Company, which celebrated its 19th anniversary this year, is pushing for more visibility in an increasingly crowded craft beer market. With a new head of promotions, the brewery is hitting the streets and getting more creative with its beer names. 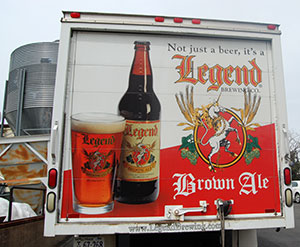 “We were the only game on the block for a long time,” said Dave Gott, Legend’s vice president for operations. “That’s changed.”

When Legend poured its first draft in 1994, it was one of about 540 craft breweries in the United States, said Kevin Timme, who joined Legend about eight months ago as the brewery’s sales and promotion manager. That number is almost 2,800 today.

In the past two years, three new craft breweries have entered the Richmond market.
Center of the Universe opened in Hanover County late last year, Midnight Brewery opened in Rockville last summer, and Hardywood Park opened in Richmond in 2011.

At least four other others – Lickinghole Creek, Archangel, Strangeways and Ardent – are in the works.

There are now 42 breweries in Virginia, according to the Brewers Association. More than 409 U.S. breweries opened in 2012.

“We’re not trying to steal each other’s taps,” Timme said. “But we had a corner on the market for so long, we weren’t hitting the pavement and trying to get our name out there. Now we’re trying to change that.”

And they’re starting with their beer names. The brewery is about to roll out its Urban Legend series, featuring Guardian Dog Doppelbock, Richmond Vampire Imperial Red Ale, Lost City Saison and Locomotive 231. It’s a departure from their usual, more straightforward beer names, such as Legend Lager, Legend Brown, Legend Pilsner and the like.

Timme said that, for the first time, Legend is hosting beer dinners and making appearances at local festivals, and the brewery is the main sponsor this year for the River City Rollergirls, Richmond’s roller derby team. That’s a departure from relying on its tap presence, bottles on store shelves and its brewery/pub on Seventh Street in Manchester.

“We’re trying to reinvigorate Richmond back to Legend,” Timme said.

It’s also raising money to finance a documentary leading up to the brewery’s 20th anniversary, Timme said. The film will chronicle day-to-day operations at the business and include interviews with employees and customers who have been with Legend since day one.

“Getting to 20 years is a huge milestone in this business,” Gott said. “It goes in cycles. When I started here, there were four or five other craft breweries in the area that have all fallen by the wayside.”

With 380 taps in Richmond restaurants, Legend is still the most widely distributed craft beer in town, said Jacob Brunow, head of the craft and import division at Brown Distributing.

He said the brewery’s new marketing strategy is a way to make sure that doesn’t change.

“Legend is used to seeing double digit sales increases, and there’s a little bit less of that now,” Brunow said. “But they’re still in a good position. All the craft beer drinkers in this town were weaned on Legend Brown.”

Legend’s volume in recent years also illustrates the rise in popularity of craft beer. It produced 11,000 barrels of beer last year, more than double from four years ago, Timme said.

By comparison, Hardywood was at 2,800 barrels last summer. Midnight launched with a three-barrel system. A barrel is equal to about 31 gallons of beer.

Craft beer sales nationwide rose 15 percent by volume and 17 percent by dollars in 2012, up 2 percent in both categories from 2011, according to the Brewers Association.

Sean-Thomas Pumphrey, founder of the soon-to-open Lickinghole Creek Craft Brewery, said Legend is part of the reason why so many craft breweries are popping up in the area.

“People can look at them at see how much success they’ve had in the industry,” Pumphrey said. “I think we all hold them in the highest regard.”

He said the businesses want to turn Richmond into a go-to destination for craft beer, and that requires multiple breweries.

“Beer is like any other business,” Pumphrey said. “Some operations that are under-funded or not run well won’t make it, and some will go on to compete with and maybe even exceed Legend.”

Timme, Legend’s marketing director, said he’s confident the brewery will be around for the long haul.

“We’re a brew pub,” Timme said. “We’re not trying to be a dance club or anything else. It’s about keeping those traditions and, at the same time, staying fresh enough to keep bringing people in.”

Legend will do fine. That being said, I’m glad they haven’t decided to rest on the laurels of previous success.

Richmond needs Legend. They started this revolution on a local level.

Judging by the crowd that was there Saturday afternoon, I don’t think so

I met Tom Martin the month he opened Legend and was impressed with his clear business vision. His plan for his first year was to get his beer on taps in 30 Richmond restaurants. Then, the craft beer market in Richmond was a sliver of a splinter of the whole adult beverage market. Now, there are more beer drinkers and craft brewing makes market gains each year. I don’t know how many breweries Richmond can support, but with 94% of the beer market still focused on factory beer, there is room for all to grow. Legend Lager, Legend Pilsner and… Read more »

Legend needs to raise the bar in a huge way at the brew pub with regard to food. I really like many of their brews but find the food to be lacking. Blue Mountain Brewery by contrast has absolutely outstanding gourmet pizzas, for example, and is a true pleasure to visit on all fronts. Would like to see Legend serve up some better chow.

Have you tried the food recently? I hated the food before, but I went in this winter. The food was AMAZING! It was a much needed improvement.

Bring back the Pilsner in bottles!!!!!!! Big mistake if you don’t.

Love the “Urban Legend” series idea. As the owner of Haunts of Richmond Ghost Tours and a proud member of the Legend mug club for over a decade, I would love to collaborate on a pub crawl that features the story behind each beer’s name. We already feature the Richmond Vampire and Locomotive 231 on our tours.

ScottB Legend would love to collaborate with you on a bar crawl.

Legend needs to revamp the menu and maybe even hire a chef. Most of the people I know like the beer but hate the food.

I disagree. I don’t think it’s “too late” at all. Legend’s ability to make great brews, their history, their loyal consumers, and the new generation of beer connoisseur’s……all make Legend Brewing Company, what they are today. A great local business with the ability to produce great beer. Enough said.

I love Legend. They pioneered craft beer in Virginia and I’m happy to see firsthand they aren’t sitting back and taking success for granted. The addition of new beers and adding Hopfest to their regular lineup is great.

The food over the years has been hit and miss. That has changed and I haven’t had a bad meal in a long, long time. Room for improvement, yes, but they’ve come a long way in the 10 years I’ve been going.

They’ll have to pry my mug from my dead cold hands. Viva Legend.

No mention of the ivory stripes!?! The food thing is kind of an issue. I’ve seen movement towards improvement, but it’s been slow. Cut the menu back to what is done well, and then build it back up. Even if you break down the menu to just burgers, fries, and salads. As long as its good people will come back. During lunch you can save money by only offering burgers, and paninis. You can advertise it as a quick option for business people downtown. Spend a week going over each item you have on the menu. How does it look?… Read more »

It’s not always about how much money you spend . How many investors you acquire . Or which degree hangs on your office wall. Sometimes it’s as simple as making a good beer consistently . And time has proven that Legend has done this for almost 20 years. Hope all of us micro brewery’s are as lucky……

I would be very careful if I was Legend in changing the beer names of ALL the brands they have created. I am not sure what they have in mind? People that are sitting in front of a tap or in a store may get confused and move on to something they know. A sample and and explanation is not always possible. Fun names are great but why confuse customers that are already SOLD on the great product. There maybe too many choices already for paying customers. Why not enhance the visibility and attributes of the fine brands that customers… Read more »

other people have nailed it. the beer is good, the food is not. not sure if the food part is relevant in this article though. they are just talking about stepping up their marketing and becoming more innovative/creative with the beers. the new breweries greatly benefit from not having to be brew pubs and offer food. they are also riding the wave of craft beer and food cart fever. it’s a perfect storm for these new breweries. i buy and drink legend beers, but the last time i went there to eat and enjoy the view, the food was terrible,… Read more »

Glad to hear you took up sponsorship of River City Rollergirls, they need support and they’ll get more attention with your help. If you wish to hear of other sponsorhips I have one for you. Sponsorship solicitation will soon go out for the 2014 RVA Environmental Film Festival, clean water = great beer, please consider, Kevin.

I like Legends beer. I buy it all the time. Like many on here I wish the pub was better. I don’t think the food is so bad, it’s the service. Everyone I talk to knows how bad the service is. Waitresses disappearing, forgetting things all the time, not friendly. My friends order two beers at a time because they aren’t sure when the waitress will return. The crazy thing is a few years back they got a new manager and there was an article in the paper about how they were going to change their ways because they knew… Read more »