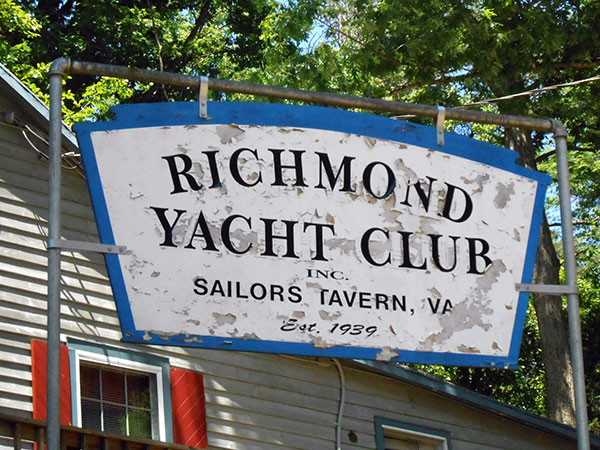 The Richmond Yacht Club is about 15 miles from downtown. (Photos by David Larter)

An Eastern Henrico yacht club has a new owner and a new business plan.

The previous owner, Forrest Parker, sold the business to Walraven on April 14. 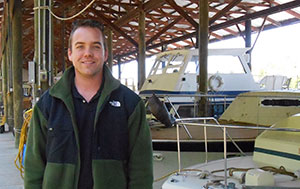 Walraven, 29, has since handed over day-to-day operations of CityStone to his partner Jaysin Hutchinson for the time being. And every day he makes the 30-minute drive out to the marina to clear brush, fix up the office, power wash the docks and plot out his next moves for the four-acre property.

“I think having someone new come in was what this place needed,” Walraven said. “It’s an incredible property. You probably wouldn’t get the permits to do something like this today, so for me it was a no-brainer.”

About 15 miles from downtown Richmond and 10 miles downstream from Rocketts Landing, the property feels like it’s a world away from the core business district. The only noise is from wildlife, boat motors turning over and the occasional rattle of farm equipment.

The marina, at 9950 Hoke Brady Road, is a weatherworn structure that juts into the James River just west of I-295. It has 80 slips, but silt buildup has put 20 out of commission.

That’s one thing Walraven is going to change. 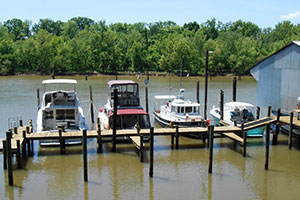 A variety of vessels occupy the slips.

The remaining slips are about 75 percent leased. They’re occupied by vessels ranging from houseboats to 40-foot yachts belonging to Richmond’s lawyers, bankers and developers, but also to hobbyists and “average Joes,” as Walraven says.

The majority of the slips are covered, and those are almost all rented. Walraven said having covered parking for the boats gives the Yacht Basin a competitive advantage over open marinas like the one at Rocketts Landing, which is closer to the city.

The marina has been around since the late 1930s, but the business Walraven now controls was started by the previous owner’s father in the 1950s. Walraven was a family friend who initially offered just to do work on the property, but ended up holding the keys. He would not disclose the terms of his deal with the previous owner.

Walraven is a Hawaii native and University of Hawaii graduate who came to Richmond in 2005. He worked at a property management firm for a year, but it wasn’t for him.

“I realized then that I never wanted to work for anyone again,” he said.

In 2006, he scraped together $15,000 to buy a struggling contracting business, and CityStone was born.

“It was years of burning the candle at both ends, and it was slow at first, but a few years later, it was a couple-million-dollars-a-year business,” he said. “Nobody handed me anything.”

He then began buying up houses in Jackson Ward, Church Hill and Northside for rental properties, something he learned to enjoy.

“I loved the game, the chase,” he said. “And I realized when I looked at the marina business, if I could run rental properties, I could run a marina. It’s not that much different.”

After the brush clearing, power-washing and dredging, Walraven said he wants to convert an old clubhouse on the property into a restaurant. He is working with a chef from a local restaurant group to come up with a business plan and design.

“I’m thinking Mamma Zu meets seafood,” he said. “We’ll do steamed Chesapeake crabs and an oyster bar, but people will be able to get a hot dog or a burger as well. It’s going to be a seasonal restaurant, April to October.”

He is already involved in the food world as a partner in the mobile food stand Goatocado.

Walraven said he wanted to have the restaurant open by May 2014. All told, startup costs for the project, including the restaurant, will run about $250,000, he said.

Long-term plans for the Yacht Basin include building cabins on the property for riverfront vacation rentals. 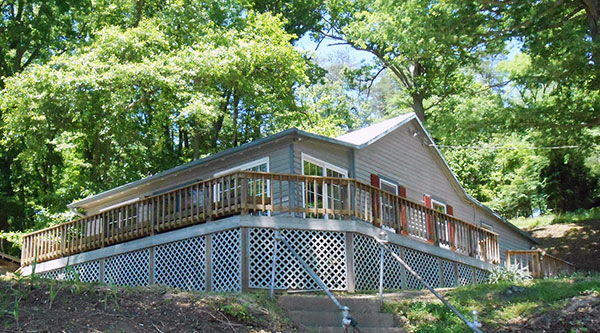 An old clubhouse on the property is slated to become a restaurant.

I feel like the title is a deconstruction of the usual pun. It’s kind of refreshing in a weird way. It was almost like a placeholder you decided to keep instead of “Citystone founder sails into new waters” or something.

Congratulations Max! Wishing you the best of luck in this new venture!

Should have done title search first!

Thank you everyone for the overwhelming response to the article.. People just started driving down today to take a look..
I actually gave one guy a boat ride and history tour of the area! LOL

Not sure what “should have done title search first” means but thanks just the same for your enthusiasm!
Believe me when I tell you that this wasn’t a premature acquisition 🙂

So cool, congrats Max. Lemme know if you need someone to swab the poop deck.

Perhaps just a error in reporters story about majority ownership. I wish you all the sucess in your venture.

The restaurant will be handled by people with restaurant experience right? I had a slip here for four years and love the spot, but hate the sound of “mamma Zu meets seafood” words before hot dog and hamburger.

Zone in, hire restaurant people, do it right. Don’t be another conch republic with a great view but terrible food.

Haha! Kevin: Very funny you say that because I was eating there on Wednesday and said to a friend that I don’t need a million dollar building, I need great food. The menu was actually compared to Applebee’s but my sandwich was surprisingly good. Yes, I plan on it being eclectic, unrefined like Zus atmosphere, but food so good it doesn’t matter what the decor looks like. The crew that is involved are veteran Richmond restauranteurs. I’m not in the restaurant biz and don’t want to start now! Glad you liked the marina. We’ve done A LOT of cleaning up… Read more »

Here is a view of the marina from Google Maps. I can’t say when this was taken, may be a few years old. Best of luck Max!

Congratulations Max. Not just on the most recent acquisition, but your drive to grow and expand business here locally. Best wishes with your new adventure.

Great News!
here’s hoping you keep the sign, it’s a classic piece of Virginia history and would fare well inside somewhere.

This is great. I used to ride my bike there many many years ago. Would get a drink from the machine at the bait store. In my late teens we had friends that had boats there and would party with them on the weekends. Glad to see someone doing something with it. Good luck on your venture. Do you know the history of that area? Find out cause it is very interesting.

Can’t seem to find a website. Would love to see the facility and available berths. Anyone know the website address?