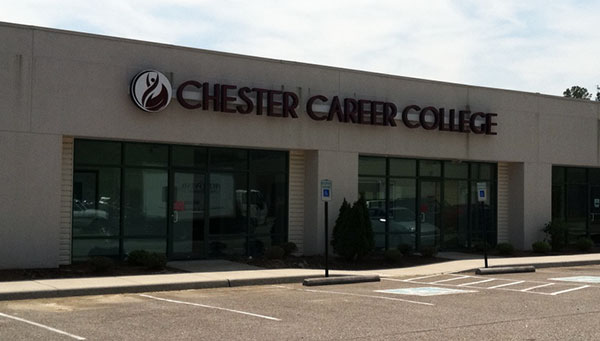 The school formerly known as the Richmond School of Health and Technology. (By Michael Schwartz)

A local for-profit college might be close to ending a two-year legal battle against its former students.

A settlement has been proposed in the class action lawsuit between the Richmond School of Health and Technology Inc. and students who claim the school used deceptive practices to lure them in while allegedly not providing adequate education.

The case, filed in federal court in 2011, claimed Richmond School of Health and Technology carried out a scheme that targeted African American people in low-income areas of Richmond in an attempt to profit from federal financial aid dollars. The school advertised classes for careers for surgical technicians, medical assistants, massage therapists and others. 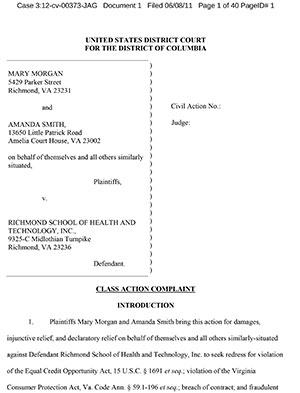 “RSHT is a sham,” the initial suit claimed in 2011. “It exists to make money without any regard for the education its students receive in exchange.”

According to the terms of the proposed settlement, which received initial approval last month in federal court, RSHT would pay $5 million to a pool of potentially any students who were enrolled at the school between July 1, 2004, and Feb. 28, 2013. That could be as many as 4,000 students, depending on how many make a claim.

The Washington law firm that is representing the students has been running ads and attempting to contact the students for participation in the settlement.

“We’re trying to inform people through the ad and also by sending out mail notices to all the individuals based on the school’s records we believe are members of the class,” said Glenn Schlactus, an attorney with Relman, Dane & Colfax.

There is a three-month notice period in order to give class members a chance to respond, and a hearing will then be held in July for final approval.

The $5 million mark was agreed upon during a mediation process last fall that included the school, the plaintiffs’ attorneys and the school’s insurer, Schlactus said.

The proposed settlement allows the school to put an end to the suit without admitting any wrongdoing. And the school has continued to deny the allegations.

RSHT is now known as Chester Career College. The school rebranded this year, according to an employee at the school. It is under new management but has the same owner. It is down to one classroom building at 751 West Hundred Road. It previously also had a large office at Willow Lawn.

A message left at the school for Margaret Knight, who founded it originally in 1997, was not returned by press time.

Ted Brenner, the school’s attorney with Richmond firm Brenner, Evans & Millman, declined to comment beyond what’s in the court filings.

The suit against the school claims breach of contract, fraudulent inducement and violations of the Equal Credit Opportunity Act and the Virginia Consumer Protection Act.

That aid totaled more than $5 million a year, or 86 percent of the school’s revenue, the suit claimed.

“RSHT treats the Department of Education as its source for cash, with the students serving unwittingly as the means by which RSHT enriches itself at the expense of both the students and the public.”

Other for-profit colleges and vocational schools across the country have been caught up in lawsuits in recent years. Allegations range from deceptive recruiting practices to fraud against U.S. taxpayers.

I think this is a very one-sided article. I know several ppl who have attended this school and 2 that are enrolled at CCC now.All have referred family members and friends to the school. Students who were enrolled at RSHT and withdrew have now returned to CCC and are happy and excited to be training there. If you look up their Nursing Program Statistics those numbers speak to the fact that there is definitely good training available at CCC. Indicating that the school has re-branded and is simply under new management is disheartening b/c it suggests that the school is… Read more »

Look all all the new schools in the Richmond area. This school is not alone in feeding off the financial aid gravy train. Anything from cosmetology, truck driving, massage therapy to healthcare worker qualifies. Many of these schools totally rely on federal financial aid. There have been cases where schools were caught recruiting “students” from homeless shelters. They would fill out the financial aid forms for the recruits. Outcomes don’t really matter. It is crazy. We now have over $1 trillion in student loan debt. Now there’s talk that all this student loan debt might be a drag on the… Read more »

I attended RSHT Radiology program. About 13 Out of a starting class of about 28 student finished the program. Out of the estimated 13 around 3-5 people passed the the ARRT board and was unable to obtain jobs and the remaining student was not able to pass the board test due to the lack of training and pressure we under. A 28,000 dollar program, having to pay monthly payments, and the pressure the was applied from administrator had many of us mentally and physically under pressure and stress. I was told class could be transferred that was not true. We… Read more »