An elevation of the Southern Season grocery store planned for Libbie Mill.

Things are heating up for an 80-acre development off Staples Mill Road and Libbie Avenue.

With its anchor tenant already on board, Gumenick Properties has inked a deal with the local CBRE office to handle leasing for the retail and office portions of the newly christened mixed-use Libbie Mill project.

The project was announced in January and had been dubbed Staples Mill Center. 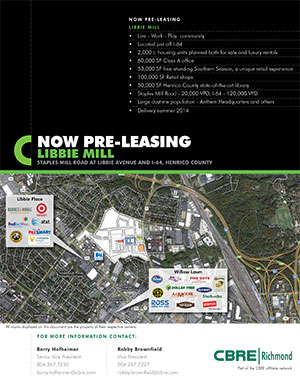 Construction on the store, at the southeast corner of the development between Staples Mill Road and Libbie Avenue, is expected to begin in the fall. That store should be up and running by mid-2014.

But right now, the property is made up of massive vacant grassy lots where an old apartment complex run by Gumenick stood until about a decade ago.

“It takes a creative group, because what you are really selling is the concept,” he said. “You can take [prospects] out to see the site, but it’s just dirt with nothing on it, so people have to trust their instincts and trust the developer. Having Gumenick as the developer, which has such a strong name in the area, really helps.”

Marchetti said the redevelopment of the Shops at Willow Lawn and its proximity to Interstate 64 would help attract tenants to fill out Libbie Mill.

Libbie Mill will be built over 10 years. The first phase will include a 40,000-square-foot retail and office strip. CBRE broker Barry Hofheimer, who is working on the pre-leasing with co-worker Robby Brownfield, said he expects to attract some restaurants to the strip.

“One of the nice things about the development is it will have some wide sidewalks that will be great for outdoor dining,” he said.

The architects for the retail and office portion are Commonwealth Architects and Freeman Morgan Architects. Freeman Morgan, which designed several Ukrop’s and Martin’s supermarkets, is designing the Southern Season store, Hofheimer said.

The library should also be under construction in mid-2014 and open in 2016.

Gumenick’s plans for the development go before the Henrico County Planning Commission May 22 for approval, Hofheimer said.

This is exciting! We need new apartment options in this area. Richmonders love the mixed use concept! We can’t wait to offer our clients apartments at this new community in an excellent location.