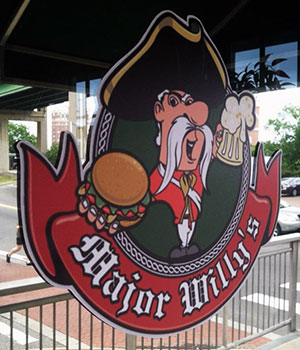 A Shockoe Bottom sports bar has served its last drink.

Major Willy’s, which launched in late 2011, closed Monday night, according to the company handling the property.

The 8,000-square-foot space is on the market, said Sarah Krumbein, a property manager for Fulton Hill Properties. Fulton Hill owns the building at 115 S. 15th St.

“We’re currently talking to several national retailers and local restaurateurs, but there’s no timeline for when we could see a new tenant,” Krumbein said.

Major Willy’s was founded by Dave McComas, the retired chief executive of convenience store chain Fas Mart, along with Chris Postlewaite and other partners.

BizSense was unable to reach any of the owners for comment. The phone at the business rings unanswered.

Krumbein said she couldn’t comment on why the business closed.

Before Major Willy’s, the building housed Stool Pigeons, a sports bar that closed in 2010.

The space is down the street from Buffalo Wild Wings Grill & Bar, the Fish Bowl Bistro and Bar and Cha Cha’s Cantina.

A neighboring space that had long been vacant, the former Southern Railway Deli, was leased this year.

Major Willys was a great idea, the “smoking” policy kept many of us from returning….

Put a Trader Joe’s in there!!!

I would much rather see a national retailer than another restaurant.

I totally agree Sean Cusack. I really liked this place the times I went there but I just don’t go anywhere where there is smoking anymore.

As grateful as I am for the revenue tobacco brings in to the Commonwealth, I won’t go into a place that allows smoking anymore.

Hopefully those 2 hotels finally under construction in the slip will help the restaurants in this immediate area. I know its too late for this place but it is a good location and nice building. Im sure someone else will try.