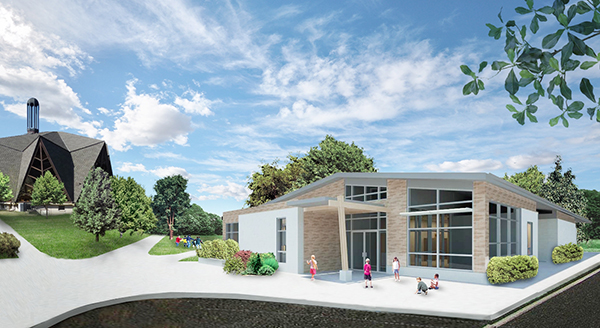 A rendering of the school’s planned new academic building. (Courtesy of Richmond Montessori)

A West End private school has hit the halfway mark in its first major fundraising campaign in more than a decade.

The Richmond Montessori School last month wrapped up the first phase of a $1.5 million capital campaign. The school will use the money to help finance construction of a $3.6 million, 6,000-square-foot academic building that will house three classrooms, a science lab and administrative offices.

Amy Humphreys, the school’s director of advancement, said the first round of fundraising brought in $850,000 over 18 months. The school surpassed its goal by about $100,000, she said. 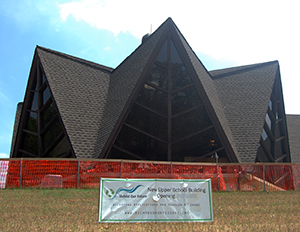 The campus at 501 North Parham Road. (Photo by Lena Price)

“This is the first step in a 10-year plan to expand our campus,” Humphreys said.

Richmond Montessori started expanding about four years ago, when it bought the six-acre parcel of land next to its campus at 499 North Parham Road. The school acquired that property in 2008 for $1 million.

“Part of our strategic plan is to acquire property as it makes sense,” Humphreys said. “When the 501 North Parham campus became available, we knew that we were growing and needed to do something to accommodate everyone.”

The school broke ground on the academic facility in August and hopes to finish construction during the next school year. The project will be financed with a mix of donations, cash reserves and loan money.

Kjellstrom + Lee will handle the construction of the new campus, and BCWH Architects designed the project.

The next phase of the fundraiser, which is still in the planning stages, will help the school build a $2 million gym.

“Having a full-size gym will make a huge difference for us,” Humphreys said. “Right now, we don’t have a space on campus that can hold our entire community.”

Tuition at Richmond Montessori ranges from $8,275 to $12,500 per year. It was the 10th largest private school in Richmond in 2012, according to rankings compiled last year.

Humphreys said the school held its last major fundraising campaign about 15 years ago and brought in $500,000 over a five-year period.

The school had $3.6 million in revenue and $3.3 million in expenses in 2011, the most recent year for which tax figures are available.

The Mary Morton Parsons Foundation gave $150,000 – the largest gift in school history –to the fundraising campaign. Some of the other 156 donors include the Morgan Foundation, the Emily S. and Coleman A. Hunter Charitable Trust, and the school’s parents association.

A gym is planned as part of the next phase of the school’s expansion.