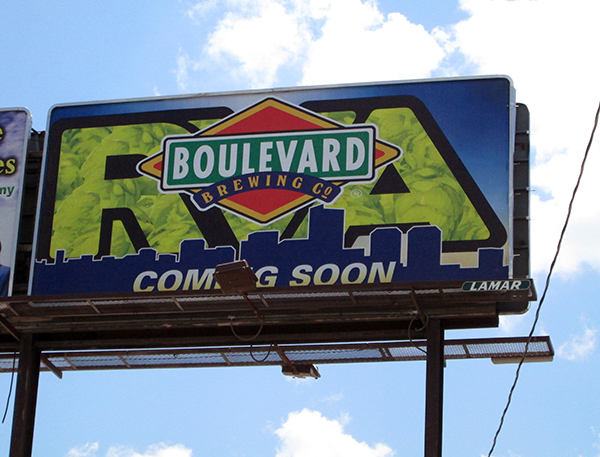 Boulevard Brewing Co. graces a billboard — where else? — on Boulevard. (Photo by Michael Schwartz)

A Midwest brewery’s beers have arrived in Richmond.

A successful release in Washington and Northern Virginia in June 2012 prompted Boulevard’s expansion to the rest of the state, starting with Richmond, said Steve Mills, Boulevard’s vice president of sales.

“We love to pick markets where we can find good partners, and I think we’ve found that in Loveland,” Mills said.

Since then, more than 30 local restaurants and bars have requested the brew. Six-packs of some Boulevard beers will be available in Kroger and Walmart stores late next week, according to Loveland.

“We’ve sold quite a bit in the first few days, and we’re hoping to sell more,” Rollison said.

Mills said Loveland requested another shipment because the first truckload sold out. A truckload of beer contains 1,200 cases, he said. That’s 28,800 bottles of beer.

“To be honest, we’ve been overwhelmed with how well received it has been,” Mills said. “It’s definitely exceeded our expectations.”

Adding Boulevard to its portfolio gives Loveland a boost as it competes in the craft beer boom with local rivals Brown Distributing and Specialty Beverage of Virginia.

Boulevard beer will be available in Hampton Roads in July and in the rest of the state in August, according to a release from the company.

It has distribution agreements with Chesbay Distributing of Chesapeake, serving Hampton Roads, and Blue Ridge Beverage Company, which will cover the western part of the state.

What about Boulevard Pale Ale?? It’s by far the best of their offerings as evidenced by the fact that it is on just about every tap in Kansas City! It’s a real let down for me!