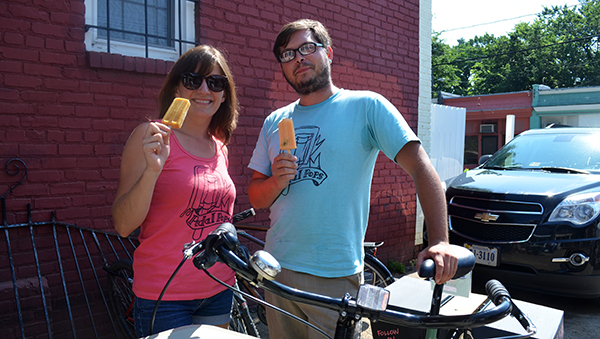 As the summer heat sets in, a new cold treat-peddling startup is kicking into gear.

Pedal Pops RVA sells homemade ice pops from cooler-loaded bicycles. The business is a side project for Sara Williamson, 28, and Frank Bucalo, 30. The pair met in April 2012 at Feast RVA, a fundraising event for entrepreneurs.

Trial runs with shaved ice and juice led the team to pops. After raising $2,000 in an online fundraiser, Williamson and Bucalo fronted $2,000 more to launch the business in May.

“I always wanted us to be like an ice cream truck but on a bike with music so people could recognize us. We’re getting there,” said Bucalo, who is also the founder and owner of Quickness RVA, a bike delivery service for local restaurants. 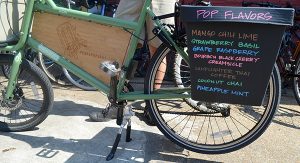 Pedal Pops RVA makes its treats at Big Herm’s Kitchen in Jackson Ward, where it rents space. The business buys its ingredients from farmers markets, local grocery stores and farms, including Agriberry Farm and the Neighborhood Resource Center of Fulton.

Williamson and Bucalo sell their pops on Belle Isle, in the Fan and in Carytown, but they don’t have a set daily schedule. They’re most active on Saturdays and Sundays, Williamson said. The business posts planned locations on their Facebook page and Twitter.

Pedal Pops had some early success at the recent bacon festival in Shockoe Bottom, where it sold 300 pops. The avocado-bacon and mocha-maple-bacon pops were a hit, Bucalo said.

The concoctions aren’t all instant hits. Bucalo described the first batch of beet and rhubarb popsicles as “too earthy.” Maple roasted sweet corn wasn’t exactly a fan favorite, either.

“There are people who are interested in the more unusual flavors, so we encourage people with adventurous spirits to eat adventurously,” said Williamson, a Richmond native who works nights at Stella’s restaurant.

Ice pops sell for $3 each. For now, all the money made from sales goes toward more ingredients, Bucalo said.

The startup has made inroads with local retailers. Both Lamplighter in the Fan and Sweet 95 on North Side sell the pops.

Williamson said the startup is open to providing pops for special events, such as birthday and graduation parties and weddings. They also are willing to make office visits, as long as they can bike there.

Seriously the best popsicles I have ever had