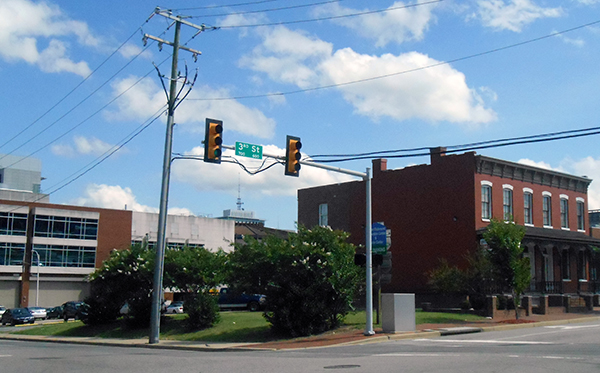 BioTech 10 is planned for East Jackson Street between Third and Fourth streets. (Photos by Burl Rolett)

The Virginia BioTechnology Research Park is looking to extend its reach in Jackson Ward.

Construction for BioTech 10, an $18 million office and laboratory building and new parking structure, is slated to begin this year. The complex, which is years in the making, will be on East Jackson Street between Third and Fourth streets.

“We started the building planning on it three years ago, when we were thinking that UNOS – United Network for Organ Sharing – needed expansion space,” said Bob Skunda, president of Virginia BioTechnology Research Park. “They ended up with an opportunity to acquire an existing building [on Fourth Street], so that’s why we put the project on hold.”

Skunda announced BioTech 10 on Thursday at Venture Richmond’s Downtown Development Forum. The organization will begin filing rezoning applications immediately and intends to begin construction on the parking structure as soon as the zoning is in place. 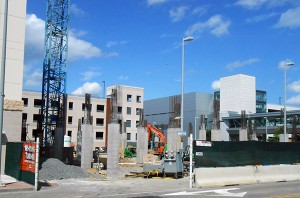 It hopes to break ground on the office space in 2014 on a plot of land owned by the Virginia Biotechnology Research Park Authority.

The sizes of the two projects are in flux, but Skunda said BioTech 10 would total between 400 and 600 parking spaces and between 30,000 and 50,000 square feet for the office and lab space. Construction will take place on a plot of about 1.2 acres.

Skunda said individual office units will be between 2,500 and 10,000 square feet.

“It’s designed in a way we can accommodate multiple companies that need smaller space and aren’t candidates for their own building,” he said.

The organization will seek private financing for BioTech 10. Ashland-based McKinney & Company is the project’s architect, but no contractor has been selected.

A $50 million BioTech 8 upgrade to make room for Richmond-based Health Diagnostics Laboratory is also underway. The second 100,000-square-foot phase of HDL’s two-step expansion is slated to be complete by the end of March.

By the time BioTech 8 and 10 are completed, the park, which opened in the 1990s, will total almost 1.2 million square feet of office and laboratory space among eight buildings.

Although it doesn’t have any specific tenants in mind for the new building, filling space hasn’t been a problem, Skunda said.

“Because we’re 100 percent occupied now, we see the need to get another project in the works,” he said.

And thus continues to the suburbanization of this section of downtown Richmond.

Don’t get me wrong, I’m glad to see the biotechnology sector grow in Richmond. And I’m sure it’ll bring more jobs.

But between the Biotech Park, The Coliseum, the Convention Center, and the countless surface and structured parking facilities, this place is a complete dead zone most of the time.

I’d imagine it’s one of the largest swaths of land in downtown Richmond that is almost completely devoid of any kind of residential or retail space.

Jay, you said a mouthful. Biotech Park took a culturally import part of Richmond and buried it under concrete. Nothing left now of Navy Hill but a stone marker and a plaque. What a lousy piece of urban design.

if the VCU master plan goes through , this area will see tremendous growth , hopefully some of our architectural firms will do these buildings justice. and maybe VCU can make some of them a little taller to handle future growth instead of spread out everywhere . retail has always been a challenge in Richmond , one of the main problems is people do not like to pay to park or risk getting towed away when they do. 17th street farmers market is a prime example. we have more parking decks than we need , and the ones we do… Read more »