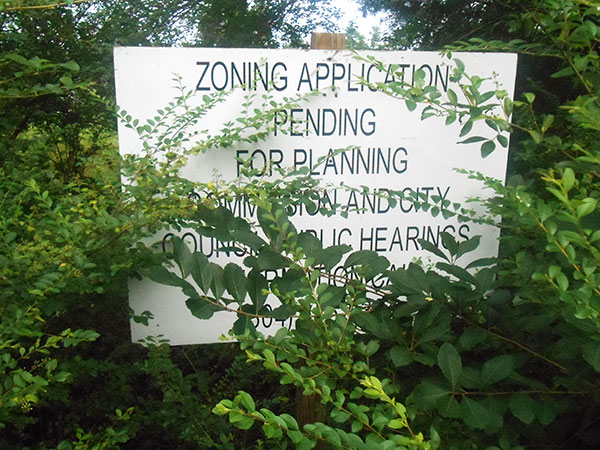 A new 96-home subdivision in suburban Richmond got the green light Monday from City Council, but there are still some trees standing in its way.

By unanimously approving a rezoning proposal, the council allowed for the development of Archer Springs, a 44-acre Southside neighborhood off Duryea Drive near Huguenot Road. Local homebuilder StyleCraft Homes is the developer. The company proposed the project about a year and a half ago.

The development drew opposition from nearby neighborhoods. “Save our neighborhood” signs dot Duryea Drive, and several residents expressed concerns about added traffic, tree removal and the density of Archer Springs. 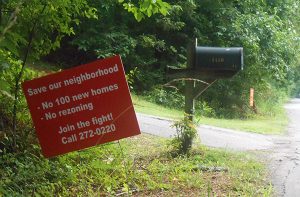 StyleCraft principal Larry Horton will have to bring tree preservation and grading plans back to the planning commission before construction can begin. The tree preservation plan is aimed at protecting trees larger than 36 inches in diameter and 17 feet tall.

Councilwoman Kathy Graziano (District 4) praised Horton and StyleCraft’s cooperation, calling it unusual for a developer to comply with planning commission recommendations and community input but fail to receive a positive recommendation from the commission.

“I have never, ever heard of a tree preservation plan that the planning commission needs to approve,” Graziano said. “Before [Horton] can build his first house, he has to readjust his plans and save those trees.”

StyleCraft will be the project’s developer, agent and lead contractor. The company does not know when it will break ground, Horton said. He told BizSense last year that Archer Springs would cost between $7 million and $10 million to develop.

The project initially called for 102 homes but was scaled back amid pushback from the surrounding neighborhood, said Graziano whose district includes the Archer Springs area. She supported the rezoning plan.

Richmond’s planning commission last week voted 4-4 on the project’s rezoning proposal. The commission’s votes are only recommendations for the council to consider.

StyleCraft has developed more than 10 communities in the Richmond area. Its projects include New Market Village off of Laburnum Road in Henrico, which has move-in ready homes from $170,770, and Hungary Creek in Glen Allen, where homes start around $460,000.

Isn’t it odd, but repetitious, that Special Interests, Media, Big Corporations, and Contractors shout so much louder over the Voices of We The People. Wonder if there are ever any “investigations” into whether these highly Influential entities are Donors? Seems their money talks, demands, and gets. Are there any buy ins for pay offs, or friends with benefits packages in Local Richmond City Government? Citing: Ball Park, Redskins Training Center, Bike Championships with 35 hidden Corporate sponsors, a Corporate building in the middle of the street, and a brand new Community. All of that is Media Hyped as Benevolent without… Read more »

Would RichmondBisSence “investigate” the
appearance of impropriety within Richmond City Council’s overwhelming support of most corporations, contractors, influential special interest groups, over and above the voice of We The People?
Are any of these special entities donors to
the Democratic Political Campaigns.

I’ll just bet they are.
I can be censored and the Media cannot.

Becky’s comment is on target. Companies can go through the rigorous bidding process for City jobs, (which requires a substantial investment of employee time in most cases), be “awarded” jobs, and suddenly be told those jobs have been given to “friends” or other companies favored by City “leadership”. The entire process appears to be a corrupt farce from beginning to end. If your business wishes to work with the City, my recommendation is that you be prepared to spend a lot of time and money gaining the favor of certain high profile individuals first, otherwise expect to get exactly nowhere.