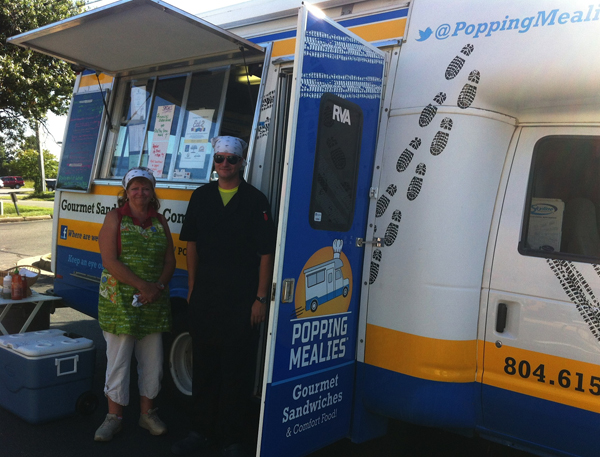 Andy and Kim Rayford as they set up shop outside Strangeways Brewing. (photo by Michael Thompson)

A mother-son team has popped in as the latest entrant in the Richmond food truck scene.

Andy and Kim Rayford in July launched Popping Mealies, a food truck that serves fare such as Gruyere macaroni and cheese and Polish kielbasa.

The two see Popping Mealies as way of being their own bosses and a stepping-stone into the Richmond restaurant scene.

“The dream is to get a brick-and-mortar restaurant,” she said.

Kim Rayford has a degree in business management and a masters of public affairs from University of Maryland University College Europe. She managed a restaurant in Cleveland for about 10 years.

Her son spent two years at VCU before earning a degree in show production engineering from Full Sail University in Winter Park, Fla. in 2005. He has more than 15 years of restaurant experience.

They used a combination of personal savings, credit cards, and a $20,000 small business loan from NASA Federal Credit Union to come up with the $80,000 needed to start Popping Mealies, Andy Rayford said.

The Rayfords saved money by inheriting their truck from a relative in the tile distribution industry. The truck had been sitting unused on a farm for years. While the outside needed restoration the inside was “like a blank canvas” ready for transforming into a restaurant on wheels, Andy Rayford said.

East Coast Custom Coaches in Manassas installed electrical wiring, water pumps, and parts for the mobile kitchen in the interior of the truck for about $25,000 to $30,000. Stone’s Throw Studios in Montpelier did Popping Mealies’ $5,000 vinyl wrap and design on the outside of the truck, Kim said.

The Rayfords cut costs by almost 50 percent by purchasing their kitchen instruments piece-by-piece off of Amazon. Outfitting the kitchen cost $25,000 to $30,000 rather than the $50,000 for a custom designed package.

“You’re looking at about a $1,000 worth a paper there,” Andy said of the patchwork of food truck licenses for Richmond, Henrico, Hanover, and Ashland displayed on the window of the Popping Mealies truck.

Andy Rayford estimated there are 25 to 30 food trucks in Richmond. Other trucks are offering everything from tacos to meatballs. Food truck courts, where groups of the mobile businesses gather, continue to expand with new locations.

For the past four weeks, Popping Mealies has been open once a week in the Strangeways Brewery parking lot, and was on the scene at the Fall Line Fest near VCU last weekend.

Its sales in July were $2,000 when it was operating at limited capacity, and $5,000 in August. The Rayfords expect to continue to do better in September.

Popping Mealies has relied on social media and word of mouth to grow its business, spending almost nothing on marketing and advertising, Andy said.

The mother and son duo are the only employees of Popping Mealies for now.

“If sales continue their trend we plan on hiring another employee after New Year’s,” Andy said.