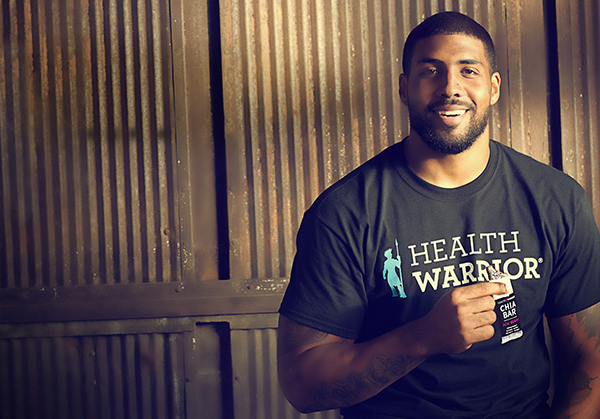 Health Warrior, the Richmond-based seller of chia seeds and chia seed bars, announced that Arian Foster, a running back for the NFL’s Houston Texans, had invested in the company.

The company did not disclose financial specifics of the deal, but Health Warrior chief executive Shane Emmett called it “a substantial investment.”

The arrangement with Foster gives the three-year-old company a celebrity representative to help it try to stand out in an increasingly competitive health food market.

“He’ll being doing more than just being a passive investor,” Emmett said of Foster. “He’ll be representing the business.”

Along with Nick Morris and Dan Gluck, Emmett launched Health Warrior in 2010 after reading of the chia seed’s health benefits.

Emmett said Foster contacted him through a lawyer. They met and spoke several times about the company and its future before inking the deal.

“Having one of the most powerful athletes in the Western Hemisphere is wonderful,” Emmett said. “It shows the way that the [real food] market is going and shows something real and tangible.”

Foster in a news release described his decision to invest in Health Warrior as part of his efforts to reduce childhood obesity and “reinvent the modern diet.”

Foster, who played football at the University of Tennessee, signed a five-year, $43.5 million contract with the Texans in 2012.

In the past 13 months, Health Warrior has grown from having one employee to having nine across the country, Emmett said.

In September 2012, the company announced that its bars would be sold in Whole Foods stores nationwide. A 15-pack of their coconut chia bars sells for $23.50 in Health Warrior’s online store.

The company in June leased space for a headquarters at 1707 Summit Ave. but has yet to move in.

#RVA is a hot-bed for start-ups, and garnering national attention, and I’m for one proud of those who chase their dreams, and bring creativity to this great city. Power to the seed raisers!

Congrats guys! I’m a HUGE fan of the chia seed bars! They’re my go-to snack before soccer and barre classes. I always feel like my endurance gets a boost from the chia seeds during exercise. Excited to see the company growing!