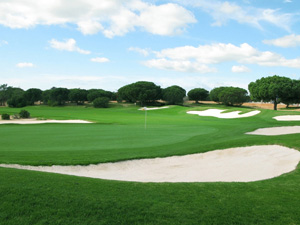 Prince George has remained open for business during its bankruptcy case.

As its owner scrambles for a lifeline, a foreclosure auction looms over a local golf course.

Prince George Golf Club is scheduled to be auctioned by its lender next month. First Community Bank set the auction for 2:30 p.m. Nov. 5 on the steps of the Prince George Courthouse, according to legal notices filed over the last two weeks.

The 113-acre course, about 12 miles south of Petersburg, has been stuck in bankruptcy since February, when it sought Chapter 11 protection to elude a first attempt at foreclosure.

Having gone unpaid on its loan, First Community Bank argued in bankruptcy court that it should be allowed to take back its collateral despite the Chapter 11 protection. A judge agreed, and the bank was granted permission last month to exercise its right to foreclose.

Also last week, the bankruptcy case of Virginia Golf LLC, the corporation that owns the 50-year-old public course, was converted to a Chapter 7 liquidation. With its main asset set for the auction block, the judge in the case found that there was “no prospect of reorganization,” court records show.

The semi-private club, owned by local golf veteran Ronnie Kelley, has remained open for business throughout its ordeal. The property is valued at $950,000, according to Virginia Golf’s bankruptcy filing.

Kelley has raced to find investors to bail out Prince George Golf Club and his other course, River’s Bend Golf Club in Chester. Kelley was forced to put that course in bankruptcy in September as Chesterfield County was pushing to have it auctioned off due to several years of unpaid taxes.

Despite the scheduled foreclosure auction, Kelley said in an email Friday that he’s working on a plan that would prop up both of his courses.

Prince George Golf Club’s main debt is $981,000 owed to First Community Bank. The bank took over the loan from the former Peoples Bank of Virginia, which First Community bought in 2012.

Kelley and his longtime partner, the late Chip Edwards, bought the Prince George course in 1992 for $3.2 million.

Attorney Jim Kane is representing Virginia Golf in its bankruptcy case. He did not return a call by press time.

The law firm Kepley Broscious & Biggs is handling the foreclosure auction for the lender.