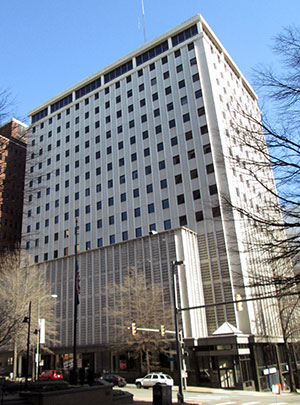 The property at 700 E. Main St. in downtown Richmond. (Photo by Michael Schwartz)

One of Richmond’s largest hotel owners is checking in again downtown.

Shamin Hotels has acquired 700 E. Main St., eight months after it put the 18-story office tower under contract. The company paid $7 million for the 182,000-square-foot property, according to Cushman & Wakefield | Thalhimer, which represented Shamin in the deal. The acquisition was finalized Tuesday.

The company will convert the 50-year-old building into two Hilton-branded hotels – a Hampton Inn and Suites and a Homewood Suites – with a combined 244 rooms. It will have space for a 5,000-square-foot restaurant and a 2,000-square-foot coffee shop on the ground floor. Shamin will pursue historic tax credits on the project.

Shamin chief executive Neil Amin said demolition work could begin in November with a target to begin construction by the end of the year.

“The interior will be completely gutted,” Amin said. “It’s going to be a significant upgrade.”

The company has yet to choose a contractor or architect on the project, Amin said.

The building’s office tenants are in the process of vacating. The U.S. Postal Service will remain as a tenant on the ground floor, Amin said.

Amin said the company is looking to lease the restaurant space to an upscale establishment. For the coffee shop, he said, Shamin might run a shop itself or look to lease it if the right tenant comes along.

The deal caps a busy year for Shamin.

It has completed five acquisitions totaling more than $52 million in 2013.

Its purchases include the former Holiday Inn Koger Center in Chesterfield County for $15 million and the Hyatt Place on South Laburnum Avenue for $10.95 million, both in July.

In June, Shamin acquired a Courtyard by Marriott hotel in Chesapeake for $6.72 million and a Residence Inn in Newport News for $13.05 million.

The company owns more than three dozen hotels in three states, including more than two dozen across Richmond.

The 700 E. Main St. project is a bit of a departure from many of Shamin’s previous properties, in which it has typically looked to acquire and renovate existing hotels.

“It is something new,” Amin said. “We’ve done a lot of renovations to existing hotels so we know how to handle renovations.”

Thalhimer broker Mark Douglas, who represented Shamin, said that the acquisition was a good deal for Shamin and that the renovation would fill a need for new hotel space downtown.

“It’s an opportunity downtown, and they bought it right,” Douglas said.

He said the Hampton Inn will be on the Main Street side of the building and the extended stay Homewood concept will occupy the Seventh Street portion of the building.

Shamin should get a Golden Hammer award from BHC just for planning this project. This is a real benefit for downtown and city tax rolls. And it was done without a multi-million dollar subsidy.

Looking forward to opening and I hope Mr. Amin will consider some exterior lights so the building can join the Grand Illumintion when it is complete.

This is exciting news for Richmond. We look forward to having more hotel rooms downtown and to watching the progress from across the street!