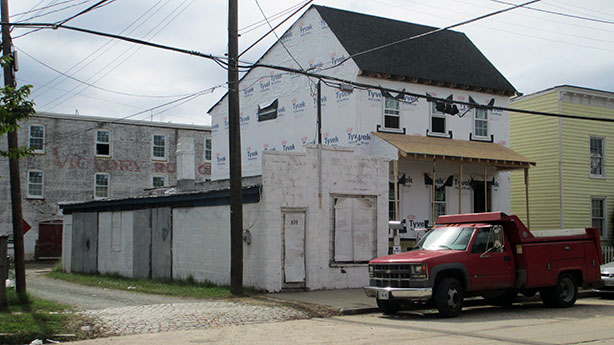 The new house at 811 Albemarle St. with the Victory Rug building behind. (Photo by Michael Thompson)

Construction on a once-debated Oregon Hill development is underway.

The 12-unit rehab of the old Victory Rug building at 407 S. Cherry St. is a few months from completion, and an adjacent three-bedroom single-family home has cropped up at 811 Albemarle St.

The Albermarle Street home is the result of an agreement developer Guy Blundon made this year with the Oregon Hill Neighborhood Association to get the group to drop its opposition to the Victory Rug apartment project.

The house is intended to block the view of a parking lot planned for the apartments.

Blundon, whose CMB Development owns the 18,500-square-foot Victory Rug building, originally proposed 24 units for the building. He cut that in half to appease the neighborhood association.

Dodson Property Management will soon begin marketing the Victory Rug apartments with the expectation of having them occupied by January.

“We hope to finish the building by the end of the year,” Blundon said.

City Council approved plans for the development in January.

Santucci said he expects construction to be completed near the end of December. He’ll then look to sell the property.