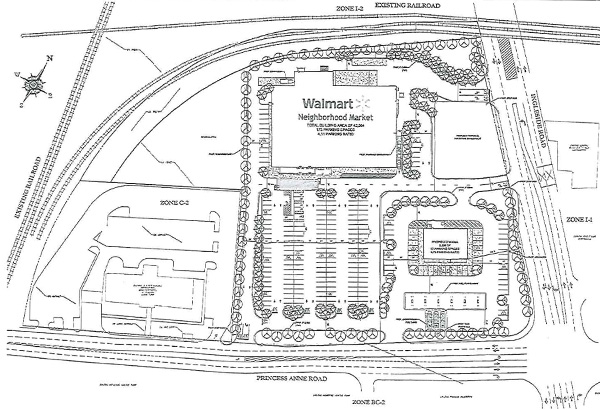 A local developer is close to ramping up a $5 million retail project in Hampton Roads.

Blackwood Development, a Richmond-based real estate firm, plans to begin work this year on a Norfolk area development that will feature a 42,000-square-foot Walmart Neighborhood Market, a Wawa gas station and a third plot that has not been tabbed for any specific development.

“It’s an existing 200,000-square-foot warehouse building that we’re going to be [demolishing],” said Blackwood vice president Marc Greenberg. “Our goal is to begin demolition as soon as we receive site plan approval.”

Blackwood is set to purchase the site from General Foam Plastics Corp., which owns the vacant warehouse that will be torn down. The industrial building dates to 1951, when Sears, Roebuck & Co. owned the property, according to a report from Inside Business.

Blackwood will sell about 4.5 acres to Walmart once the site has been cleared. The Neighborhood Market store is one of 500 smaller concept stores the retail giant plans to add nationwide in the next 18 months.

Blackwood will sign a ground lease with Wawa. The unclaimed third plot could be leased or sold, Greenberg said. Blackwood will be in charge of the project’s site development but will not pay for building construction.

Greenberg estimated the firm’s total costs, including land acquisition, at about $5 million. Blackwood is financing the project with a loan from BB&T. New Jersey-based Bohler Engineering is the project’s site engineering team.

In the Richmond area, Blackwood has developed the Promenade Shops across from Short Pump Town Center, Courthouse Crossing in Midlothian and a handful of other small retail and mixed-use complexes.

The Norfolk project will be the company’s first Hampton Roads development in more than a decade. The firm has bought and sold a pair of projects in Portsmouth and Virginia Beach more recently, but Greenberg says Blackwood plans to keep its latest project for the foreseeable future.

“We tend to try and hold our assets for long-term,” he said. “We intend to maintain ownership of the property, obviously outside the Walmart.”